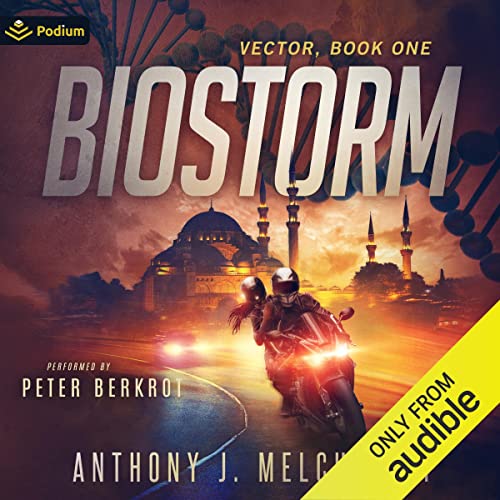 By: Anthony J. Melchiorri
Narrated by: Peter Berkrot
Try for £0.00

Alex Wolfe is an elite agent with the CIA. He has a proven track record of stopping international bioweapons programs. Skylar Cruz is a skilled Marine whose battlefield injury sidelined her from serving her country. When they’re recruited for a brand-new covert-op group, Vector, combating biological and chemical weapons threats, their first mission had better be a success. Because it’s not just their careers at stake. It’s all of humanity.

Wolfe and Cruz embark on a deadly race against bands of mercenaries and diabolical government forces through the bustling markets of Istanbul to crime-infested Russian port cities and Vietnamese jungles hiding forgotten conspiracies. Only they can stop a rampant airborne bioweapon unlike any the world has ever seen.

Danger is in the air. Literally.

Biostorm is the first book in the Vector series, where high-octane action and suspense collide with real science and technology.

What listeners say about Biostorm

This book is another non stop action packed book. the characters really come to life and you can't stop listening to it. only thing I wish was different was the wait to hear what happens next!

The narrator is not right for this book.

I love this author. I've had to increase the speed and then listen to the first hour twice.

After I got over the narrator I could get into the book and enjoy the story. Looking forward to book 2.

This story starts out strong and never stops. The main two characters are epic but also human. Anthony did his research on this book I enjoyed this book and i could not put it down. Great job waiting on book 2.

enjoyed listening to this great spy thriller. plenty of action and intrigued to keep you listening. narrator did an awesome job. recommend it to anyone who likes thrillers

LOVE Skyler Cruz. Alex needs work. Story was good, maybe better than good. Kaseem worries too much and needs to tell his boss to stop being such a politician and worrying more about his people and less about his/her person. Is AW a badass or not? Doesn't seem to be anything more than an average marksman or tactician and his constant concern for peripheral damage appears to put him into introspection inaction. Stop thinking so much! Actually liked the new team more than it sounds but as a retired avionics jarhead, Cruz will keep me interested. Semper Fi

an awsome book from an awsome author. I look forward to reading more books from him

loved it, totally worth a binge read on 2nd shift. Then read again because hey why not!!!!

I just can't get into this story

I have tried to get through this book. it's been 2 months on again off again and I am only 2/3 into the story.

The story line was very good, it kept me engaged but at the end it dragged a little. The narrator was monotone at times. Overall it was good .