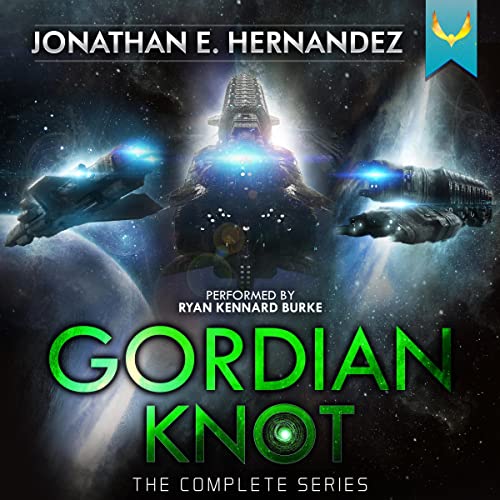 By: Jonathan Hernandez
Narrated by: Ryan Burke
Try for £0.00

Get the Gordian Knot bundle, featuring all three books and hours of aliens, war, and explosive military sci-fi action perfect for fans of Rick Partlow, Jay Allan, and David Weber.

Two civilizations clash. A rebellion grows. The fate of the galaxy hangs in the balance.

Technical Chief "Pappy" Gunther is a grizzled, burning-out commando in the United Earth Armed Forces. He ponders a return to civilian life, yet feels a strong sense of belonging to his elite team. When colonists on a far-flung world request aid, a task force from several allied systems is assembled. Pappy and his crack unit are sent to investigate and to engage a mysterious alien force from beyond.

Talks-to-His-Spear is the warrior-caste champion of a matriarchal space empire called the Regime. Leading an army of fanatical, genetically enhanced super-soldiers, he dreams of dying in battle for the glory of his queen. However, he’s beginning to question the motives of this new campaign and fears that he may have to compromise his own deep sense of honor in order to fulfill his tasks.

Nobody expected the two alien cultures to have so much in common and for friendships and alliances to form alongside rivalries. However, when Pappy discovers a rebellion spanning worlds, everything changes. The growing insurrection threatens to tear the Regime—and the galaxy—apart.

What listeners say about Gordian Knot: The Complete Series

This convoluted story needs much better character development and an interesting plot instead of only a BANG BANG repetitive plot.

It's like listening to an annoying drum for 45 hours and having no clear story to tell. However, this audiobook may be better suited as a form of military waterboarding, haha.

Good story. End of the final book does drag on a bit long but it’s wrapping up stories from 40+ hours of listening

l have enjoyed listening to this book, getting all four of the books in a bundle was great. We follow a old grisly marine who is at a turning point of his career. Does he quit and take retirement. But its appears that fate has other plans for him and his team.