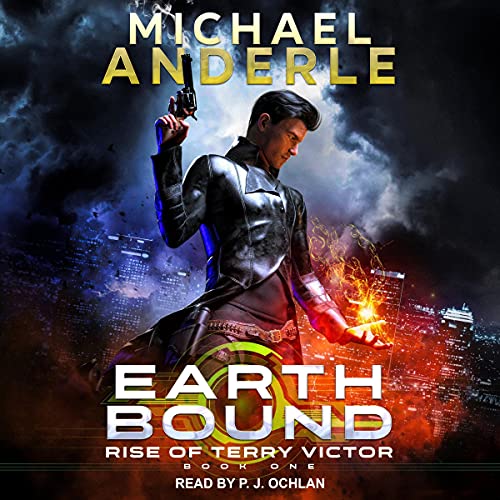 It's one stranded ex-lawman against a world full of homicidal psychopaths. Psychopaths who might, or might not, be human.

Intergalactic lawman Terry Victor is betrayed by fellow officers and sent to a backwater planet on the interstellar arm of the universe. In short, he was sent to the planet called Earth. Fed up, he quits in a fit of disgust and seeks a peaceful retirement among the humans.

Unfortunately, trouble has a way of finding Terry Victor. Keep his head down and away from Earth's authorities, or help a woman about to be attacked by a gang?

Can Terry Victor resist the siren call that could ruin his future on this planet?

Is he willing to give up his forced retirement to take on Earth's troubles?

Finally, what happens when a string of deaths points to something even he fears?

Will Terry Victor survive? If he survives, will the authorities realize there is an alien living among them?

What listeners say about Earth Bound

The story is entertaining but slow

I liked the story, but it was slow. I hope the next one will be better.

Really good also after chapter 10 you shouldn't eat while listening to this it get pretty gory. Can't wait for the next one

Great beginning for a new series..

I've read a LOT of Michael Anderle's books and they are such good sci-fi and paranormal books and it's always so funny when someone leaves a review with 1 or 2 stars and says the book is not believable. LMAO! Why would either of these kinds of books be believable?

This was good because an alien, Terry Victor, was trapped on earth, by some bad guys, and he found another alien on earth that was a carnivore and had killed thousands of people since he'd been here for centuries. This was a good story, since he made 2 very good friends who didn't even care that he was from another planet, or bled green. Angelina and Charley were great characters.

No romance and the F-bomb was used 47 times.

As for the narration: P.J. Ochlan did a fantastic job on the voices as well as the emotions when he read. I would definitely listen to him again. Which I hope to when the rest of this series is out on audible.