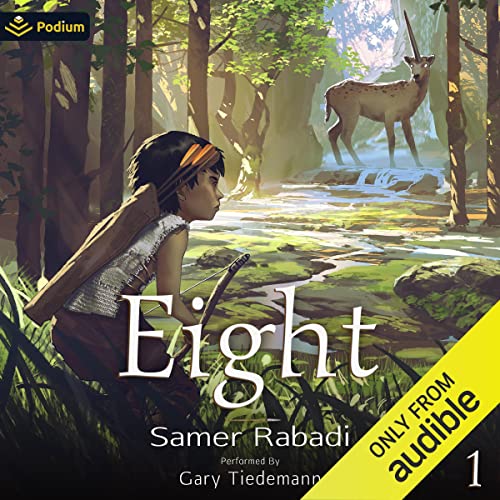 By: Samer Rabadi
Narrated by: Gary Tiedemann
Try for £0.00

Life’s tough when you’re trapped in an eight-year-old body on another world.

His name is Eight. Not really, but that’s what the System decided after a slip of the tongue. One moment, he was stepping out the office door on the way home, and the next waking up on a hillside below a town wall. Oh, and the gate guard drove him off, because he thought Eight was a monster.

What’s a boy to do in a world full of magic and so many, many hungry creatures searching for their next meal? Well, there’s an old man inside that body, and he'll use everything he’s learned in his sixty-four years to survive. Starting a fire? Sure. Crafting a spear? Check. Defending the cave he calls home? Also check, a big one.

There are allies too, but not the kind you’d expect.

Eight is a LitRPG novel of magical survival—of discovery, bushcraft, and creatures weird and wonderful. A hit on Royal Road–with millions of views–and now it’s available on Audible (narrated by the estimable Gary Tiedemann).

What listeners say about Eight

One of the good ones

This is one of the good ones. I am glad i started reading thos after book 2 was out, because it was over way to fast

fantastic story great writing draws you into the adventures of eight and his friends, just need the next book in audio as it was a fantastic listen as well.

Pros: well written, unusual.
Cons: slow progression, unusual names (as a not native speaker they all sounds the same), parasites

Gonna buy the next ones as well.

refreshingly different perspective for the genre

loved it, great story, great performance. a nice new approach, mix of litrpg & survival not full of monotonous repetition of game stats as many others in this genre, just enough to show evolution & development

I love all the book and narration. I am looking forward to the next one.

Good start looking forward to next one

Tbh the reason I have this a go was the royal roads tag I’ll given anything that did well there a go. I was surprised I really liked it although now I want more :(

This is a good first attempt but

The book is overtly complicated, I would say to the author that you don’t have to try so hard that you can write. Story is a good one, but just needlessly complicated and it’s just a hard listen even at 1.6 times the speed

3 reasons why you should give this a chance.

1. Great narration.
2. Likeable character, with a older perspective with a young body. A common theme but best I have seen.
3. Good value over 12 hours.

The writing and narration is incredible

I gotta say I really enjoyed this book. The flashbacks are a little rough emotionally. The author captures the pain and sadness of a life well lived eloquently. The characters are interesting and have their own experiences as well. The two perspectives at the end; magnificent. Overall, well written, masterfully narrated and highly recommended.

I may have just found my new favorite series. Eight was the adventure I didn’t know I was looking for. Interesting concepts and world building. The first few chapters the protagonist is very introspective but as the story progresses you see him fully commit to his new world! I can’t wait for the next book. Great narration and story telling!!

good balance of power and trials. good start in small area of the world. looking forward to seeing eight in the wider world.

I really enjoyed this audiobook. I was skeptical but it only took 10 minutes and I was hooked. Really looking forward to the next book.

Having, nothing but praise

Delightful, very well read.
Story was focused and we'll prepared and delivered. A plus

The story is decent but far to much sentimentality and looking into the past for me.
Though the story is about an old man so maybe it is true to the character.

Okay so i did enjoyed this but I'm a little biased because of the mixed heritage of the MC and yes i also love pozole but i have to say that some chapters i found really boring and i actually skipped most of 2 chapters and didn't ended up missing anything also the otter is so freaking cute especially when she shows up wearing sunglasses and a tourist shirt. would be definitely picking up book 2

Some litRPG books are way too stat heavy.(Neven Iliev) This isn't one of those. This has more of a Dakota Krout and his Divine Dungeon series feel to it. If I am right there is even a nod to that series in this book(, your job find it!) I really like the how magic is accomplished in this book. Some of the monsters are rather interesting and I haven't seen before. I like new monsters.

This isn't a real fast paced book but it is deep in areas. The man did live a life before getting changed into an 8 yr old boy on another planet. It is a good STORY. If you are looking for all action though, this isn't the story for you. I thought it moved fast enough to not be boring.

The narrator did a good job of telling this story and I am likely to check out other works of his.

The story was a great story. I really enjoyed the soft tones of the narrator.

An old man in a child's body stuck in a hostile new world. It is quite the concept and I felt that the author did a great job in telling the story.