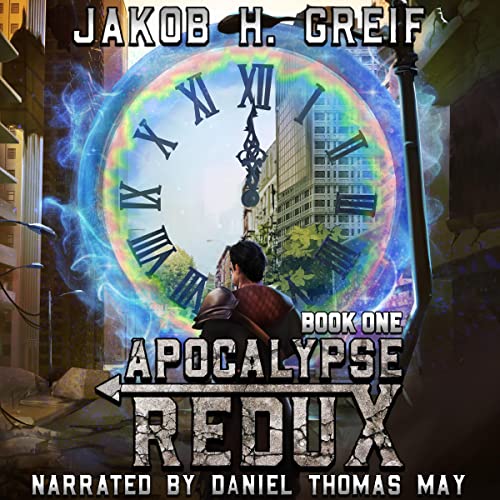 The worst thing about the end of the world is we did it to ourselves.

Isaac Thoma lived to see the last handful of survivors defeat the demonic champion. He is now alone, his past in ashes, the last and most powerful human on a blighted Earth. But what if he could go back?

Hurled back in time, Isaac has one chance to change it all. A chance to warn humanity of their impending doom. A chance to stop the [System] before shortsightedness and lust for power can render humanity extinct. Facing malign deities, demonic hordes, and the unstoppable march of human greed, Isaac will give his all to prevent the end that has already happened on the day the world became quantified.

Apocalypse Redux is a pre-apocalyptic LitRPG by Jakob H. Greif (a.k.a. Wilderfast). A rationalist approach to fighting the end of the world amidst mind-bending adventures and battles against infernal forces, Apocalypse Redux is the series that took RoyalRoad by storm. Buy it now to see if humanity’s fate can be changed. To see if one man with a second chance at life can rise up and make a difference.

What listeners say about Apocalypse Redux, Book One

Good start with a few hiccups

A few to many stat screen repeats were almost nothing has changed. Also some incongruity with the numbers and the explanation or rather lack there of.

I expected the usual copy cat trash but nope, this one is original, with a competent MC (even though I vehemently dislike a lot of his ideas - at least he has any, and he's consistent and does not rely on plot armor)

narration was good, as expected from Daniel Thomas May.

a big surprise overall. and it doesn't play in New York or one of those stereotypical locations.

a book does not need a fresh take on litrpg to be good. but it's a good sign if there are new ideas. and there are plenty in this one.

the things I dislike are basically just how the author sees the world and how he thinks things work in real life. mind you, 99% of authors are that dense (state apparatus is competent and trustworthy - what is this? 1970s lol??)

A piece of coal turned into a diamond!

When I first started reading this book, I was underwhelmed buy the whole story. It was so much like all of the other stories. I’ve read like this, the premise, the layout everything, but boy did it turn out different. This is an excellent example of how someone looking through a slightly different lens can change things and actually generate improvements on the standard story. I look forward to seeing how this story will progress in the next sets of books.

I was surprised how much I loved this.

I've listen to quite a few stories that feature going back in time to stop at apocalypse. However, this one hits a somewhat differently.

It comes across as pretty much a slice of life, well still having that power fantasy of getting stronger.

He has all the tips and tricks from the future so we knows how to grow, but it's also not completely relying on that.

Instead of the normal route of becoming obscenely powerful and doing everything yourself, he acts on a plan that pushes knowledge of the dangers out to as many people as possible.

I also like how it's reflection of human nature.

Giving humans the tools to become pretty much demigods, while trapping the very means that system uses to impower them.

It was an ingenious way to doom humanity.

as the title states this is a great start to a new series. fans of redu type story will find a great book, system is different from I'm use to see which set it aside and make me look forward to seeing how it will develop

To much of the book is errands. The author argues about their importance and then proceeds to spend an insane amount of time having the MC helping run tests and errands. The MC sabotages himself in more then one way (such as build and progress) to “help the world”. Who wants a logistically realistic litrpg? Have a character who can make all of this a non issue if you need to meantion so much of it. It’s an option instead of this excuse for annoying filler.

Starts off well but then he starts doing boring lab work. Not cool dungeon stuff or grinding. Literal lab work necessary for the future? Why would I want to hear the LAB WORK necessary for the system apocalypse. So he gets that as a job. Then to a frat party where more lab work somehow comes up. His boss then gives him a day off do you know, do all the cool stuff that would make him stronger and such. He fights to get back to his lab work. He then just takes his time doing boring errands that I guess are important but should have been just skimmed through. The filler is pointlessly ridiculous.

This is a new take on an established genre. One that I think is much more realistic and intriguing. The MC is likable and has an actual plan to get things done that doesn’t just boil down to get as strong as possible and hope to beat anyone who steps up.

New take on the system apocalypse rewind premise and it was awesome. well worth the credit or cash

Very fun book, well written with an interesting main character. The author has clearly never been to Vegas.

it's a solid story. I enjoyed it. has a few pacing issues and what not but it's still good. worth your time. I plan to continue the story.

Not what I expected Not the worse either solid 4

SOOO, let me start by saying that this was not the worse, but not the best Lit RPG I have listened to recently. Let’s starts with overall grade, it could’ve been better, but too many faults from the MC.
Firstly, I did like that the MC wasn’t a complete dummy as the other ones who always go back in time and seem to forget everything. I think this guy did needed to do a lot more summoning on his own and a lot less relaxing. I get that he wants to help the world, but as it is written the world listens to the strongest people who know the most about the system, so why not be so powerful that he can’t be questioned.
Secondly, this guy has the problem of wanting to know if he is doing the right thing and should’ve done back in time since he is erasing the friends he had. I’m like, literally 3 people all men were left in the future, so what friends. Seriously, that was a nonsense part of the book.
Thirdly, I don’t get why the MC didn’t want to get a few more aspects and slots before he leveled up. He could’ve easily gotten 5 of them before level 10 because his rushing didn’t do anything that made it so he couldn’t get 5 from what I saw. He just needed to spend less time hanging out and more time grinding. This is the literal one thing that will save humanity, but he is playing around.
Fourthly, I don’t get why he wants to tell anyone about the future. Seriously that just madness, he needs to keep what he knows close to himself and himself alone. So many people will want too much information and so much is constantly changing, so his outcome is already different, so he needs to forget about telling anyone.
Finally, I think this can be a great book and series if the MC starts grinding and pushing hard to get more aspects, so his class is even more powerful. He needs a vampiric drain skill or more passive regen that doesn’t need mana. This dude is a bit too weak for me, because currently he could be killed with a bullet. And he isn’t working to fix it quickly.