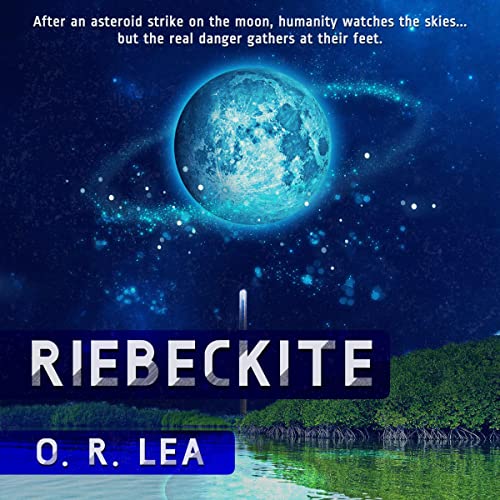 An asteroid strike on the moon has left it with a ring of deadly spores that are drifting down to Earth.

Growing up under that moon, Tahira promised her childhood friend, Zareen, that tackling the crisis would overcome the national divisions that separated them. Tahira is now a biologist for a corporation constructing experimental towers, which force the spores, known as "riebeckites", to germinate into harmless colonies. Rumors of riebeckite colonies taking sinister flesh-eating forms among the ghettoized Iranian communities are dismissed as propaganda invented by those opposed to Azeri occupation.

But when Tahira makes a discovery linking these stories to the Skyscrubber towers, her findings are inexplicably suppressed, and she is framed as a terrorist. In a race for her freedom and her life, Tahira has only one person she can rely on: Zareen, now an Iranian freedom fighter. Together they must escape Azeri police and Iranian militants, and survive the horrifying next stage of the riebeckites’ development. Only if they expose the truth can the world unite against a danger which has been gathering at its feet while everyone was watching the sky.

Riebeckite combines suspense and conspiracy with heart-in-mouth action sequences and nightmarish encounters, all in an immersive near-future setting, and, at its core, is a heartwarming story of friendship against the odds.

What listeners say about Riebeckite

Full of character and tension

I wasn't prepared for how good this audiobook would be. It's a great book, narrated in such a way as to make the characters' personalities shine. I'm a very picky listener, especially when it comes to accent (sorry), but I loved the narration here.

The core strength of the story is in the relationship between two women, I think, and it's a complex, cute and rewarding one. I mean, all the characters' interactions were pretty cool and I loved all of our 'good' cast. There was a lot of humour scattered throughout as well.

Up next is the science, and the main plot, and I found that a fascinating thread throughout. It was far better than I expected going in (not because I had low expectations, but because I'd skimmed the blurb and forgotten about it prior to listening). It's sort of like an Earth-bound Project Hail Mary with seemingly lower stakes and more originality to the characters. The build-up is intriguing and the action is intense. I absolutely recommend it if you're out for a good listen/read.

A great story idea, well executed, very well written and narrated, everyone should read this.

Amazing and would recommend!

it has been a while since I have sunk my teeth into something exciting and this was definitely exciting!

They author had no trouble conveying his vision and imagination.

This book had me invested in multiple aspects and I'm greatly looking forward to the sequel, which I also hope is narrated by Natalie Hammond, who managed convincing accents and emotions!

Amazing and would recommend!

"Every tree casts a shadow on it's own roots..."

Two young friends separated by political division when only eight years old, only one, Tahira, living a life of relative luxury and security. But she never forgot Zareen. decades later, Tahira has become a biologist, working for the As more like her father before her, researching marine life and the effects on the earth's waters of the blue particles which shower down from the moon after it had been struck by an asteroid. If breathed in, these particles can make people very sick, but little is known about the effects in the sea. Third intends to find out.

This is an unusual premise for a science fiction story, especially as it combines with the ever present tales of political tensions. Set in the near future, it highlights the stresses between the have and the rejected whose only crime is to be born the wrong nationality. But it is not a heavy book: the story races through unexpected action, creating vivid pictures in the mind. The charactets, too, are well presented, very different but both with the same intense core. Certainly worth reading.

Narration is by Nathalie Hammond, whose soft, mid timbre tone is at first a surprising choice. Plus her reading is slow. But with a slightly speeded up playback, she is superb, being totally absorbed into the story and it's protagonists. She fills her presentation with just the right level of emotion, fusing brilliantly with the written word and keeping the reader constantly involved. A fine overall performance.

I was fortunate in being able to freely download it complimentary copy, at my request, via Free Audiobook Codes. My thanks to the rights holder. Unusual, relevant, well crafted science fiction and the first, presumably, in a new series. Recommended.

I struggled to get into this from the beginning. I found it difficult to read a book on war while real war is playing out in the news daily. The riebeckite creatures felt like an after thought, sprinkled into a book on warring nations. The characters were flat and unrealistically naive. The main character got hurt early in the book and then supernaturally walks around like she is fine for kilometers.

And Natalie Hammond is bringing everything to live :)

I could not put Riebeckite down and enjoyed every single page of it. This fast-paced SciFi book with Thriller elements is set in the middle-east in the not too distant future. The moon has been hit by an asteroid and now small alien particles are gathering on earth. If they are blue, they are mostly harmless, but don’t let them get in contact with a prime! They turn into a cluster of hungry Riebeckites that eat through your flesh and bone in seconds. If that’s not bad enough, Tahira, our main character, stumbles into a wide-reaching conspiracy involving the aliens that could change life as we know it.

This book is full of unique ideas and enjoyable characters. The plot doesn’t slow down and you can only keep reading because you need to know what happens next. I can’t wait to continue with the series and figure out how Tahira, Zareen, and the others will get out of this mess…

I read the physical book first and listened to the audio later on. I’m loving the narration (and I’m not a huge audiobook person). Natalie adds such a great atmosphere to the story.

So after seeing rave reviews on Instagram, I had to read this book. In the near future, an object hit the moon and blue particles having been coming down to Earth ever since. But there’s more to these particles than it seems, and one scientist is determined to find out the truth.

This self-published book grabbed me right away! It set a good pace and kept it up until the end. The riebeckites are unique and interesting, and the characters are engaging. I really liked the main character and her best friend. It was an enjoyable read. I can’t wait for the sequel!