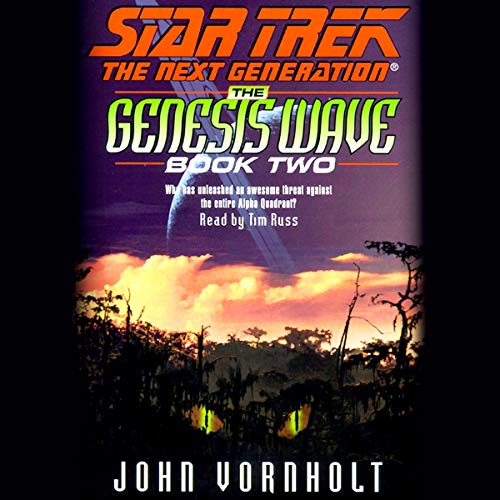 Star Trek, The Next Generation: The Genesis Wave, Book 2 (Adapted)

The spectacular conclusion to the thrilling double-sized adventure!

Like an unstoppable cosmic storm, the dreaded Genesis Wave continues to sweep across the Alpha Quadrant, transforming entire planets on a molecular level and threatening entire civilizations with extinction. Based on the long-hidden scientific secrets of Dr. Carol Marcus, who has mysteriously disappeared, the wave of mutagenic protomatter seems to have come from nowhere, posing a cataclysmic menace to life as we know it.

To combat the rushing terror of the wave, Captain Jean-Luc Picard and the crew of the Starship Enterprise have been forced into an uneasy alliance with both the Klingons and the Romulan Empire, both of whom may crave the forbidden secrets of the Genesis technology for themselves. The finest engineers of three civilizations, including Geordi La Forge and his long-lost love, Dr. Leah Brahms, must race against time to devise some way of halting the deadly wave before yet another world is transformed into something entirely alien and unrecognizable.

But even if, against all odds, the Genesis Wave can be defeated, Picard and his potentially treacherous allies must still confront the greater mystery of what unknown intelligence dared to launch the wave against an unsuspecting galaxy - and for what malevolent purpose...

What listeners say about Star Trek, The Next Generation: The Genesis Wave, Book 2 (Adapted)

I would thoroughly recommend this book and the others in the series...

Great for any Trekkie or Trekker

Good story, excellent narrator (he's the actor who played Tuvok in Voyager), good performance from all other voice actors and great traditional Star Trek sound effects to bring it all to life. Would highly recommend - can't wait to start listening to the conclusion!!!!

One of the best Trek Books


Excellent! This, and the Kann story, are the two best audio books on Star Trek.
Get book 1 and 2. Book 3, however, is your choice.
Having only a superficial relation to the first two books, it still tells a good story. It
seems like it was made a "Part 3" because it would have been difficult to sell otherwise.
It's basically the Ringo Star of the band. Get Book 3, if you have to have the complete set, but
the second book wraps up everything it needed to wrap up.

Only Trekkies need apply. First, you'll need books 1 and 2 to complete the story, so keep that in mind. All the Next Generation characters get together for this sequel to the Genesis Wave story. It is fairly fast paced, but also superficial, with more emphasis on sound fx than on any real substance. There is some action and all the characters stay true to form from their TNG legacies. Die hards may enjoy this, but this was more like listening to the TV show, than reading a new novel.

This is a great follow up & sequel to Star Trek II & III in the Next Generation timeline. Action, mystery, suspense, & wonderful characters. Tim Russ does a great job of narration.

Would you try another book from John Vornholt and/or TIm Russ?

I have a few

Would you ever listen to anything by John Vornholt again?

What aspect of TIm Russ’s performance would you have changed?

I've heard him before. He's one of the better readers, And does a good Picard.

I only got half

What a great book, great emotional moments. So much better than modern Star Trek books

the book isn't that bad. It's like any basic Star Trek book with a few Klingons, The Genesis Project, and a few of your favorite characters. I would suggest both parts of This Book for a bit of light and fun listening.

Two short story books for the price of 2 books. Plot was dimple and short. A disappointment

A worthy end to an interesting series.

Short, but, well done. I'll check out more Star Trek audio when I can. Maltz's death almost made me cry.

A must read for all Trekkies.

Tim Russ was excellent as narrator. This series is my first Star Trek Audio book series. I hope they will all be at least half as good.