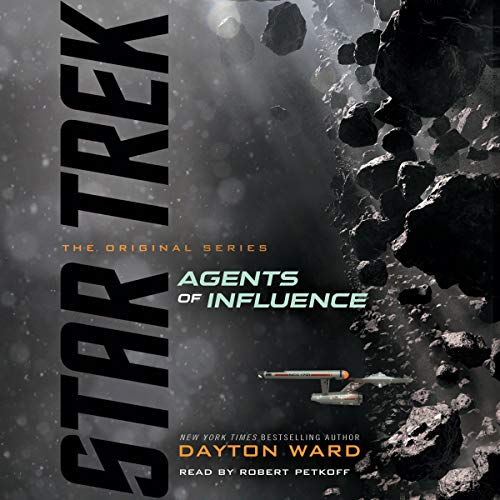 By: Dayton Ward
Narrated by: Robert Petkoff
Try for £0.00

For years, Starfleet Intelligence agents have carried out undercover assignments deep within the Klingon Empire. Surgically altered and rigorously trained in Klingon culture, they operate in plain sight and without any direct support, while collecting information and infiltrating the highest levels of imperial power. Their actions have given Starfleet valuable insight into the inner workings of Klingon government and its relentless military apparatus.

After three of Starfleet’s longest serving agents fear exposure, they initiate emergency extraction procedures. Their planned rendezvous with the USS Endeavour goes awry, threatening to reveal their activities and the damaging intelligence they’ve collected during their mission. Tasked by Starfleet to salvage the botched rescue attempt, Captain James T. Kirk and the crew of the USS Enterprise must discover the truth behind a secret weapons experiment while avoiding an interstellar incident with the potential to ignite a new war between the Federation and one of its oldest adversaries.

What listeners say about Agents of Influence

I'm a massive star trek fan but this novel was lacking in everything. Struggled to get to the end.

Agents of Influence is a classic

I came into Agents with an open mind, but by God it blew the doors off the barn and kept on going. It has a hint of TOS episode "The Balance of Terror" and I think this might be one of my favourite books from the last few years. The pacing is great, the characters are bang on and it's a really fantastic story.

this book had so much potential to be great

Sadly the story was so insipid it was a pain to listen too. the book was read without drama and at such a pace my mind mostly wondered away from the plot.

was enjoying it, then

Hello once again to my readers and fellow audio aficionados! With apologies to Sgathiach I feel compelled to talk about Star Trek and thankfully there is quite the collection of audio versions of Star Trek novels to discuss! Personally I’m not a massive Trek fan but I certainly enjoy Trek and consider myself a casual Trekkie with The Next Generation and Deep Space Nine being my personal favourite series.

Agents of Influence is a TOS era novel written by Dayton Ward a man with quite the history when it comes to Star Trek spin off media. Ward has written – either solo or as a joint effort with frequent writing partner Kevin Dilmore – more than 30 Star Trek novels and stories across the last twenty years with Agents of Influence being his most recent. He has also twice won the Scribe award from the International Association of Media Tie-In Writers which spreads across all licensed media and is considered quite the achievement in the field. According to interviews with Ward, he also acts as a consultant for CBS and Paramount who own Star Trek when it comes to spin off media assisting among others Simon and Schuster and the comic publishers IDW Publishing.

The plot of Agents of Influence is as follows: For years Starfleet Intelligence has had undercover operatives deep within the heart of the Klingon Empire. These operatives have been surgically altered and trained to look, think and act like a Klingon to assist in gathering information. When three of these agents fear exposure they execute last resort extraction procedures. Their recovery goes awry so Captain James T. Kirk of the USS Enterprise and his crew must find out what they can while attempting to avoid an intergalactic incident that could reignite the war between The Federation and The Klingons.

This novel is just straightforward fun from start to finish! Having Kirk, Uhura, Spock and the rest of the Enterprise crew caught up in an intrigue of spies alongside the crew of the USS Endeavour and various interested parties was a listen that flew by. The characters we all know and love are most definitely on fine form with their inner voices being perfectly captured by Mr Ward. It’s clear he’s been writing these characters for twenty years! This really feels like Star Trek!

On top of that the book original characters – be they new to this novel or carry overs from previous Star Trek novels – also seem very true to the TOS Era. With particular mention to Captain Khatami and Lieutenant Commander Yataro of the Endeavour and the main leader of the undercover agents Morgan Binnix all of whom acquit themselves wonderfully and you grow more and more fond of them throughout the piece. Technically this novel takes place in the final year of the ‘Five Year Mission’ and is a follow on from some previous novels by Ward but you don’t need that information to enjoy it as – aside from a few mentions of previous encounters between the crew of the Enterprise and Endeavour in vague terms – it doesn’t really have an impact on the plot. I also have to commend Mr Ward for writing some rather entertaining Klingons and some very fun banter throughout! It might not be on the same level as The Trouble With Tribbles, The City On The Edge Of Forever or The Conscience Of The King but it is very entertaining Star Trek and sweeps you up in the adventure!

When it comes to the audio edition things are also firing on all cylinders. The narrator is a Robert Petkoff who has narrated the vast majority of Star Trek audiobooks in recent memory. His narration is certainly enjoyable, being able to convey the personality of the characters while also making clear the threat of the situation. I particularly enjoy his Klingons – he certainly knows how to speak the language (avoiding the anger of Trekkies world wide probably) – as well as Chekov, Sulu and Scotty. His accents for these characters are very broad in most cases but he’s clearly having a lot of fun. I half keep expecting Chekov to mention ‘nuclear wessles’!

On the other hand when things get serious you feel yourself getting caught up. Be it internal tensions and distrust within both the Federation and the Klingons or a traditional Star Trek action scene with lots of phasers firing and the odd bit of unusual tactics I certainly enjoyed Petkoff’s narration. I did happen to notice a Deep Space Nine audiobook focused on one of my favourite characters with Mr Petkoff’s narration so I may well be listening to him again in the not too distant future!

In conclusion this really was a lot of fun. It might not be as thought provoking as previous Star Trek adventures but it definitely felt like a classic adventure for Kirk, Spock and the others and I couldn’t help but smile through a lot of it. I hope I can persuade some of my readers to give this a listen or a read, return to the original ‘Five Year Mission’ and join me in finding out about the Agents of Influence!

another stellar read by Robert petkoff

I seek this narrator out, as he brings the characters to life so well. its trek, so I love it - but every audio book I've listened to by him or January levoy has been that much better. The story was good, but let's face it, Robert is the center peice here, tng or tos he nails the characters.

for the book, there was enough intrigue, and the story line for me flowed, I didn't feel it was slow at any point, liked how it played out with reference to the higher powers (no spoilers from previous books). it set the tension right.

Excellent story read by Robert Petkoff who made the audio for me. His brilliant interpretation of the crew turned it into great listening.

Dayton Ward novels seem to all be long slogs. I'm not sure what makes Greg Cox so good at this and Dayton Ward so laboured. I just finished A Contest of Principals by Greg Cox and I'm shocked to see Cox's book was longer. It seemed to take half the time Agents of Influence took.

Starts strong. Very exciting 'set pieces'. Lags a little in the middle. But worth reading.

Star Trek fans should listen to this book.

Robert Petkoff is an outstanding narrator here. Dayton Ward is an amazing author here. Buy this one.

Glad I Found This.

I enjoyed the Hell out of this book. It is rare for a work of fiction to cause me to want to delve into the world. This book kept me sane during long work shifts and led to a watch/rewatch of Star Trek television series. In my opinion, it’s worth it for anyone even tangentially interested in Star .

TOS stories are always a sentimental journey for me. coupled with Petkoff's narration you can't help but enjoy yourself. Highly recommend!

What a great story. It is filled with Spies, the Endeavor, Enterprise and a really unique twist.
Dayton Ward has done it again and Robert Petkoff has always has done an amazing job with the voice over work.

Good story. Robert Petkoff is amazing as always. He does an amazing job of keeping the characters interesting.

I enjoyed every minute of this book! The story and the performance of it were superb.

Petkoff is his reliable self with a great narration. The book itself had some great concepts and sequences but overall I found my mind wandering far too many times... still worth a read for Trek fans

Acting was great and the story was like a classic episode. dialogue between the characters was realistic and there was good dramatic tension. A chance to better know Admiral Nogura too.

A very detailed Star Trek story, giving readers and listeners alike a solid, exhaustive look at another Starship, the USS Endeavor. A good, military look, as well - Enjoyed by this Retired US Army Veteran! A good look at the legendary crew of the USS Enterprise as well, focusing on all 7 primaries, with some surprises as well! Well worth a Trek fan's time! B+ - A, for effort, and result.