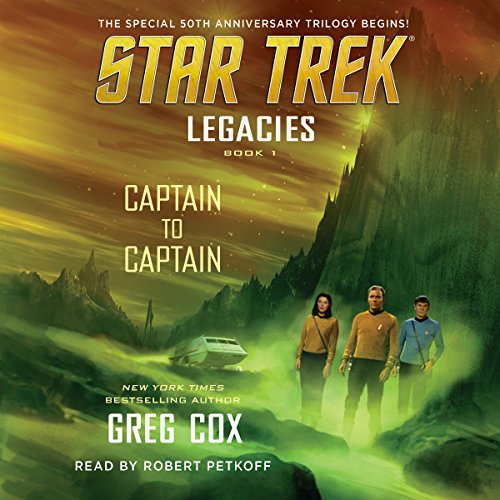 By: Greg Cox
Narrated by: Robert Petkoff
Try for £0.00

An epic new trilogy begins - a tie-in for the milestone 50th anniversary ofStar Trek: The Original Series - that stretches from the earliest voyages of the starship Enterprise to Captain Kirk's historic five-year mission and from one universe to another!

Hidden aboard the USS Enterprise is a secret that has been passed from captain to captain, from Robert April to Christopher Pike to James T. Kirk. Now the return of the enigmatic woman once known as Number One has brought that secret to light, and Kirk and his crew must risk everything to finish a mission that began with April so many years ago.

Nearly two decades earlier, April and his crew first visited the planet Usilde, where they found both tragedy and a thorny moral dilemma. Today the legacy of that fateful occasion will compel Kirk to embark on a risky voyage back to that forbidden world - which is now deep in territory claimed by the Klingon Empire!

What listeners say about Captain to Captain

This is good Trek. Can't fault it. Great narration.

Really enjoyed this audiobook - author really captured the spirit of Original Star Trek and created a great new story with these familiar characters... what a great way to celebrate Star Trek's 50th birthday! Loved it.

And as far as audiobook performance goes JUST WOW- a great narrator, captures the spirit of all the series actors/characters etc and tells the story in a way that it never gets boring, never sounds dull... even during quieter scenes. Cannot wait for books 2 and 3.... the continuation of the story and with the same narrator!

(And I'm really hoping we can see more new Trek books up in audio.... & preferably with this narrator please!! literally got me to buy extra audible credits on top of my stipend because I couldn't wait!)

Such a great story. Certainly one of the best trek books I've read in a long time.

What did you like most about Captain to Captain?

Great to have another Star Trek audio book though when will they get round to destiny and other books which currently available in German ?!?!?

Has issues but really liked it

I love the grandeur and feeling of the story which fit into the TOS Era. I feel the writer tried too hard in some places, making too many small references to Original episodes that have nothing to do with the story. One does pay off but the others are neccicary. The Main character is Number One (Una) ,who, even though we only saw her in one episode of the TV show, doesn't feel like her. I like the character, but it didn't feel like the woman we saw. Because so much of the story is from her perspective with Kirk and Co. being a supporting cast don't understand why a male narrator was chosen. He didn't do a bad job but I thought he was inappropriate. Even with these negative issues I enjoyed it and will be getting the rest of the series soon,.

full of awful clichés, unoriginal and boring. Nothing new or interesting here. The abridged old stuff is far superior.

for all trekkie lovers....

loved it... great storyline... true to Gene Roddenberry genes and genre... a treat for all trekkies....

Good but no Brick.

Enjoyed the story and the performance. Excellent detail. Scott Brick narrating would have nailed it.

as always Robert petkoff is amazing. recommend this to any trekkie. Greg Cox paints an awesome new story with the original series cast

superb as usual .Can't wait to start the next leg of this book. thank you

I'M A DOCTOR, I KNOW HOW TO KEEP A SECRET

MORE TRIAL, LESS ERROR, PLEASE
I agree with another reviewer, that this is easy listening. It is not overly complicated and is a little predictable in parts, but some twists, that I did not see coming. Star Trek fans will enjoy this most. I love the banter between Spock, Bones, and Kirk. In parts it was COl, Chuckle Out Loud. The Aliens are pretty cool, or should I say slippery.

I'LL MOURN LATER
I did have some problems with Uno, who was a main character. She is suppose to be the ultimate captain, but I found her to be making lots stupid decisions. She kind of cost the lives of nine officers and almost the Enterprise, as a young officer and The Federation, let her off the hook and to become a captain? I did not find her a logical captain.

DO NOT BE FOOLED BY IT'S SIZE
This is a full story in it's self, but it does lead to another episode and I will be buying that.

narrator
I thought he was pretty good. He does a good Kirk, Spock, Chekov and Scotty. His Sulu, Uhura and Computer voices are not so good, though.

Welcome back to audio Star Trek

It's been too long.....it's just been too damn long! What a way to bring back Star Trek to audio. I hope this trilogy isn't the last either.

Captain to Captain has everything you could imagine from the original series. From going back to Captain April to Pike and to Kirk, a secret aboard the Enterprise is passed between Captains each time to keys to the ship are handed over.

When this secret item is stolen in order to complete a mission from years gone by, Kirk and crew are challenged to pursue to either stop, or help, the enigmatic woman known as Number One.

What really brought this book home for me was the fact that the central characters were actually NOT the stars of the Original series, but those of the quest that took place years ago. Sure they play an integral part of the story, but Kirks crew take a back seat for much of the book. You get a well done Star Trek story without the main cast.

Then there is Robert Petkoff.....I could hear each character come out in his voice. Kirk, Spock, Bones, Scotty, Sulu, Checkov, and even Uhura. I swear I was listening to an episode at times. Supremely well done, and well acted.

The ending will absolutely leave you wanting to jump into the next book right away.....speaking of which....time to put the headphones in and continue the story in book 2.

I would highly recommend this book to any Star Trek fan. The author, Greg Cox, appears to be steeped in the lore of the series. He is able to handily integrate it throughout the narrative while not becoming bogged down in it.

The characters representations and thought process were well flushed out and consistent throughout the story. Greg Cox seems to not only understand the world of Star Trek, but also has an understanding for the way that a Starfleet officer would think through a situation. I particularly enjoyed, listening to the internal monologues. Well I will admit that the story itself was somewhat derivative, it was still thoroughly enjoyable and I was easily sucked into another awesome adventure.

It's been too long

After so long without Star Trek Audiobooks I was thrilled that for the 50th anniversary they were giving us three. The book was good, and characterized both Kirk and Spock well, the rest of the regular crew are sadly background in this book. That being said it doesn't detract from the story.

My only wish is that they'd had sound effects, specifically the slightly "off brand" ones Simon and Schuster used to use instead of the official ones, I remember lots of time as a kid/teenager listening to those and I missed them here.

Too painful too bear

Really enjoyed this book. The story covers a mission of the Enterprise
Under the command of Robert April. The story expands some ideas from certain classic episodes of the series. This was a good kick off to the legacy trilogy

This story takes me back to when I was a kid watching the original Star Trek series. It's very well written, the narrator is spot on and the story follows canon. Highly recommended if you are a fan of Star Trek.

I felt sorry for the narrator

"Starfleet's Finest" seems to have a new definition. Apparently they can be easily captured by primitives, have no idea how to scan for life signs, think that landing a starship with blazing landing lights is a stealth landing, and cannot use a communicator while trying to outrun giant slugs.

I bought this book because I love Star Trek and Robert Petkoff's narration. His voice will always be the voice of Travis McGee to me. Mr. Petkoff did not disappoint me, but everything else about this book did.

This is a good start on two fronts:
- As the beginning of a trilogy
- As the first Trek audiobook in years!

Pros:
I'm always happy to see Number One return, and this is very much *her* story! Greg Cox delivers on portraying her POV, as well as building on characters that long-time Trek readers may recognise. There's a loving treatment of TOS imagery, combined with scenes the series couldn't have pulled off.


Robert Petkoff did very well narrating. I could always tell who was speaking, including the original characters.

Some of the dialogue can be wordy and unsubtle. For example, Spock *can* be long-winded, but he can also pack a lot into a single-word reply. Here, he comes off as wooden.

Number One's voice is higher than how I remember Majel Barret playing her. (The computer voice is spot on though!)

Scotty sounds more like Simon Pegg than James Doohan. I suspect that Petkoff's Scottish accent us more authentic than Doohan's but it was jarring.

I question the choice of using "s/he" as a personal pronoun. It is perhaps the least-used gender-neural option in real life. On the other hand, I applaud the acknowledgement that "he" and "she" are not always appropriate.

Once Cox chose a pronoun though, I wish that Petkoff had spent more time acclimating himself to it. People have a tendency to put emphasis an unfamiliar pronoun. I know first-hand that this is difficult to shake. However, this could've been an opportunity to demonstrate "s/he" and "hir" being used naturally.

Imaginative story quickly succumbs to contrived dramatic plot turns and "wtf?" twists. You're at warp and a shuttle leaves your ship. It takes off at warp (FTL) too and...you still have "visual"..? Far too many giant squids painted in over the top prose. And it "ends" with the major plot unresolved. The performance embraces this mess rather well.