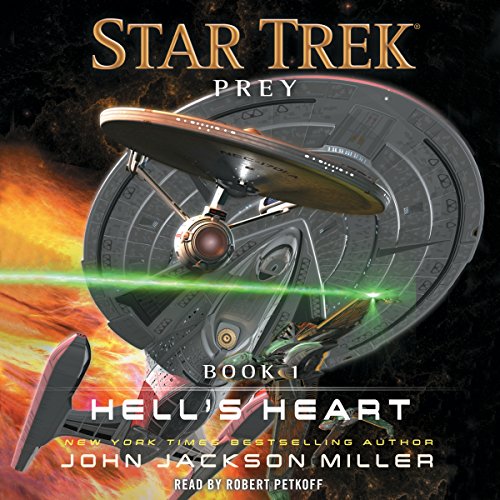 By: John Jackson Miller
Narrated by: Robert Petkoff
Try for £0.00

Continuing the milestone 50th anniversary celebration of Star Trek - an epic new trilogy that stretches from the events of the Original Series movie The Search for Spock to The Next Generation!

When Klingon commander Kruge died in combat against James T. Kirk on the Genesis planet back in 2285, he left behind a powerful house in disarray - and a series of ticking time bombs: the Phantom Wing, a secret squadron of advanced Birds-of-Prey; a cabal of loyal officers intent on securing his heritage; and young Korgh, his thwarted would-be heir, willing to wait a Klingon lifetime to enact his vengeance.

Now, 100 years later, while on a diplomatic mission for the United Federation of Planets, Captain Jean-Luc Picard and the crew of the USS Enterprise are snared in the aged Korgh's trap - and thrust directly in the middle of an ancient conflict. But as Commander Worf soon learns, Korgh may be after far bigger game than anyone imagines, confronting the Federation-Klingon alliance with a crisis unlike any it has ever seen!

What listeners say about Hell's Heart

Well not to sure what to make of this story. First I thought great and then OMG Really. Then okay. So we will listen to the second book

Great story with great characters spread over 100 years and two Star Trek series, with many twists and lots of intrigue

Really really really. Enjoy this book from start to finish. Great listen. Narrator is excellent. What more do you want in a book great story great listening keep to their from the end. When finished this book went out and bought second book. I’m now halfway through that book and I’m looking forward to getting the third book from my holidays. Great listen

I don't often listen to Trek stories but really enjoyed this and looking forward to part two. Good narration and a story with twists and turns that had me hooked.

I've not kept upto date with Trek books since the Destiny trilogy. I know little of the Typhon Pact storyline, but that doesn't matter here.
Even though this story takes place after the above mentioned storylines, you don't need to know much about them at all.
I have only listened to book one so far, and I will do the others soon.
This story spans two time periods, most is set on the Enterprise E in 2386, and you get some chapters as kind of 'flashbacks' to the Enterprise A, set after The Search for Spock; this is done to help you understand how things in 'the present' timeline have come about.
This story delves deep into Klingon culture and politics, but without being boring. There is lots of mystery, action and a good amount of 'trek-nobable'.
The narrator does a brilliant job of using different voices for the characters and IMHO does a pretty good job of Picard, Riker and Worf. His LaForge isn't as spot on.
But, his general narration of the book is good and he has the right tone for each type of scene - whether it's a fight scene, political arguments or problems with the engineering team in the transporter room.
I highly recommend this story!

really good great for story and A really interesti

a good TNG/TOS book and with a few twists. looking forward to listening to book 2

This Star Trek novelisation contains the lot: Klingons, the next generation crew, and the original crew. Both political intrigue and action make this novel difficult to put down! The narrator should be credited for his excellent Klingon and good English accent for Picard.

Great start to a series.

I've listened to countless Star Wars and Star Trek books. The former more than the latter due to their prevalence. This book has all the trappings of good sci fi. It's development of characters was a bit slow, but the pacing of the plot worked well. Worth a monthly credit any day.

John Jackson Miller hits the ball out of the park with this new series! Robert Petkoff's narration is a treat! This story picks up in the continued post television run of all trek series that the creative authors of the Trek universe have added to. This 3 part series deserves that length, the character depth the battle scenes the background it's all wonderful!!! Hopefully audible & simon and Schuster see the incredible popularity of unabridged Star Trek and bring more treasures like this to the material continuum for purchase!

No SFX or Music?!

So far so good story wise, but where is the production value? The narrator needs a tad bit of work but some of his voices are ok, he doesn't seem to capture the feel of the Klingons. Also can we get any kind of sfx or music at all, it would help immerse and invest us readers into the stories like they do in the Star Wars audiobooks or many other audiobooks, its just so quiet with only his voice.

Why wasn't this a Movie?

It has been awhile since I have read anything Trek related and. ow I'm hooked...again. This is a very fast paced book, many twists and turns that extends across two separate time periods. Its refreshing to see Riker as a admiral on the bridge of the TITAN and Picard with Worf as his XO back on the bridge of the ENTERPRISE E.
if the other two books in this series are as good as this one was then you can't miss picking them up.
Qa'plaq!!!

Would you try another book from John Jackson Miller and/or Robert Petkoff?

What could John Jackson Miller have done to make this a more enjoyable book for you?

Could you see Hell's Heart being made into a movie or a TV series? Who should the stars be?

I was very happy when it was finally over.

Let it be known to begin with that there is no ending in this book.
lots of characters with similar nsmes and voices.
i am a star trek fan. there were some very good sections of the book but it really couldn't digure out any direction and added a lot of useless filler.
extremely disappointing.

Not great, but not bad either.

The amount of people giving this 5 stars just continues to show that the average person doesn't understand stories or rating systems for that matter.

While still well written and performed. The actual story, because of the above reasons, falls rather flat. Not the worst Trek by a long shot, but not very good either. I'll see where book 2 goes, but I'm afraid it'll just be more predictable stretching out of a story that would easily fit within an hour otherwise.

One of the better Trek books out there

Great story. Intricate and detailed. Crosses between TOS and Next Gen nicely. Well narrated and a good long story!

Must be a lot of work to "act" & produce such a complex story. Fot any fan, it's a great listen. Thank you. All the intertwined back stories & timelines are set just well enough to keep the imagination of the movies & t.v. series in mind, along with great representation of the character voices. Using this for a great listen, while I work. Wish there could be hundreds of hours more just like it; but would settle for just another trilogy. On to Book 2!!!

Finally - a great story arc in the making

I listen to audio books as much as I can. I had stepped away from the series for awhile as I wasn’t very pleased with character development and story lines. This series, however, has got me hooked. Each chapter builds on the other and expertly weaves a wonderful storyline while maintaining a great balance of pace. I really liked these audio book chapters and how they are assembled in 10-15 minute blocks that i can pause at the completion of a scene and pick up again later.