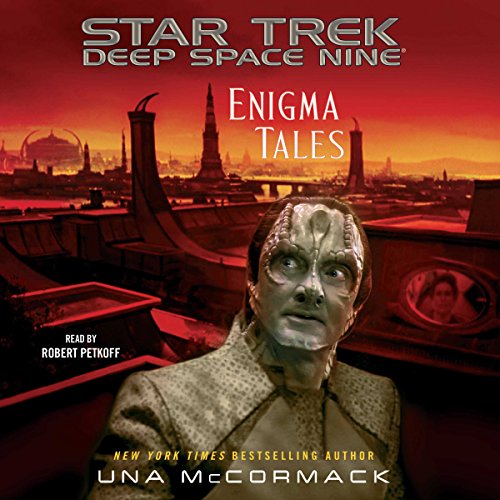 By: Una McCormack
Narrated by: Robert Petkoff
Try for £0.00

From the New York Times best-selling author of The Fall: The Crimson Shadow comes a compelling and suspenseful tale of politics and power set in the universe of Star Trek: Deep Space Nine.

Elim Garak has ascended to Castellan of the Cardassian Union...but despite his soaring popularity, the imminent publication of a report exposing his peoples' war crimes during the occupation on Bajor looks likely to set the military against him. Into this tense situation come Dr. Katherine Pulaski - visiting Cardassia Prime to accept an award on behalf of the team that solved the Andorian genetic crisis - and Dr. Peter Alden, formerly of Starfleet Intelligence. The two soon find themselves at odds with Garak and embroiled in the politics of the prestigious University of the Union, where a new head is about to be appointed. Among the front-runners is one of Cardassia's most respected public figures: Professor Natima Lang. But the discovery of a hidden archive from the last years before the Dominion War could destroy Lang's reputation.

As Pulaski and Alden become drawn into a deadly game to exonerate Lang, their confrontation escalates with Castellan Garak - a conflicted leader treading a fine line between the bright hopes for Cardassia's future and the dark secrets still buried in its past.

What listeners say about Enigma Tales

I really enjoyed this book

This was a great book. it's been very well read. Garak has grown a lot as a character and his relationship with Bashir has been explored nicely contrasted against the events of his life now

good continuation of Garak's story and well written.
I would recommend to anyone reading the DS9 series of books.

Is ok, though I'm more of an action trek fan.. .
Well written and good character development.
Is particularly interesting to see a version of what happens to Cardassia and Garak.

The story was not the best but Peter
Petkoff brings all the characters alive. I just love Garrick

powerful Cardassia, and yet struggling to bring life in this dustbitten world. intrigue, politics, Enigma.

Garak has done well for himself!

this audiobook took me a couple of hours to really get into, but I think that's my fault not the fault of the story or performance.

Enjoyed and would recommend! Just wanted some actual interaction between Julian and Garak! However, still worth reading as it Garak is such a good character to keep on developing.

I enjoy this book very much, there were good characters and a good storyline. My only complaint is the villain of the piece was a human never mentioned anywhere else in the book, also when Polanski is held captive she see her kidnapper but never mentions that he is a human. You may say why would she but they are on Cardassia prime so unless he was a cardassian , his species should have been commented on. I think it would have been more of an inigma if the bad guy had been Parmak , Garak's friend and a doctor Garak interrogated when he was in the obsidian order. I think that would have been a good plot twist.

This book for me was interesting but unless u are a hardcore trekie and can handle politics this is not for u. it is nice to hear what has become of cardasia prime after the war.

Good Story for those following Garak

It's a good story for Star Trek fans it gives us more about what happens to Cardassia after the Dominion War, But the stories nothing special and on it's own really didn't keep my attention.

I thoroughly enjoyed this writers presentation on the Cardasians and their post DS9 story. DS9 was always the ‘messy’ complex aspect of the Star Trek Universe that is an obvious of Earth’s own past and current events. Here the author has brilliantly taken that theme and expanded on it bringing about a moving and dynamic story. Its no exaggeration to say I was moved and found emotionally involved with the characters. I truly hope there are and will seek more books by this author. Bravo!!!

Must read for any DS9/TNG fan

While I must admit I’m biased as I have told many that my favorite Trek characters are Garrek and Polasky, this book is truly the best (out of a couple dozen books read) I have ever read/heard.

The comparative struggles to a young newly democratic free Cardassia is so perfectly parallel to struggling democracies that humidity faces today.

From covering the “fake news” issue, demagogues, to admitting past mistakes, to not be fearful of admitting the truth and keeping honest conversations going; this book is truly breathtaking and perfect example of Star Trek core values it’s been promoting for 60 years.

The voice actor also did a superb job, also the best I have heard from any audiobook.

Absolutely a must for Garak fans.

Una does an excellent job of writing for Garak and Robert Perkoff voices him to the letter!

Loved that this was a story with Garak. Sad that Bashir was sick though, he should have been a pen pal.

Well first the author did not bother to create a truly cardassian society he or she simply took a human culture and overlaid a few cardassian terms. At no point did the story have a true Star Trek feel. To be honest this story read more like a mediocre fanfiction than a serious Star Trek novel.

Well read as always. like the setting but is a tad boring in spots as the writer goes on forever on nothing. still enjoyed it as I love the characters

Obviously the writer has the technical ability, but the story is very, very, very boring! I'm a big Star Trek reader this has the potential to be a great book but it turned into a really boring story.