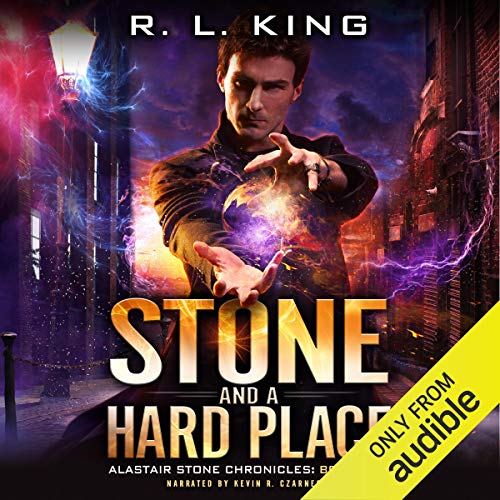 Stone and a Hard Place

It's hard enough for Alastair Stone to keep his two lives - powerful mage and mundane Occult Studies professor - separate without an old friend asking him to take on a new apprentice. Especially after a university colleague wants him to investigate a massive old house for things that go bump in the night. Still, Stone figures it's an easy job: just turn up, put on a little show, and announce that the house is clean.

Only it isn't. A malevolent spirit is reawakening in the basement, imprisoned between dimensions and intent on escape. If it succeeds, countless people will die. Worse, a trio of dark mages want to help it break free so they can control it for their own sinister purposes. They'll do whatever it takes - including seducing Stone's young apprentice and using him against his master - to get what they're after.

With time running out, Stone has to stay alive long enough to uncover the spirit's secrets. But even if he does, he fears that his own power won't be enough to send it back.

What listeners say about Stone and a Hard Place

Looking forward to the next instalment. Good mix of story and action. Love the broody main character.

I was hoping for my next series addiction. Sadly I was disappointed. I'll start with the bits I did like, Alistair himself was ok and I think given a few more books his character will grow and become stronger and more likeable. The world was ok and the magic system while not unique could have kept me reading. The story and plot were also ok for a first book in series, and there was definitely potential hidden there.

However there were many many things that made me wonder why I kept listening. First off, why on earth did no one use a mobile phone or internet if this book was published in 2015? Secondly Ethan was an annoying, snivelling, poor excuse for a teenager and his selfishness and lack of any form of character drove the whole plot forward. He wasn't even bad in a villain sort of way, just incredibly weak and I hated that we got his point of view so often. Bringing me on to the next, the constant switching of points of view, I literally had no interest. In audio, due to the monotone nature of the narration I found it hard to work out who was who. This was, in my opinion, a bookish example of being told what was happening instead of being shown, leaving the characters feeling very flat to me. The style of the story telling itself was not for me, and sadly I will not be picking up any of the author's other works

should I tell doctor stone?

I contemplated requesting a refund, but wanted to write a review and warn potential purchasers: Here's everything's wrong with this book (BTW, not much right!!)
1. Gullible apprentice
2. Master Mage who gets beat up by thugs,with no power, AND can't win a battle with young mages with less experience. Wimpy.
3. unrealistic bad decisions by characters just to increase suspense
4. bad writing
5. university professor whose research skills are equal or worse than 3 less trained evil mages. So much for smart PHD's
6. apprentice ponders the choice between deception and truth - consistently chooses deception.
7. I paid money for this. It should be free!!
You have been warned.

A Very Strong Start to the Series

I often struggle with getting into new books. I need to care about the characters and be intrigued by the story or I quickly lose interest. Often times the setup and character development involved in starting a new series is just painful to me. I also hate it when everything is spelled out. I need to use my imagination and to be kept guessing in order for a book to hold my interest. This book did a great job of avoiding the pitfalls that often turn me off when starting a new series. Information about the world and the characters came in snippets and through dialog rather than lengthy set up.

I was admittedly inclined initially to parallel Stone with Dresden, but he quickly pulled away as an independent and distinct character, the similarities being entirely superficial. there is clearly a Dresden influence in Stone, and I could easily see them inhabiting the same world, but at the end of the day, the comparison is more akin to a musician inspired by another musician. if you like one, you'll probably like the other, but each is different and unique in its own right.

The story had a few minor bumps here and there, but new series often do. Even my all time favorites have a few rough spots, particularly in the early novels. Overall though, it was a very entertaining read. I was hooked early and stayed engaged. I am invested in the characters and look forward to seeing where the story goes next. I may even have to read the paper books rather than wait for the rest on audio. anyone who knows me knows this is quite the compliment.

Everyone in this book is stupid

I've returned a few books and thought about returning this one but was curious about the ending so I decided to keep plowing through it. The lead character is an idiot. I had to keep telling myself the kid is actually realistic because a teenage boy would actually destroy the world to get some. But I have to draw the line when even the villain is an idiot. I have about an hour left in the book and I'm pretty much hoping they all die horribly.

I had picked up this book for the e-reader a while ago but I haven't had much time to read so when I saw there was an audio book I jumped at it. it's from an unknown author who advertised on Facebook with something along the lines of if you like the Dresden Files give this a shot, and I did. It was great! seriously worth a listen.

beyond mediocre. poorly written and narrated. major problem with "telling, not showing". we are constantly told how amazing the main character is at everything, how charming, how cool how this, how that. but they show nothing of it. its slow and pedantic, the characters bland and generic verging on unlikable being their only real trait.

pass this one by. not worth it, cash or credit. if audible actually kept their "satisfaction guarantee" id return it.

the narrator was so good he enhanced the good story. I throughly enjoyed the book.

Wish the whole series was in audible format. A little like Dresden in some ways. Excellent character development. Excellent reader. He made it come alive. Exciting adventure. I believe I have found a new favorite author.

Yes I would. The book captures you and holds on. I have already recommended it to a friend that likes urban fantasy.

What about Kevin R. Czarnecki’s performance did you like?

His range of voices really brings the story alive. He is the voice of Dr. Stone. Replace him and there will be mutiny.

definitely a struggle to finish. the narrator was good, but I will not be reading the others in the series.