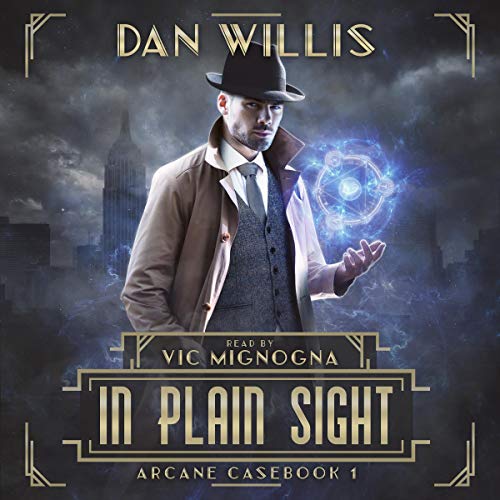 By: Dan Willis
Narrated by: Vic Mignogna
Try for £0.00

When a magical plague is released in a Depression-era New York soup kitchen, private detective Alex Lockerby finds himself in a desperate hunt to catch a madman before he can strike again.

His investigations lead Alex to a famous thief, a daring heist, and the search for a mythic book of ancient magic, but none of that brings him any closer to finding the man responsible for the massacre. With the police and New York’s Council of Sorcerers desperate to find the culprit, Alex becomes a suspect himself, thanks to his ties to the priest who ran the soup kitchen.

Now Alex has his book of spells, a pack of matches and four days to find out where the plague came from, or that authorities will hang the crime squarely on him.

“Dan Willis is an awesome writer and you should buy this book.” (NYT best-selling author Larry Correia.)

What listeners say about In Plain Sight

it was quite refreshing to read a magic book without swearing, I really enjoyed the book i have already bought the second and third before even reading the book

I was not sure what to expect of this book, as they say never justge a book by the cover and that is exactly what I did. I then read the blurb and enjoyed the hook.

I was apprehensive of the narrator for the first 5 minutes but was rapidly won over by his smoth eloquent tones and wonderful style.

the story took me on a thoroughly enjoyable roller coaster of twists and tursn with some ingenious theories and creations whilst also littering the works with historical truths.

immediately bought the second in the series. The world created is nostalgic yet full of magic.

A pleasant change of theme

I have always liked the old P.I. genre, though I haven't read as much of it as I should. This story blends the genre with magic, predominantly Rune Magic in an intriguing way. I am glad I tried the audiobook.

Good story but the narration...

The story was well conceived and very creative but, call me crazy, a hard boiled detective shouldn't sound like his prepubescent little sister. It's not that the narrator couldn't do deeper voices but clearly chose not to. Haven't read the Kindle version first I was anticipating a gravelly, tough-guy voice. Disconcerting and disappointing to listen to him speak. Also, if you're a narrator and it's your craft, try to learn as many words as you can. And if you come across one you're unsure of (imperilously is not a word in English, imperiously is) don't just breeze through it like you know what you're reading. Ask the Googs, or your sound editor. (No one ever said I wasn't petty.)

the story was good. the only problem i had was the narrator made the main character's voice sound like he was a seventeen year old who had yet to go through puberty.

it's not that it was "bad", but it most definitely was not good - tedious & heavy-handed with one dimensional characters. I managed to listen to the entire thing, but that was mostly due to the quality of the narration/performance.

Regarding some (favorable) comparisons to the Dresden Files: they are a stretch at best (in terms of writing quality, story arc, character depth). Not even in the same league as the Dresden books.

My only prior Urban Fantasy experiences are Dresden so I'm not as prolific as others but I enjoyed the back out of this book.

In my opinion, it's a pretty good yarn, but the narrator REALLY makes the story come alive. I hope the narrator gets to do more in the series!

This is a fantastic entry into a new urban fantasy series. The narrator does a great job in bringing the series to life and keeps the pace moving and the suspense high. The story is gripping and entertaining. If you enjoy urban fantasy with honest characters that feels real, give this story a try.

A lot of fun

This hit every beat you would expect from a detective noir, but felt fresh and exciting. It left me wanting more and I recommend it for any fan of urban fantasy or detective noir.

I'm a big fan of Old Time radio mysteries like "The Shadow", so I was really interested in this. Normally I'm not a big fan of crossed universe stuff (like mixing the mystery w/ the magic element) but this story really made it work! I know that some audio books can be a bit dry, and maybe a little hard to listen to. Not true w/ this one! Vic Mignogna's acting abilities really shined w/ his narration, and in some spots, I actually forgot it was him doing the reading! It had the elements of a good radio drama, (minus the music and the commercials). It really kept me transfixed! I fact I stayed up til 2:30 in the morning just so I could finish it! Bravo!

Excellent story. Grabs you in the first chapter. First book from this author and reader. Excellent-I have never been a fan of any sort of “science fiction”. Boy was I pleasantly surprised.

The top notch writing combined with an entertaining and engaging performance makes this one a winner!

Can't wait for the rest of the series

I am in the middle of the written series and love listening to audio books when im unable to take the time to read. Seeing book one on aubile makes me very excited to finish the series then experience it all over again in audio format.