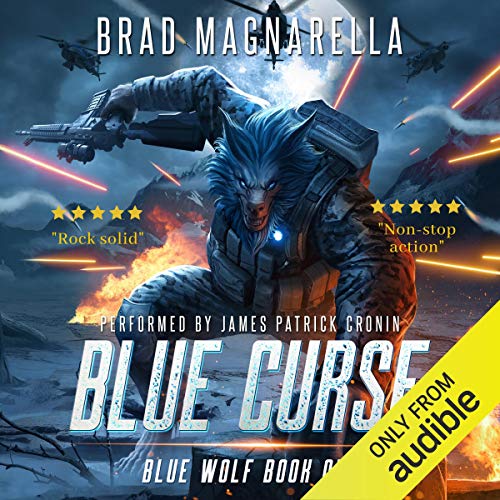 By: Brad Magnarella
Narrated by: James Patrick Cronin
Try for £0.00

Cursed by a blind witch in a remote corner of Waristan, Special Ops Captain Jason Wolfe finds himself transforming into a creature of local legend, a lupine referred to in fearful whispers as Blue Wolf.

Faster, stronger, and more lethal, he’s the perfect soldier - but not for the US military. To break the curse, Jason must join a war between ancient tribal foes: blue werewolves and the formidable White Dragon.

In a battle spanning from the peaks of Central Asia to the valleys of Manhattan, and with the help of a bookish wizard named Prof Croft, Jason will push himself to the breaking point. Because with the curse now spreading to his mind, he’s running out of time - and the stakes couldn’t be higher:

Win and he returns home to his fiancé, his family, and a future.

Lose and he dies a bloodthirsty beast....

What listeners say about Blue Curse

I read this because I enjoy the Prof Croft series and, if you feel the same then I would suggest you don’t read Blue Curse.

The main character is not a very nice person who, just in the normal course of action, murders an unarmed man within five minutes at the start of the book and has zero qualms about it: it’s never even brought up as an issue.

The plot is extremely basic and the whole book is filled with pseudomilitary jargon that adds nothing and is made worse by continual cliches; the main bad guy the main character at one point killed a bad guy without regret, despite no one having made an attack on him yet, because he “ have the cold dead eyes of the killer“. This is more like a teenage boys’ short story than anything else and, if anything, it has made me less enthusiastic about the prof prof series itself.

You won’t miss anything by not reading Blue Curse in terms of the main storyline and I really rather recommend you don’t.

I try to keep an open mind. i literally listen to all genres. I had the opportunity to get an advanced copy, but i was very skeptical from the description. This book is a very well written, fast-paced, action driven story about an advanced military squad that has to cope with some very unconventional repercussions. The book-cover summary makes it sounds pretty ridiculous, but the book reads more like a Neil Gaiman novel. I hesitate to describe it more as i don't want to spoil the fun.

I have to admit i was very pleased and i can't wait for the next installments!

So hard to find a honest good werewolf book! Nice!

Never thought I'd be giving such a high review. Narration and everything was beautiful, energetic, complex, composed, concise, etc. skilled voice actor. The story well just down right amazing. Very well crafted detailed story, no obvious cliches that make ya groan in disgust. Often left me at the edge of my seat rooting for this or that. Several times humor caught me totally by surprise making me laugh and even surprising me. The depth and believability to the story is literally Rock solid. No magical see through paper characters here. Kudos! Thank you so much for the wonderful story!

Please get more of theese up here im dying for more like this one!

Seems interesting. Though I have to admit the pacing in the beginning seemed a little slow. I guess I just didn’t care for the pondering pace they take to develop some characters. Sort of foresaw the direction the story would take and who the actual bad guys are. Which can only work so many ways before it becomes old hat.

I'll begin by stating I received a code for this audiobook from the author through reddit.

I did not quite know what to expect from this going into it but i was pleasantly surprised. It is a solid urban fantasy military mixture of a novel predominantly set in the Middle East. The lore appears to be reasonably well developed with a few ideas I haven't seen before. The characters aren't terribly complex but it's a fun little romp through the idea of a soldier becoming a tribal werewolf.

Another great series for Brad Magnarella! Jason Wolfe becomes the principle protector for a village in the Wakhjir Providence. Through no fault of his own, he is transformed into the Blue Wolf. The Blue Wolf and White Dragon are the opposing forces, which have been at war for centuries. They are the yin and yang forces of their dimension. Their races have evolved with the genetic ability to transform into the wolf or dragon. Through the presentation of the village history and dragon lore we learn about the conflict between the enemies.

Every hero has a conflict. Jason is not different. He has served 10 years in the army. He is waiting on his transfer papers to go home to his fiancé. One last mission for Jason but things don’t go as planned. Jason becomes a Blue Wolf and becomes embroiled in a battle with a dragon.

Jason is a fighter, a solider, a leader of men, brute force and regeneration from most wounds are his abilities. He is the leader who sacrifices himself and assumes responsibility of his team’s actions. He does not participate in witty repartee. His attitude is get this job done so I can get one with my life. He was the highest-ranking officer when shit went wrong so it is his responsibility to make amends.

There are good guys, bad guys and an organization without any loyalties. There is a cameo appearance of Prof. Croft. Using the world of Croft (if you have not read that series, do so) gives familiarity to the reader of the world of Jason Wolfe

The fights are goods, but… The disparity in abilities and size of wolf and the dragon, leave our hero at a great disadvantage. Even genetically the wolfs have a disadvantage. Their life cycle is shorter than the dragons and there is a finite amount of power they can acquire.
For urban fantasy fans of Jim Butcher, Al K. Line, M.D. Massey, Conner Kressley & J.A. Cipriano, and Brad Magnarella you must this one.

Kudos for James Patrick Cronin for his narration.

great start for a series

I received this book free of charge for an honest review. i liked the prof croft books but i like this better. called for a mission last minute before retiring hes sent out, gets blessed with a curse, hunts the bad guys and joins the mercenary team when it cant be reversed . in a nut shell, i liked the character and will enjoy more to come.

Awesome get it now

I read this book shortly after it was released and loved it. Once I saw it was available on audible I knew I had to check it out and I wasn't disappointed! fast paced story with some really cool characters. Great book!

I enjoyed this book a great deal

5 stars from me on this one, I hope you enjoy listening to it and I hope it brings you tons of fun and excitement. I was just going to say ‘5 stars’ and that was it, but this thing requires no less than 15 words and once I got started explaining why I had to do this, in my opinion, long review, I couldn’t stop, so I just kept going and going and going…well, you get it. Tim

was so good bought the other blue wolf books and Prof Croft, can't wait for more books to come out.

The main character, Jason Wolfe, is instantly relatable and likeable. A Special Ops soldier (because of course, no hero was ever just a plain infantryman) gets cursed and ends up fighting evil on the side of good. This risked being lost in what is an overused story line but doesn't. The characters were done very well, the story flowed throughout, and the narration by Cronin, whom I don't think I've heard his works before, did an excellent job. I'm looking forward to the second book.