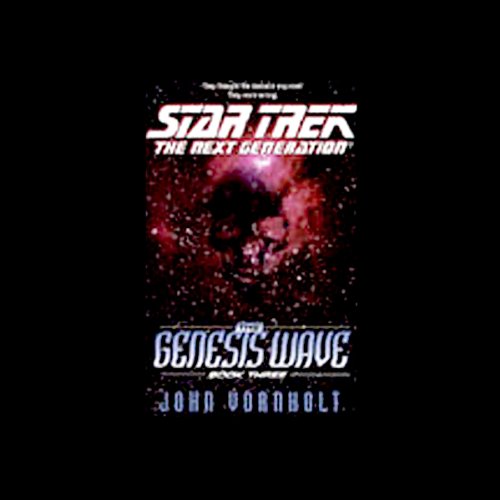 Star Trek, The Next Generation: The Genesis Wave, Book 3 (Adapted)

Sweeping across the Alpha Quadrant at a terrifying speed, a wave of Genesis energy has wiped out whole populations of entire planets, rearranging matter on a molecular level to create bizarre new landscapes and life-forms.

The U.S.S. Enterprise, commanded by Captain Jean-Luc Picard, managed to counter the threat, halting the wave in its tracks and stopping the alien race that had sent the wave crashing through the galaxy. In the process, the crew saved millions of souls and hundreds of inhabited planets from the mutagenic wave. Earth itself, as well as the Romulan Empire, was saved from obliteration.

Now nothing is left to do but clean up the mess the Genesis Wave left behind. Or so it seems. Unknown to Picard and his crew, the use of the Genesis Wave on a galactic scale had weakened the walls between our dimension and one right next door, one that harbors a deadly threat to not only the survival of civilization throughout the galaxy, but the survival of reality itself.

The Genesis Wave, Book 3 is the final volume of an apocalyptic adventure that pits the desperate crew of the Starship Enterprise against a disaster of universal proportions.

What listeners say about Star Trek, The Next Generation: The Genesis Wave, Book 3 (Adapted)

Really nice conclusion to this trilogy.

After listening to the previous two I didn't know what to but expect. It wasn't disappointing and I was equally entertained.

Cracking end to a great miniseries

Fantastic story which is well narrated, well thought through and kept my interest throughout. The voice actors are also very good and the classic Next Generation sound effects really bring this audiobook to life.


Having only a superficial relation to the first two books, it still tells a good story. It
seems like it was made a "Part 3" because it would have been difficult to sell otherwise.
It's basically the Ringo Star of the band. Get it, if you have to have the complete set, but
the second book wraps up everything it needed to wrap up. This is an all new start, with
different characters. Even the subplots are all new.

I was listening to this book while painting my kitchen. Enjoyable, Great sound effects. I Recommend it.

Not bad but felt there were more plot holes and cliche. Ending seemed a little bit contrived. Perhaps genesis force will explain it.

not as good as the other two

the first two books can stand on their own. This book seem to be an add-on because the series apparently needs three books regardless of story length and story plot being congruent. They tried to add on another book. I think the plot while not so bad on its own was really convoluted. It could have been streamlined and simplified. The first two books were pretty straightforward as far as plot went without being idiotic or anything. This book, however, just kind of got really convoluted. It's like they're trying to insert too many themes in the same book and trying to make the political Intrigue with the romulans really super intriguing and so intriguing that it's more intriguing than Intrigue has ever been before. When with romulans, in a simple short Star Trek book, you could easily have plots of Assassins and double agents in the lake without getting too far into my new details. Remember, this is the future, so you can explain some things away with technobabble but just have a plot that involves something like in trigger assassination and have it be pretty straightforward even if it is complexed. Okay so I wouldn't recommend this book. I didn't like it. It is performed well. I did like the voice acting.

story. This is book 3 of it. Excellently told by Tim Russ. A must read for all Star trek fans.