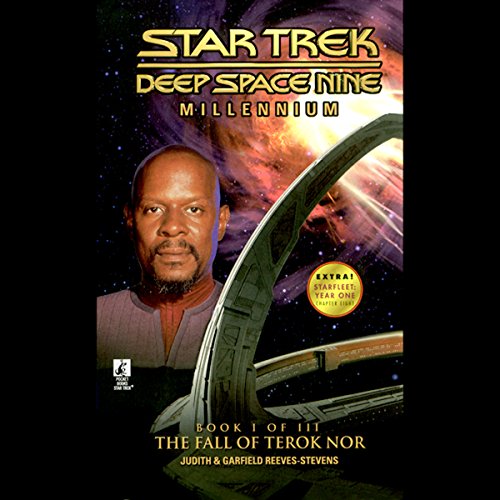 By: Judith & Garfield Reeves-Stevens
Narrated by: Joe Morton
Try for £0.00

Bajor is in flames. The corridors of Terok Nor echo with the sounds of battle. It is the end of the Cardassian Occupation and the beginning of the greatest epic adventure in the saga of Deep Space 9.

Six years later, with the Federation losing ground in its war against the Dominion, the galaxy's greatest smugglers, including the beautiful and enigmatic Vash, rendezvous on Deep Space 9. Their objective: a fabled lost orb of the Prophets unlike any other, rumored to be the key to unlocking a second wormhole in Bajoran Space, a second Celestial Temple.

Almost immediately, mysterious events plague the station: Odo arrests Quark for murder; Jake and Nog lead Chief O'Brien to an errie holosuite in a section of the station that's not on any schematic: and a Cardassian scientist whom even the Obsidian Order once feared makes an unexpected appearance. With all these events tied to a never-before-told story of the Cardassian withdrawal, Captain Benjamin Sisko faces the most dangerous challenge of his career. Unless he can uncover the secret of the lost Orb.

I have read this book in its entirety and the audible experience makes it more enjoyable.
the narrator was hit and miss trying to mimic the voices. would have preferred his own voice so in my head I could give it the inflections and nuances.
the voice are unnecessary as it's unlikely that anyone would purchase this if they were a fan of DS9 and probably find the mimicry painful in places

Why make an audio version of the first book to a trilogy and not make the other two? For someone like me who only listens to audio books it is highly irritating and I see no point in listening. Waste of money unless after all this time they finally plan on making the next two.

The storyline of this book falls neatly into place in the canon of DS9. It fleshes out a portion of the saga, adding detail and nuance. The characters are basically true to form. It's an interesting story. As such, I enjoyed it very much.

The narrator's attempts to voice the various characters were just plain atrocious and a major detraction from the book. Odo's voice was grating to the point where it was difficult to listen to it. Sisko, Kira, Dr. Bashir, Worf, all bore absolutely no resemblance of any kind to the TV characters. Only Quark had any resonance. The narrator would have been better off not trying.

They can keep the sound effects too. They add nothing to the audiobook.

It's a shame that such a fine story is very nearly spoiled by the poor narration.

Would you consider the audio edition of Star Trek, Deep Space Nine to be better than the print version?

Yes, especially if yoour a truck driver or are on a cross country trip or vacation beach!

What was one of the most memorable moments of Star Trek, Deep Space Nine?

The search for the orbs!.

Outstanding performance. Joe Morton is one of my favorite sci-fi actors!

Yes! Outbound leg of my route is 3.5 hours of highway driving.

Where are the rest of the Millenium series as audiobooks? Why aren't more Star Trek books made into Audiobooks? They are better (more positive) than the Star Wars dark side heros.

A tip before you purchase, this is book 1 of 3 the other 2 are not available on audible however this story is good on its own. Joe Morton does a fabulous job as narrator. I have liestened to this twice itsca ton of fun and takes you back to DS9! Definitely one of the better Star Trek books

What was one of the most memorable moments of Star Trek, Deep Space Nine?

The search for the orbs

Niether disliked nor liked it

A good listen if your traveling or have a short amount of time to listen. Good Sci Fi listen

Only the Quark character sounds like the actor. Sisko: terrible. Kira sounds like a man. Nog terrible. Jake: not bad. Most of the characters sounds the same. Morton is no Mark Thompson who is excellent or even Robert Petkoff who is very good. In addition, the story is shortened to the point that it jumps from one scene to the next. I read the book and this was just a poor job of converting a paperback to audible. So disappointed. Last, where are books 2 and 3??? What is the point of making a book 1 that ends abruptly when there is no book 2 or 3.

The reader does a great Quark. The story ends abruptly, to be continued in the next book, which I can't find a audio version of. So, I don't recommend starting this one.

The authors did another fantastic job with all of the DS9 family members. I liked Nana Visitor's reading of DS9's Emissary so much that I put off listening to this story since it had a different narrator - but now that I've heard it I think Joe Morton did a wonderful job with all of the challenging character voices. I really hope someone would record the second two books in this trilogy!

the story was weak, and the ending was worse. actually sorry I listened to it.