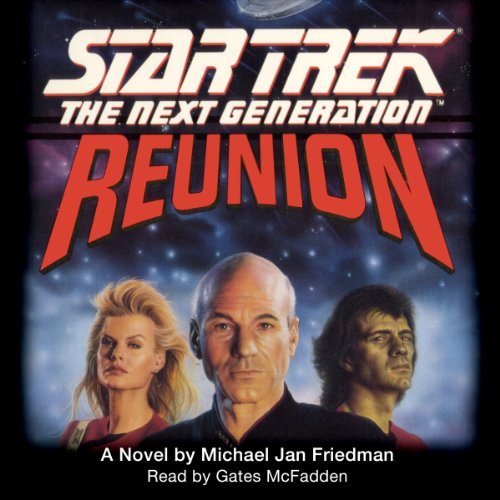 By: Michael Jan Friedman
Narrated by: Gates McFadden
Try for £0.00

Before he commanded the Starship Enterprise, Jean-Luc Picard was the captain of the deep space exploration vessel, the U.S.S. Stargazer, on an incredible twenty-two year voyage. Now Picard is reunited with his old crew for the first time in over a decade, on a mission to see his former first officer installed as ruler of the Daa'Vit Empire.

The reunion turns deadly when a ruthless assassin begins eliminating the U.S.S. Stargazer crew one by one. Picard's present and former shipmates must join forces to solve the mystery of the Captain's past, before the killer strikes again.

What listeners say about Star Trek, The Next Generation: Reunion (Adapted)

A fantastic abridge version of the story


Gates McFadden was a fantastic narrator. She brought the characters to life and gave her cast members there were own wonderful accents in her unique voice. The story was a “to be murdered mystery” with links to Picard’s past. It kept you guessing throughout and brought you insight into Jack’s past too.

I liked the new characters and the mystery was also very good.

She does a great Deanna Troi impression, but her Beverly Crusher voice needs some work.

I really like meeting new characters in the Star Trek Universe. Unfortunately, many times, they are simply introduced, but never developed. Reunion does a great job of giving the reader a full glimpse at these new people in just a short time.

I really enjoyed this book. Having grownup with TNG, it was great to have backstory from the Star Gazer and more on Jack Crusher and his death. These were big themes in the series, wish I had known it earlier!

My one wish for it would be for it to have been a full length, fully developed story. Gayes McFadden was great, I enjoyed having one of the original actors as the narrator.

my first audiobook I bought on cassette in the 90'

enjoyed it, story not told in the series. Dr. Crusher's husband is told well.

While I admire Gates McFadden, she wasn’t very good at differentiating voices. The story was not very easy to follow and not very interesting or believable. Who were the Klingons? They were humans? The murders were honorable/dishonorable? Confusing and not interesting.

Gates did an amazing job with narration and voices. The story was very interesting and engaging.

I loved this book way back when I first read it. love the audiobook even more.

Gates McFadden does a fantastic job.