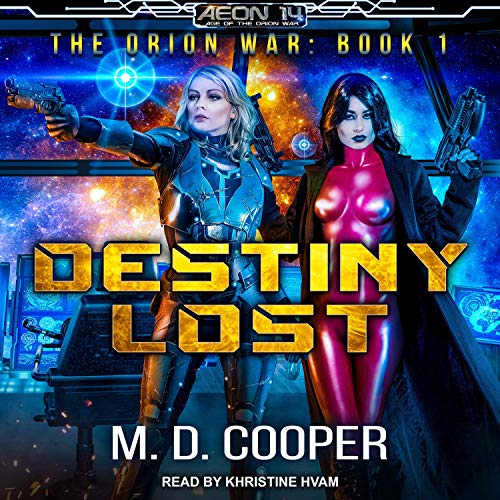 A little smuggling, some drinking contests, and captaining her star freighter, Sabrina. But when she picks up a mysterious shipping container on Coburn Station, things begin to go wrong. She finds herself at odds with The Mark, a dangerous pirate organization that wants the cargo on her ship.

Inside the container she not only finds a woman, but a secret thought lost millennia ago. The woman is Tanis Richards, and she knows the location of the Intrepid, a missing colony ship from humanity's golden age.

Sera knows how to help Tanis and the Intrepid. But to do that, she will need to reveal a secret that will pull her back into a life she left long ago. A life from which she was exiled in shame and disgrace.

Tanis doesn't trust Sera; and Sabrina's rag-tag crew is nothing like what she's used to, but she's going to have to rely on them to avoid capture and get back to the Intrepid. As Tanis and Sera battle pirates and interstellar governments, the two women forge a friendship that will forever shape the destiny of humanity.

What listeners say about Destiny Lost

This book can stand alone, however, I feel that it also should be listed as book 4 in the Intrepid Saga/Orion War Series as it follows book 3 in the Intrepid Saga and at the same time introduces new characters with a story of their own that come to interact. The story is fast paced and full of fight. I recommend that you start with book 1 of the Intrepid Saga, they are all good books and I personally believe you will enjoy them and have a better back story on a number of the Intrepid characters.

I thought just an only one book. Story continues to on ward.

I listened to the audio book on a trip. Great story with great characters. The reading quality was top notch.

Twenty minutes in, and this book was set aside to see if there was something better in my To Be Read list. Just feeling a little exhausted with characters that are basically women's body parts and not a person. This set of body parts also happened to be the ships pilot, but all we really know about this spaceship pilot is her body parts. And the way she looks while walking away. No reason to go back to this one.

It wasn’t as raunchy as the cover makes it seem lol. Interesting space adventure that’s more of a made for TV movie then a cinematic film made for theaters. But I don’t mind listening to the next.

Space Opera at is Best!

Destiny Lost is Rock um Sockum true to force Space Opera in light of classics such as Star Wars. You will grow to love many the characters like ships Captain Sarah, and her AI. The beautiful woman hidden in there cargo by bad guys, and her AI. The book is a non stop riide. With many battles fault in space.

A wild ride with hope, love, desperation and epic struggles. 2 - 6 here I come!

loved it.. cant wait to listen to the next one. these keep me super interested

I was surprised by the clothing descriptions for the female heroes in this Military Sci Fi book. The unstated message was to look good while kicking butt. Also reminded me that some of my friends claim to buy the Sports Illustrated Swim Suit edition for the articles.

The female characters are all very sexy (sarcasm)

Within the first few paragraphs we learn that a female pilot is wearing a string bikini and heels. Throughout, there are detailed descriptions of what every woman is wearing scene to scene -- mostly similar fashion to The Matrix movies. All of this missed the mark and quickly became annoying. Considering the hyperfocus on innuendo, the book is actually very chaste, with no sex and the author often bending over backwards to avoid having the "good guy" characters kill anyone. It just comes off as juvenile; as if pandering to teenage boys. All of this could be forgiven if the story was riveting, but it simply meanders. I made it about 90% through because the setting IS interesting, but I found that I just couldn't bring myself to care about any of the characters or what was going on.