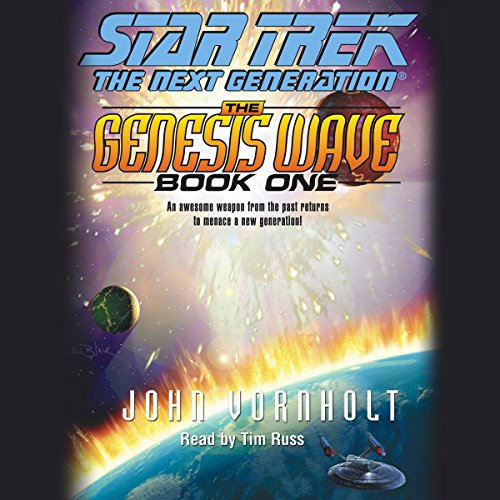 Star Trek, The Next Generation: The Genesis Wave, Book 1 (Adapted)

Intended to create life from nothingness, the Genesis Wave had the potential to become a weapon of awe-inspiring destructiveness, capable of rearranging matter and life energy on a planetary scale. After the cataclysmic explosion of the Genesis Planet, and the Klingon Empire's attempt to steal the top-secret technology for its own military purposes, Starfleet wisely decided to destroy all data and records on Project Genesis, hoping to bury its deadly secrets forever.

Nearly a century later, all that remains of Genesis is the knowledge stored in the mind of an elderly, almost-forgotten scientist named Dr. Carol Marcus. But Dr. Marcus has gone missing, and a menace from bygone days has come rushing back with a vengeance.

Sweeping across the Alpha Quadrant at a terrifying speed, a mysterious wave of energy is wiping out populations of entire planets. The Starship Enterprise, commanded by Captain Jean-Luc Picard, is the first Starfleet vessel to discover the threat. Billions of living beings and hundreds of inhabited planets lie in the path of the mutagenic wave. Earth and the Romulan Empire face total obliteration.

To discover the origin of the wave, Picard and his crew must probe the long-buried mysteries of the past. But even if he can uncover the shocking history of the Genesis Wave, is there any way to save the future from its unleashed fury?

What listeners say about Star Trek, The Next Generation: The Genesis Wave, Book 1 (Adapted)

I have quite a few Star Trek audiobooks but I found this a bit disappointing. Tim Russ's narration is somewhat lacklustre, especially his awkward take on Picard's voice. Haven't even bothered with the next Volume.

A good start to the series

John Vornholt is an experienced Star Trek author, and most of his books are solidly entertaining. This one is no exception, as Russ renders a competent reading. Be very aware, however, that this is book 1 of 3, so it isn't satisfying as a stand-alone read. In other words, be prepared to commit to the entire series before you ever get this installment.

This was my first audio book experience and I never thought listening could be so dynamic. Tim Russ gave a great performance in his readings. The music and sounds supporting the reading were spectacular.

I highly recommend this series!!!

This was a great book. The Star Trek sound effects add to the story, it wouldn't be the same without them.

Tricky, you must buy another book to complete nove

The story is good yet I did not like the fact that is not a complete book. I feel like it was a scam. Did not buy part two.

This book was the worst audio program I have listen to. The story was killed by many cheesy sound effects witch not only cluttered the book, trying to add to the beleaguered content, but killed what ever story line there was. If you like Sci-Fi and Start Trek don't bother with this try some thing like Enders Game if you have not read it.

If I could I would give this negative 5 stars.

Narration is excellent. I believe Tim Russ was on Star Trek. An excellent storyline, with nods to Star Trek 3. A must-have for any Star Trek fans.

This really felt like a Gripping episode of Star Trek: The Next Generation, which I would have enjoyed much more if it hadn't been abridged.

Great narration by Tim Russ, flawlessly moving from voice to voice! Can't wait to listen to part 2! The story has such a great mix of characters with nostalgia from the original series!

At first i was not sure about this story line.. But after hearing Tim Russ narrate this book I have changed my mind. This series is a prefect story line and brings a fresh cross over of the Genesis Project into the ST:TNG To bad the books are only 3 hours long.

Only Trekkies need apply. First, you'll need books 1 and 2 to complete the story, so keep that in mind. All the Next Generation characters get together for this sequel to the Genesis Wave story. It is fairly fast paced, but also superficial, with more emphasis on sound fx than on any real substance. There is some action and all the characters stay true to form from their TNG legacies. Die hards may enjoy this, but this was more like listening to the TV show, than reading a new novel.