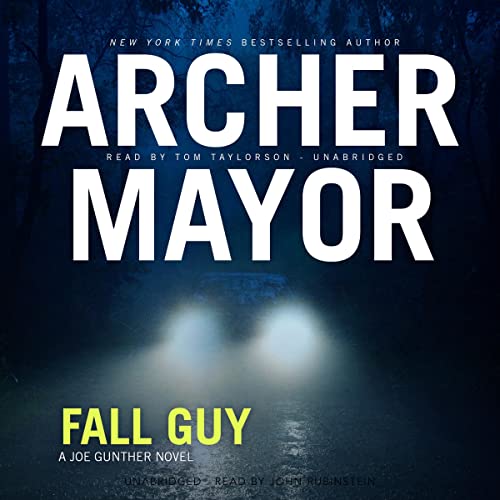 By: Archer Mayor
Narrated by: Tom Taylorson
Try for £0.00

In Archer Mayor’s Fall Guy, a body found in the trunk of a stolen car leads Joe Gunther and his team to crucial evidence in an infamous unsolved case from years past.

A high-end stolen car is discovered in Vermont. A car filled with stolen items from a far-flung two stage burglary spree. But it’s what is in the trunk that brings Joe Gunther and his team from the Vermont Bureau of Investigation. In the trunk is the body of burglar in question—one Don Kalfus. Complicating matters, while the body was found in Vermont, it appears he was probably killed in the next state over, New Hampshire.

The task force charged with finding out why Kalfus is murdered soon faces another problem. Within the pile of stolen cell phones found in the car is evidence of a notorious unsolved child abduction case from years earlier.

Now the seemingly simple case has become more complicated and deadly, leading Gunther’s team to be pulled from the New Hampshire coast to near the Canadian border as they attempt to find and capture the psychopath responsible for a tangled, historical web of misery, betrayal, and loss.

What listeners say about Fall Guy

Another brilliant audiobook by Archer Mayor continuing the tales of Joe Gunther and his team. Keeps you wanting not to switch off as you get so gripped.

Good to revisit Joe and the rest of the gang again. Waiting for the book to be published seemed to take a very long time - and now the story is over. All too soon.
As is usual for Mr Mayor, Fall Guy is well structured and full of twists and turns. The narrator, Tom Taylorson does a great job with and it all felt ‘right’. My only regret is that it’s finished. Hope there will be more to come!

I like Tom Taylorson as narrator, he’s a steady pair of hands. The book has a few twists and turns as usual, but you can always rely on Joe, Willy, Sam and Les to work out who done what and when and how.

More curves and up and downs than a roller coaster…

Pure Archer Mayor… there is sick people out there. Protect your space from real people that are out there.

Gunther and the gang did it once again! What a great start middle and end

Another good story for the series

I truly enjoy the Joe Gunther series and will anxiously await the next book. Tom Taylorson’s narration is terrific too.

The Best of the Joe Gunther Series

I think this was the very best of the Joe Gunther series. The story was really good and the twists were very unexpected. As usual Tom Taylorson’s narration is masterful and brings enjoyment to the story.

This is probably one of the most lack luster boats in this series, blah. felt like the end was rushed.

This has been my favorite of the books in the Joe Gunther series. Tom Taylorson brings all of the characters to life! I hope Archer Mayor has more books for us!!

The cruelest evil of human society is unveiled with out giving away the most horrible truth. Joe Gunther and his team are portrayed by Tom Taylorson with perfection once again.

Good story. Tom Taylorson was great as usual. But it was shorter than most of his books

I love Archer Mayor and all of his amazing characters, I miss them every time I finish a book. please don't ever stop writing. Thanks for all the stories with Joe and his amazing team of crime stoppers.

This hit the mark. Performance,story, all very polished and entertaining. No one is better at this series than Tom Taylorson. In my opinion one of the best, if not the best of the entire series.