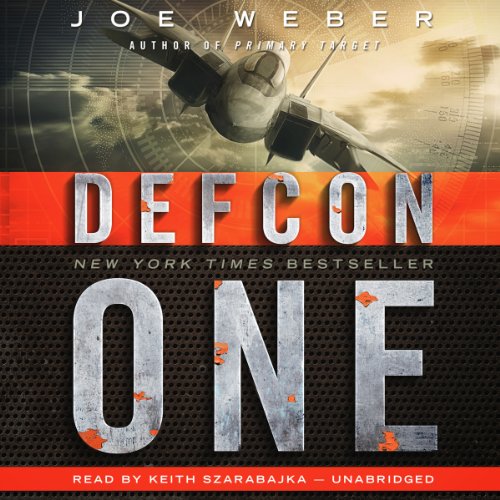 By: Joe Weber
Narrated by: Keith Szarabajka
Try for £0.00

In this explosive best seller, the United States and the Soviet Union are poised on the brink of Armageddon. Glasnost has failed, Russia is economically desperate, and Gorbachev's successor has launched the first strike in what may become World War III. Only one man knows the full extent of the impending horror - a CIA operative trapped in the Kremlin.

Written by a former Marine Corps pilot, DEFCON One is a blistering scenario of men and war - exciting, tense, and frighteningly real.

What listeners say about DEFCON One

I’ve no idea if the book is any good or not because I couldn’t listen beyond the first 20 minutes due to utterly painful narration.

A weak story that lacked imagination in my opinion. I also didn't like the narration. . Just not for me.

I have not heard Joe Weber before this story. I found it to be very scarily plausible. Lots of tension that left me desperate to hear what happened next.

Action packed all the way throughout. Good characters and believable situations all brought together with one of the best narrators I’ve heard. Really enjoyed this book.

A gripping thriller, thought provoking and terrifying. Well researched. A page turner which I thoroughly enjoyed.

A good storyline bringing together a number of parallel narratives, only slightly let dow by a rushed sounding performance

loved it... excellent... This story kept me on the edge of my seat all the way through. Found it hard to put down.

This book was a great listen. Very factual and with a great story. I really enjoyed it and will move onto the test of the series.

So well read, kept me gripped from start to finish. A believable story, especially in this day and age .

The reader is so bad!

The reader's breathing is so loud it wreaked the book for me. Gave up on chapter 3.

The narrator is breathing like he is running a marathon. I can't listen to it anymore!

I wanted to enjoy this book, I even finished it though I couldn't explain why.

The basic premise, that the Soviet Union elected to embark on a nuclear strike rather than concede the cold war I thought had some potential. Unfortunately a good idea isn't enough.

This is really not good writing, actually the more you think about it, the worse you have to admit the writing is.

The characters, well character is probably too strong a word, the dialog, best not mentioned, even the plot execution was pretty disjointed.

Sometimes a gifted narrator can rescue some pretty average story telling, this is not one of those times. This narrator may work for some pretty specific books but here, he was as bad as the book and at least in this case, two negatives most definitely didn't make a positive.

If you do find yourself part way through the book and are hoping it gets better, um, it doesn't.

I had always thought I could happily read some pretty trashy ridiculous light books, it seems I have limits.

You have to look deeper at this one...

It takes a while to get used to the narrator and the story. But in the end, this is a must read if you want insight into human behavior and the tenuous nature of our existence. It takes one person to change humanity. Even though this book was written in 1989 the message is relevant, and the action will keep you listening. It can make you think if you let it.

I love Tom Clancy books even though they can get a little too detailed but this book was just too much. Or it could be the fact the narrator was literally just reading. Not good character voices or acting.

It's really amazing what a great narrator can do with a book. Keith is that narrator. I think if Keith had narrated the other Joe Weber books they would have had better reviews

The gruff voice led to poor narration. It was impossible to follow the characters as there was Very Little difference in all of the characters voices.Simply Not a Good Voice for multiple characters,to many Marlboros

Let’s bring the US to the brink of war so awe can attempt a surprise nuclear attack.

How about just surprising the US with a nuclear attack.

Narrator killed this for me

I could not listed to this book past chapter three. The narrator sounds like he is on a respirator and is very distracting.

There is no more Soviet Union, and most of the weapon systems mentioned in the story are obsolete and retired. China as a military power is not mentioned. But 40 years ago the plot would be plausible. The world has changed.

Warning! Once you start listening, the rest of your day will be gone, and most of the night.