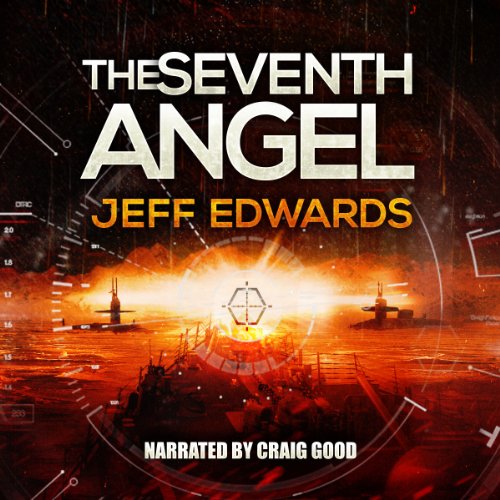 By: Jeff Edwards
Narrated by: Craig Good
Try for £0.00

The world has forgotten the true nature of terror. It's about to be reminded.

A military revolt in southeastern Russia puts a former hard-line Soviet leader in command of a ballistic missile submarine and its arsenal of nuclear weapons. His goal: re-ignite the communist revolution, and recapture the might and glory of the fallen Soviet Union. Without warning, Russia, Japan, and the United States become hostages in a scheme of international nuclear blackmail. When the warheads start falling and people begin dying, no one can pretend that it's a bluff.

As the earth rushes toward extinction, a lone U.S. Navy warship must penetrate the Siberian ice pack to destroy the submarine before it can destroy the world.

It may already be too late.

What listeners say about The Seventh Angel

The Seventh Angel is a techno thriller based on the premise that a local governor in one of the Russian provinces decides to try to reincarnate the Soviet Empire. He has control over at least one missile firing submarine with nuclear weapons and uses those missiles to hold both the Russian and American governments at bay by threatening to use, and then using, those weapons.

The idea of a madman threatening to use, or using, nuclear weapons is a staple of many current day thrillers, but several things set this book apart from its contemporaries. First, the characters in the book feel real and their actions, both good and bad, seem like those that real life people might take. The book does not present us with caricatures, but with real people. Second, the actions taken by those in power to try to address a madman with nuclear weapons also feel like those that might realistically take place, given the situation. Third, the description of the software problems that cause some of the issues in the story are true-to-life and the author properly and clearly presents the concepts of software bugs, work-arounds and how difficult it can be to find root causes of software malfunctions. All in all the book presents a story that feels completely real and possible in today’s world. The writing is first class, there is a constant feel of tension throughout the book and nothing in the book feels artificial or contrived. In fact the action near the end of the book, when the governor decides to teach the US a lesson, stands apart from almost every other thriller I have read in having the feeling of how things really work out.

One other thing that should be mentioned is that there are no Rambos or James Bonds in this book. The actions that are taken are taken by normal people doing their best in a bad situation. That restriction is one of the most compelling things about this book. Normal people, with their own prejudices, strengths and weaknesses, are tying to deal with an extraordinary situation and their successes and failures seem as real and lifelike as can be in a novel.

The book starts with a recurring nightmare one of the characters is having and I wondered if that nightmare was about another story in another Jeff Edwards book involving the same character. I did a search through the Audible offerings and found only one other Jeff Edwards book which, based on the synopsis, had no relationship to this book. I then checked the Amazon offerings and found two additional Jeff Edwards books, in Kindle format, and believe that those books offer a back story to the present book. I was so captivated by this book that I thought I might buy the earlier books, in Kindle format, and read them. This book is that good.

Craig Good does an excellent job in narrating this book and he kept my interest throughout. I found no technical issues in listening and the story was so interesting that I finished way too quickly. If Audible made any of the earlier Jeff Edwards books available (and if I have not already read them in Kindle or print form) I would buy them without question. I personally felt that this book was perhaps the best techno thriller I have read since Tom Clancy’s early books and felt it was as good as The Hunt For Red October and Red Storm Rising. I am happy to recommend this book to those interested in techno thrillers.

Where does The Seventh Angel rank among all the audiobooks you’ve listened to so far?

I listened to Mr. Edwards first novel Torpedo and fell in love with his storytelling. The Seventh Angel continues his wonderful storytelling abilities. This book has more suspense than the first in my opinion. I look forward to his next. Thank you Mr. Edwards!

What was one of the most memorable moments of The Seventh Angel?

The epilogue brought it all home for me.

Yes. Luckily I have almost 2 hours a day to listen.

Well written and narrated. I had to stick with it until the end. Looking forward to the next in the series.

I was hooked from the beginning to the end. Although I was already a fan of Jeff Edward's and this genre, this story renewed my interest exponentially.

The narration by Craig Good was first class. I'll be looking and listening for more of his work.

The character development was so realistic that I could visualize each character as though I knew them personally. It's difficult for me to select any one person as a favorite because of their realism; I'd lock onto different traits of the cast at different action points of the story.

The story itself was fast-paced and very realistic. The timing of the story corrolated with many of the world events going on today. I found it difficult to take a break from the story as I didn't want to miss anything. I guess you could say I was hooked!

As I mentioned, this was a really great listen and the best use of 1 credit that I can recall. Do yourself a favor and do not miss this action-packed thriller. I'm on to the next Jeff Edward's audiobook.

This was a great story. First time I have listened to Jeff Edwards. He is a fine author. The narration was very good also, the story flowed well. I highly recommend this book. I will listen to more of Jeff 's books.

I hope Edwards is at his keyboard now, pounding out another intelligent, topical, and exciting novel. I’m grateful for his presence especially in this genre and cannot thank him enough for an intelligent, informative, and satisfying novel. An outstanding narrator as well! What a great experience.

Almost had to bail

While this narrator has a nice voice, he doesn't have characters. This felt more like a textbook reading and definitely diminished the enjoyment of the book. As to the book, the premise was OK but nothing about it made me want to pursue this author's next book.

Good story of brilliant characters in tough situations . The author does seem to know what he is writing about. If this event ever does occur, it may follow this storyline.