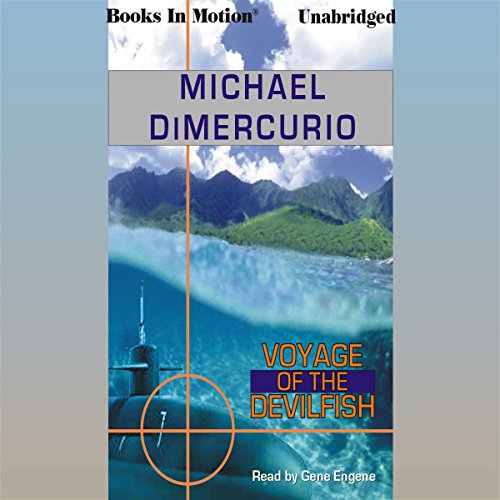 Voyage of the Devilfish

By: Michael DiMercurio
Narrated by: Gene Engene
Try for £0.00

A confrontation of nuclear submarines just 200 miles off the American coast is the scenario of this riveting novel by a former U.S. Navy submarine officer. At the center of the deadly conflict are two men on a mission: one wants to find his father's killer, while the other wants to destroy Glasnost and provoke a war. The ensuing underwater chases and battles build to a stunning showdown.
©1992 Michael DiMercurio (P)2007 Books in Motion
Action & Adventure Espionage Technothrillers
Show More Show Less

What listeners say about Voyage of the Devilfish

worst narrator ever, and I've heard some shockers

story was good, the narrator was terrible. really struggled to get through it because of his terrible accents

1st thing that explodes in this book is the HORRIBLE ATTEMPT of the narrator to identify each character with a voice that a mother couldn't even love!!! OMG did they not hear this guy before putting the book on audible??? The narrator has a good voice while he isn't in character but you must plug your ears when he is!!! I really don't think I'll be able to stomach the rest of the book!!! He will kill the sale of this book.

This is a new author for me. I understand it is his first book. The book is an exciting techno-thriller. Our protagonist is Cmdr. Michael Pacino who is the captain of the attack sub Devilfish. Michael’s father was also a sub captain. As he leaves on his new assignment, Michael finds out that the Admiral aboard the new Russian submarine he is to track sank his father’s sub twenty years ago.

The new Russian super-submarine, the Kaliningrad, is superior to the U.S. submarines. Admiral Alexei Novskoyy plans a nuclear strike on the United States. He has gone rouge. Apparently, the Russians have a mole high up in the Pentagon. The suspense is palatable as the two submarines play hide and seek under the polar ice while Russian submarines line up along the United States eastern shores to launch nuclear missiles.

The book is well written with lots of action and suspense. The plot twists and turns. The characters are interesting and realistic. Apparently, the author was a former submarine officer and drawing on the experiences, DiMercurio makes the life and action on the submarine extremely realistic. I am definitely looking forward to reading more books by this author.

The book is just over twelve hours long. Gene Engene does an average job narrating the book. I first enjoyed Engene when he was the narrator for the Beaumont books by J. A. Jance. I think that Engene has the perfect voice for westerns. This is my first experience with him reading a submarine book. He does an average job with this book. This experience only re-enforces my view that he is superb as a western narrator.

When telling a tale on audio you must make it believable and that means bringing characters to life. Gene Engene somehow turns every sailor into a parody of a southern ‘hick’ and every opponent into a knuckle dragging thug. America is rich in regional accents, as is Russia but the characters in this read are come across as simpletons. The real US and Russian submarine fleets must be made up of smart, well trained and responsible people so why of why make them sound so stupid? It turns a tale woven with technical information into a comic. Michael DiMercurio should get this re-read for the book deserves better treatment.

The book was only a three star to start with but the narrator is just horrendous. It is like listening to a bad imitation of William Shatner doing a parody of his James Kirk character. About every third word is over emphasized and his character voices are just a bad joke.
As for the book, it is highly predictable and rife with errors. I listened but never really enjoyed the book.

Good story, but do we really need those details?

Overall I liked the story, but in some places the intense detail gets so involved it slows the story down. Slight spoiler warning here - in one post an explosion affects two subs and when this happens I really don't think we needed the millisecond by millisecond detail on exactly how each man in each one of the subs was affected. Which men had which bones broken and/or organs punctured and in what order. It's 30 minutes or more of read time just listing the gory details and it's just sad that by the end of it I no longer care who's dead - I'm just praying we can get on to finding out what will happen after the explosion.

Might or might not go on to the next book in the series, going to have to think about it & hope the next one can keep the story going without getting bogged down with excessive & unnecessary detail.

I just couldn't get over how fake everything is. The ship classes, some physics issues, etc.

Great story with a lot of action. The only problem I had was with the narrator! He did a very credible job but needs to work a lot on his characters voices. Some were completely annoying and made it very difficult to listen to.

I enjoyed the story and the narrator. I soon learned to recognize the different voices and what character they belonged to. Learned a lot about onboard nuclear power plants. My only complaint is very minor and directed at the author. American submarines are called “boats”, not ships.

This could (and indeed might) be an interesting story, but the utter garbage-tier narrator really took me out of it. Without exaggeration this is the worst performance I've ever heard; the narrator can't seem to figure out a regular cadence or consistent accent/voice to save his life. Hugely disappointing as again this had the potential to be decent.