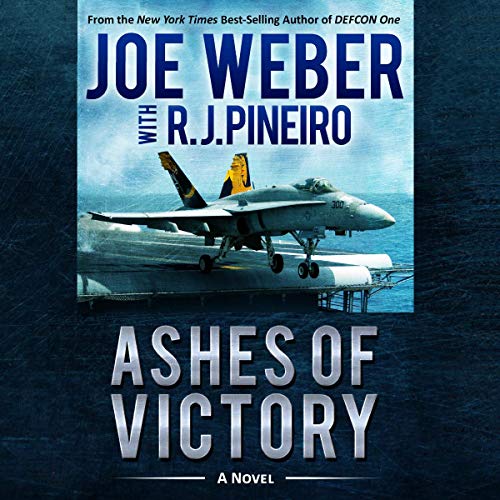 By: Joe Weber,R.J. Pineiro
Narrated by: George Newbern
Try for £0.00

From the New York Times best-selling author of DEFCON One, Joe Weber, and R. J. Pineiro, the acclaimed author of Without Mercy, comes a new novel of global terrorism and international conflict.

The unthinkable has happened. The United States is under attack. From the sea and the sky, the devastating attacks come, crippling the US military's ability to respond. Thousands have been killed and injured.

For President Cord Macklin, this is the greatest challenge of his life. Greater than risking his life in the skies over Vietnam and greater than guiding the country through some of the most trying times in its history. But none has been more trying than this.

Below the sea, a predator stalks the pride of America's Navy: its aircraft carriers. Deadly and silent, this killer seems able to elude all efforts to find it.

In the skies over the Pacific, a belligerent China flexes its muscles, seeing an opportunity to exploit America's sudden vulnerability. As Chinese and American fighters play a deadly game of chicken, high above the US fleet, one wrong move could plunge the world into war.

Behind all of it, a Saudi prince and a rogue Chinese general pull the strings of their many puppets, acting in concert to achieve their joint goal: the crippling of the United States of America.

Yet the greatest threat remains to be seen. Can the president and his cabinet defuse the situation? Can a top-secret team of spies and Navy SEALs find and stop the perpetrators before the very balance of global power shifts?

From Asia to the Middle East, America finds herself at war, stretched thinner than she has ever been.

What listeners say about Ashes of Victory

Lots of detail about military operations, the authors really know the subject. Often feels it's over detailed but it was very appealing to me.
The politics and international diplomacy felt very believable.

A cracking yarn, and the narrator did a pretty good job. “Deedle-Deedle!” is perhaps the strangest catchphrase in modern literature. And the president seemed a pretty decent guy.

Great story and a good performance. I must have downloaded the children's version by accident as some explatives are edited out. Very annoying. Some of the editing is very choppy and poorly done. Sounds very DYI.

Lots of action but all unrelated

This nook goes in multiple dirtat the same time. All to uncover a China plot. Not tightly written and not worth a credy

Excellent technical information along with a compelling story. Could not stop listening to this book. I hope the next book is just as good.

Joe Webber does it again

Joe Webber is and awesome writer. Excellent knowledge of military hardware and world events. The performance was excellent.

We only hadThat kind of ballsResiding at 16:00 Pennsylvania Avenue. No I long for the days of the greatest generationSo that was long before my Time . I've fought the good fight In more modern wars But I just wish we had the balls to finish The job the right way

Author knew what he was talking about what a great book star, kept you on the edge.

Pretty damn good not too wordy lots of details about weapons and their utilitization in combat either defense and offense. Plot moves well (I listened non stop from the first word to the very last in one day, when I cannot stop, I really love the book, either listening or reading!!!!

You have to pay attention or go back. Well worth it if you have to go back to catch a name.

This was a masterfully written and narrated book. I appreciated the balance between strategic and tactical perspectives and the detailed technical military descriptions.

The author(s) also depicted and masterful understanding of Chinese cultural behavior as applied to the events in the book.

right at small wrong on the big

overly naive story , but correct display of air man and aircrew, basic info got wrong like range of aim9 , completely wrong understanding about a opponent tactic...which can only be explained as laziness