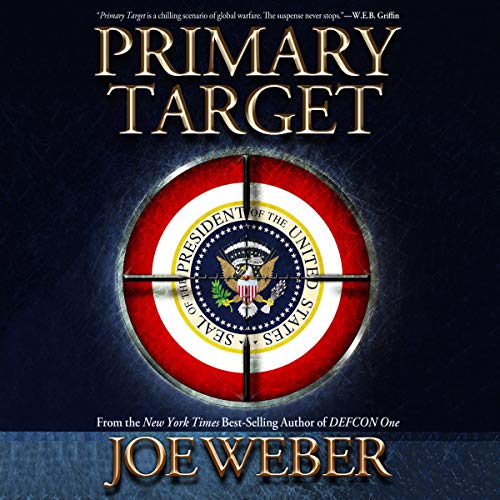 By: Joe Weber
Narrated by: Alexander Cendese
Try for £0.00

“Weber weaves a frighteningly real story of international terrorism in America in his newest thriller.”—Publishers Weekly

As the once-powerful Soviet Union descends into social and economic collapse, a group of hard-line communists has devised a strategy to return their country to its former glory. In league with the most ruthless militant extremists of the Middle East, they hatch a plot to eliminate the one person with the power to stop them: the President of the United States.

This time, America isn’t declaring a war against terrorism. The terrorists are declaring war on America....

“Weber colors his novel with numerous subplots, well-developed characters and historical references to Operation Desert Storm and the Iranian hostage crisis. His knowledge of weapons, military aircraft and terrorist tactics is superior, and a surprise ending teases readers with the tempting possibility....”—Publishers Weekly

“Some writers get better with age: Weber is among them.”—Library Journal

What listeners say about Primary Target

As a former 23 Red Devil and VMFA Skyhawk maintainer I loved the USMC involvement, although somehow wanting the A-4 to be shot or destroyed. Nice story with the dbl twist of apparent bad guy, good guy, really bad guy was dIfferent. Heroes are great.

Good story with accurate aviation detail... only downside was the female voice over- sounded too naive school-girl. I’m sure doing a female voice is hard for a male, so perhaps have a female read the part, or refine the voice. That was the only distraction, otherwise entertaining.

All you need to know about flying aircraft

This was OK, enjoyable enough. There is definitely a freshman quality to the story. It was more simple, less nuanced than others in this genre, but I still think it worthy of the listen. There was a lack of character build and some of the action just seemed to develop too quickly when more explanation may have been needed to flesh out the story.
As for explanations though, this guy loves his flying machines and will tell you all about it in through this story. Sometimes I felt more like this was a glorified narration of a video game.

One thing that was actually refreshing is that there was palpable damage on both sides of the conflict. In war, people die and he did not make one side (usually the heroic US) come out unscathed.

The reader is not my favorite, but again, he may work his way up to the level of Dick Hill or Scott Brick.
For the author and the narration, you have to start somewhere.

So, I recently had the good fortune to gain some rudimentary lessons in aviation and to visit an air traffic control tower. That experience greatly enhances my reading experience with this novel. I read a lot of spy thrillers, but this one has got to be the most hazardous ever! No one gets a break. People die en masse all over the place. It’s so unlikely! Yet, despite the credibility issue and the highly technical stuff, the book is so compelling! Of course, it’s a race to see if the heroes will get their man and the good ole’ USA will win the fight! But what a fight!
Page turner for sure.

Can't finish. narrator awful. poor character development. plot has been done to death and better by others.

Has some exciting moments, but could have been much better. Jumps around and is somewhat disjointed.

kinda far fetched...ending was poor. I'd be willing to read the follow up to this book though

Loved this book!!! Would recommend it to anyone. It flowed easily. The narrator was easy to listen too.

storyline hard to keep up with.