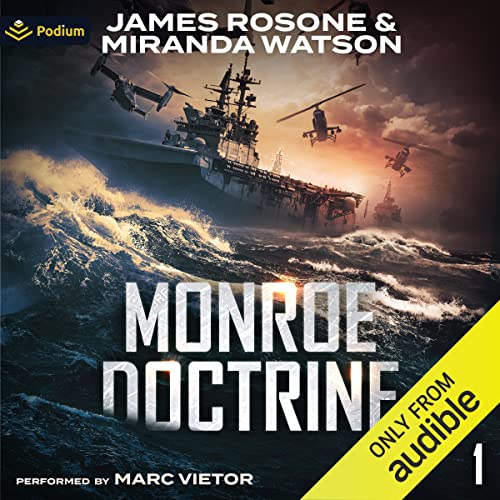 By: James Rosone,Miranda Watson
Narrated by: Marc Vietor
Try for £0.00

It was called Jade Dragon…and it threatened to destroy the West.

Was an attack on the US imminent?

In a lab deep in the heart of China, a brilliant engineer had a breakthrough. It was the most powerful AI ever created. Ma Young believed the Jade Dragon could combat the world’s most dire challenges. There was just one problem...the president of China had other ideas. Was this their chance to conquer?

The war began at the speed of light. The entire NATO alliance stood on the brink of destruction. Cyber attacks, deepfakes, and a wave of social media disinformation wrought fear and desperation across the globe. The sleeping giant was awake. Could Ma stop his creation?

What listeners say about Monroe Doctrine: Volume I

What a start to a series - Five stars

Looking forward to the rest of series.

Could not put it down.

I could not stop listening to the book, the narrator keeps you in the story. If your into military fiction this book is for you.

Very fast paced and gripping from outset. Good mix of narrative and battle scenes and a need to keep listening to see what happens next.

Full of depth and detail. Makes you wonder just how much of James and Miranda’s subject matter is actually going on within governments and the military and corporate conglomerates! Also, great characters and performances in all of they’re works! Kudos!

Listened to this in two days. A bit slow at the start, but the final 3-4 hours are literal page turners.

Can’t wait for the next book to become available.

Being prior Military I can tell the accuracy of this book and how the events could come about , so it's scary good , really impressive

The book was good and quite well written but they appear to have broken into 2 volumes for marketing ($$$) rather than facilitating the story. It’s just getting into the meat and they just stop… with an immediate sales pitch for the next one.

I’ve read many series that I don’t mind buying multiple books, but each wraps up a story in one volume, often twice this book’s length.

I love it! Well thought out. I like all the characters.
When is the next book coming out? Hurry!

I found this book to be borderline racist

This book is so anti Chinese, I found it to be quite offensive. It appears that the US can do no wrong and that the Chinese can do no 'right/ This is propaganda and I am very disturbed about it. It encourages and reinforces the massive propaganda campaign by the US to denigrate anything Chinese Audible should have a segment or category 'US Propaganda'

the story mechanics have been studied

The story is more a clear picture of where we are without the Russians being involved.

These guys do a fantastic job of creating a huge living reality, while making sure it all holds up to real world truths. The time and dedication to reality is as important as the fantastical, exciting, terrifying, and immersive story and characters. If you love grand drama on a geo political scale that cares as much about the big picture as the individual, give these guys a try. You won't be disappointed or able to put the books down.