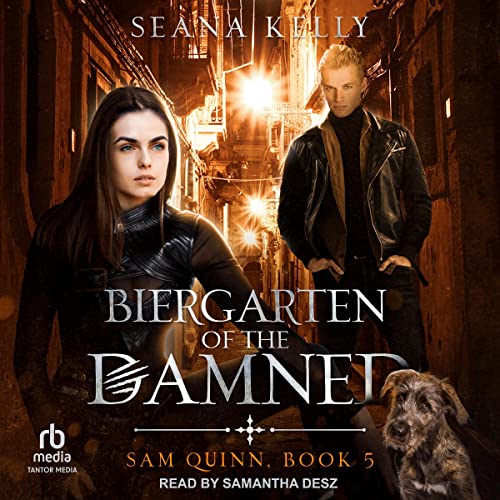 Biergarten of the Damned

By: Seana Kelly
Narrated by: Samantha Desz
Try for £0.00

I'm Sam, the werewolf book nerd owner of The Slaughtered Lamb Bookstore & Bar. I've always thought of Dave, my red-skinned, shark-eyed, half-demon cook, as a kind of foul-mouthed uncle, one occasionally given to bouts of uncontrolled anger.

Something's going on, though. He's acting strangely, hiding things. When I asked what was wrong, he blew me off and told me to quit bugging him. That's normal enough. What's not is his missing work. Ever. Other demons are appearing in the bar, looking for him. I'm getting worried, and his banshee girlfriend Maggie isn't answering my calls.

Demons terrify me. I do NOT want to go into any demon bars looking for Dave, but he's my family, sort of. I need to try to help, whether he wants me to or not. When I finally learn the truth, though . . . I'm not sure I can ever look at him again, let alone have him work for me. Are there limits to forgiveness? I think there might be.

What listeners say about Biergarten of the Damned

I’m really getting into this series! The characters are really starting to come alive for me!!

These books are full of adventure, wit, great characters, and heart. The writing is well constructed- no silly cliches or sloppy turns of phrase. Wish it could go on and on.

I just LOVE all the character development! Dave's story was suprising and awesome! Well done!!

So absorbing and imaginative!

Let us take a moment to appreciate the title of this book. Even if I didn't know that it contained some of my favorite urban fantasy characters, I would want to read it from the title alone. Add in the wonderful characters, compelling story, and a puppy? Well, not only did I love it, but I want everyone to run out and read this, along with the other books in the series. Not that this requires the other books to be enjoyed, but they make the story so much richer. I have been lucky enough to listen to the audiobooks, perfectly narrated by Samantha Desz. 5 stars, all around!

I only wish all of the Sam Quinn books were longer! Now I have to wait another year before the next installment comes out! Arrrgggggg!!!

I can't wait until the next book. The Sam Quinn series is so good---from the writing to the narration it is 10/5 !!!

I can't wait for books 6 and beyond.

Only disappointment is story length, wish there was more. But great series, I would purchase again.