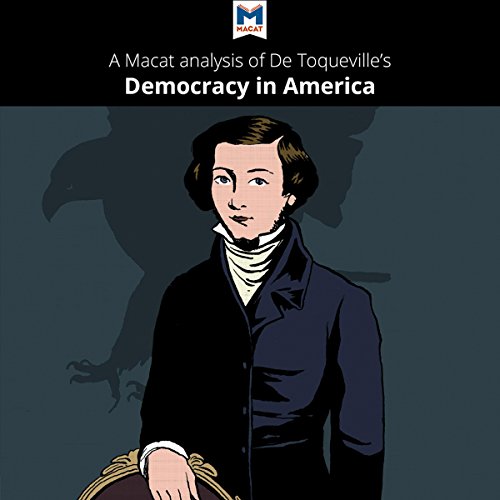 A Macat Analysis of Alexis De Tocqueville's Democracy in America

By: Elizabeth Morrow
Narrated by: Macat.com
Try for £0.00

A Macat analysis of Alexis De Tocqueville's Democracy in America.

Alexis de Tocqueville's Democracy in America, published in two volumes in 1835 and 1840, challenged conventional thinking about democracy when it appeared - and is still cited by leading politicians today.

Having witnessed some negative effects of democratic revolutions in his native France, Tocqueville visited America in 1831 to see what a functioning republic looked like. His main concerns were that democracy could make people too dependent on the state and that minority voices might not be heard - a problem he termed "The Tyranny of the Majority." By examining America thoroughly, Tocqueville hoped to show how a democratic system could avoid these pitfalls.

Tocqueville also made a number of accurate predictions about the future of the United States, anticipating that the debate over abolishing slavery would cause conflict and that the US and Russia would emerge as the world's two great powers.

The New York Times decided: "No better study of a nation's institutions and culture than Tocqueville's Democracy in America has ever been written by a foreign observer."

You can find out more about how Tocqueville's ideas have been challenged and applied - and how his work has impacted on thinkers in other academic disciplines - by exploring further in the Macat Library.

The Narrator is absolutely horrible. Tocqueville’s political concepts and ideas are summarized and read by what sounds like the most sarcastic kindergarten teacher ever. The narrator stumbles through complex and profound political questions with what seems to be wry rhetorical inflections and winking condescension. Half way through I began to wonder she was actually mocking the listener for having an interest in the subject matter.

I want my time back

Way too many words for the information actually transmitted. Simplistic, repetitive. The message of the entire book could have been stated on maybe two note cards. Small ones.