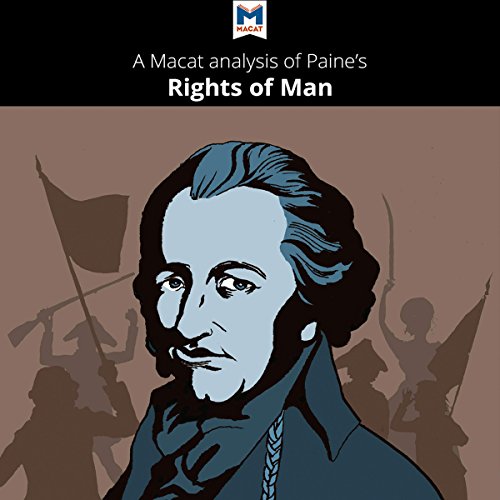 A Macat Analysis of Thomas Paine's The Rights of Man

A Macat analysis of Thomas Paine's The Rights of Man.

British-born American political activist Thomas Paine wrote Rights of Man in 1791 in response to Reflections on the Revolution in France, Edmund Burke's attack on the French Revolution. Burke was wary of tearing down old institutions of government. But Paine argued that revolution is acceptable - in fact, necessary - when government ignores the rights of its people. Not surprisingly, Rights of Man proved very popular in the newly liberated United States, selling over 100,000 copies. In England, though, Paine was convicted (in his absence) of writing to incite a popular uprising.

The 31 essays collected in Rights of Man argue passionately that people have the right to overthrow an illegitimate government. Drawing on notions of universal human rights and the advantages of representation, Paine also claims that citizens have the right to create new governments themselves.

Rights of Man has played a major part in shaping many of the freedoms and institutions we see today, and its influence has resonated for more than two centuries.

You can find out more about how Thomas Paine's ideas have been challenged and applied - and how his work has impacted on thinkers in other academic disciplines - by exploring further in the Macat Library.

A Clear Abstract On Works Of Thomas Paine

In preparation to reading on Paine I found this presentation a wonderful guide to moving forward on my study of him. It fits very well into reading about the French Revolution as I am now doing.