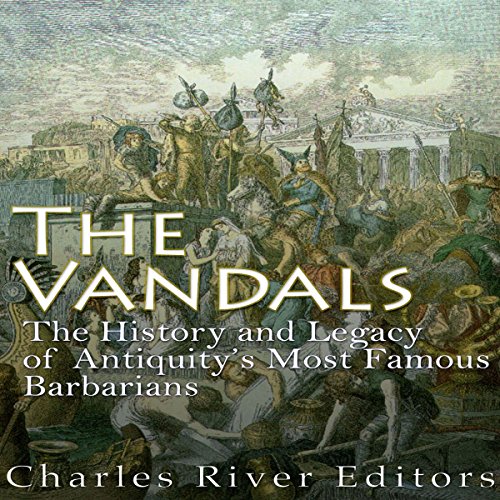 Today, most people are familiar with the term "vandalism", but are ignorant as to the word's etymology. Yes, vandalism refers to the wanton destruction of property in the modern world, but the word's origin is much more complex, as it was originally the name of an important Germanic tribe that flourished in Europe and North Africa in the fifth and sixth centuries AD. As the Vandals rampaged throughout Western Europe and later into North Africa, they left a swath of destruction in their wake, which is how the term "vandalism" became associated with destruction. The Vandals were a truly ferocious band of people who used the art of war to achieve their goals in ways that seem cruel and barbaric to modern sensibilities, but it was just one of many groups of people at the time who employed these tactics to seize power and land throughout Europe and the Mediterranean region. An examination of the Vandals through a combination of Latin language Catholic Church sources and Byzantine chroniclers, combined with studies by modern historians, reveals that the Vandals were much more than bloodthirsty barbarians whose primary goal was the destruction of Rome.

It is true that the Vandals sacked Rome in AD 455, but even that act was a unique historical accomplishment in itself as they were only the third people to inflict such destruction on one of the world's greatest cities. Despite living on the lawless marchlands of the Roman Empire, the Vandals were able to establish two different kingdoms, and introduce a fairly complicated code of royal succession, that gave stability to their people for some time. The Vandals also proved to be an extremely clever people in their use of violence and war, as they rarely engaged in violence for its own sake. They also often employed clever tactics on the battlefield to defeat the larger and more sophisticated armies of the Romans, and later, the Byzantines. The examination will also reveal that the Vandals were as adept at the arts of diplomacy and statecraft as they were with warfare. If they could obtain an advantage through negotiation, then they would choose that route over a war that threatened to decimate their forces. Despite having the image of the cruel barbarian warrior, the Vandals were not without God in their lives. Although the Vandals were Christians, they followed a different sect of Christianity, which often put them at odds with Rome and Constantinople, but throughout most of their history they stood fast to their theological beliefs. The bloodthirsty reputation accompanying the Vandals throughout the centuries has largely been the result of their theological beliefs that diverged from the orthodoxies practiced during the period by the church leaders in Rome and Constantinople. Though the Vandal culture was truly as important as any other in Europe and the Mediterranean region at the time, as was the case with many of the Germanic tribes that lived on the fringes of Rome, the Vandals were destined to find themselves the victims of the nascent Byzantine Empire in the end.

The Vandals: The History and Legacy of Antiquity's Most Famous Barbarians looks at the history of the "barbarians" who brought Rome to its knees in the late fifth century and helped bring about the final collapse of the Roman Empire.

What listeners say about The Vandals

Good introduction to the Vandals

This book is an excellent springboard for further research and studies into this interesting ancient people.