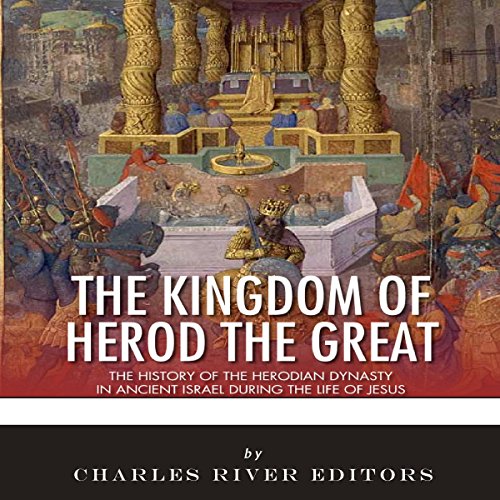 The Kingdom of Herod the Great

By: Charles River Editors
Narrated by: David Zarbock
Try for £0.00

Herod is one of the more well-known characters of the Bible, as even those with a limited knowledge of the Bible will recognize the name and maybe have some idea of who Herod was. One of the most popular stories, known even to non-Christians, is Herod's slaying of the Innocents, a gruesome part of the Christmas story. Others who may know a little bit more about the Bible will know of the accounts of Herod and John the Baptist, Herod and Jesus, Herod who was eaten by worms and maybe even Herod and Paul.

Although Herod doesn't appear in the Bible very often, it appears at critical junctures in New Testament history, and a casual reader of the Bible might incorrectly assume that each time the name "Herod" is mentioned, the Bible is referring to the same person. In fact, there were actually six different people in the New Testament who were part of this dynasty of Herods. From before the birth of Christ until the destruction of Jerusalem, the Herodian Dynasty was the ruling family in Palestine.

The family of Herod came from Idumea, so they were considered by some Jews to not be qualified to sit on the throne of David in Jerusalem. However, the close connections of the family with the current Roman emperors and those who were to become emperors kept them in power for almost 100 years. The dynasty started with a celebrated war hero and ended with strong rumors of an incestuous relationship between brother and sister. The power struggles among the aristocracy and the discontent of the populace also characterized the political scene behind the events of New Testament Palestine.

What listeners say about The Kingdom of Herod the Great

Interesting; informative, and easy to follow. David's narration was clear enough to understand even at 1.5x speed. Great book for a quick study.

The Kingdom of Her or the Great.

I really enjoyed the book. I learned several points. This book helped fill in several gap.

interesting Story of King Herod
Thought it was well written and read!
Based off of Historical account!

Covers the major points, no nonsense

I appreciated the economy of this biography. I wanted something that gave me an overview, and this filter that I need. It moved very fast and I had to rewind it several times. I suggest listening on a slow speed. I will probably go back and listen to it again while making a family tree And paper dolls and taking notes, to keep up with this crazy dynasty.