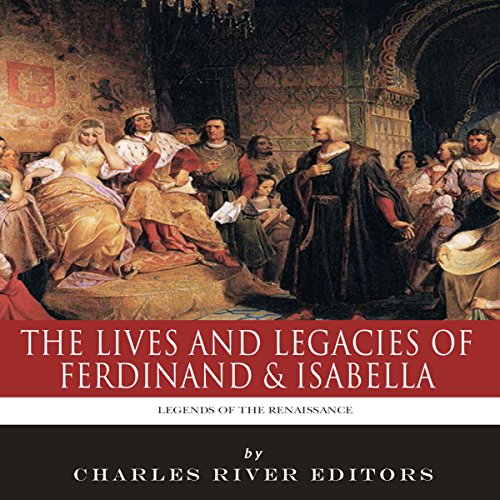 Legends of the Renaissance: The Lives and Legacies of Ferdinand & Isabella

A lot of ink has been spilled covering the lives of history's most influential figures, but how much of the forest is lost for the trees? When historians are asked to pick a point in history when Western civilization was transformed and guided down the path to modernity, most of them point to the Renaissance. Indeed, the Renaissance revolutionized art, philosophy, religion, sciences and math, with individuals like Galileo, Leonardo, Michelangelo, Raphael, Dante, and Petrarch bridging the past and modern society. In Charles River Editors' Legends of the Renaissance, listeners can get caught up to speed on the lives of the most important men and women of the Renaissance in the time it takes to finish a commute, while learning interesting facts long forgotten or never known.

Isabella and Ferdinand of Spain, given the title the "most Catholic monarchs" by the Pope during their reign over Spain, are often blamed for some of the greatest atrocities in history. Remembered primarily for commissioning Christopher Columbus's historical voyage to the New World in 1492, they have been assigned blame for the results of the Spanish Conquest, particularly the catastrophes that befell the Native Americans of the New World. But their reign also had profound influences on the European continent, including the barbarity of the Spanish Inquisition and the expulsion of the Jews from Spain.

However, while the modern world finds it hard to look favorably on Ferdinand and Isabella, in their own time they were well-respected, admired, and even presented as a model for other monarchs.

What listeners say about Legends of the Renaissance: The Lives and Legacies of Ferdinand & Isabella