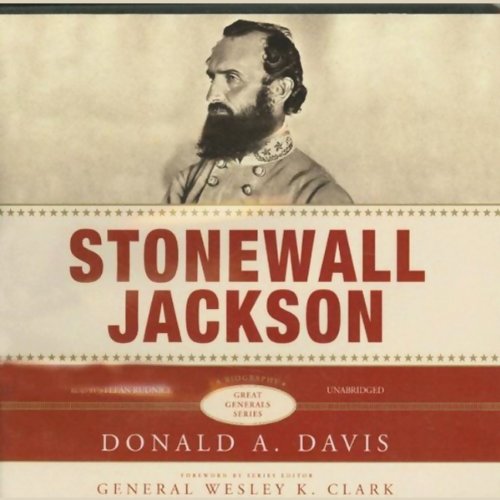 By: Donald A. Davis
Narrated by: Stefan Rudnicki
Try for £0.00

Deemed "irreplaceable" by Robert E. Lee, Stonewall Jackson assumed his nickname during the Battle of Bull Run in the Civil War. It is said that the Army of Northern Virginia never fully recovered from the loss of Jackson's leadership when he was accidentally shot by one of his own men and died in 1863.

Davis highlights Stonewall Jackson as a general who emphasized the importance of reliable information and early preparedness, who so believed in information that he had a personal mapmaker with him at all times, and he details Jackson's many lessons in strategy and leadership.

What listeners say about Stonewall Jackson

I really enjoyed this book. Gen Jackson was a very interesting man. His leadership and insight as a military commander was amazing. I would recommend this book.

This is a book about a war more than a biography of an individual, war books are boring. Civil war books and books about Stonewall Jackson's participation in it, are dozens. Although he was a masterful tactician, this book illustrates that with multiple battles--boring! It takes a map to keep up. As the book points out, there is little known about his childhood. Then, the author spends about a half hour talking about his time at the US Military Academy, Spanish American war and another half hour talking about his professorship at VMI. Good discussions, all. When Davis dives into the civil war, the book was only 25% finished. I knew that it would be a long slog to the end--5 hours or so. Davis doesn't apply the lessons learned earlier to his civil war service, very well; this book did little to contribute to my knowledge of the man. There was a bit of analysis at the end. The reader can skip over about five hours, right to that. While he was among the greatest tacticians the USA has ever seen, let us not forget, Thomas Jackson was a traitor to his country.

understanding the Generals of the Civil war

after lessoning to the books on how the war was fought my interest changed to wanting to understand the Generals, Lee, Grant, Jackson, Sherman, Johnson and Sharidon. How these men moved up and became the reasons why and how we fought this war. It was the Generals that made a battle be won or lost in the ability to stay or run.