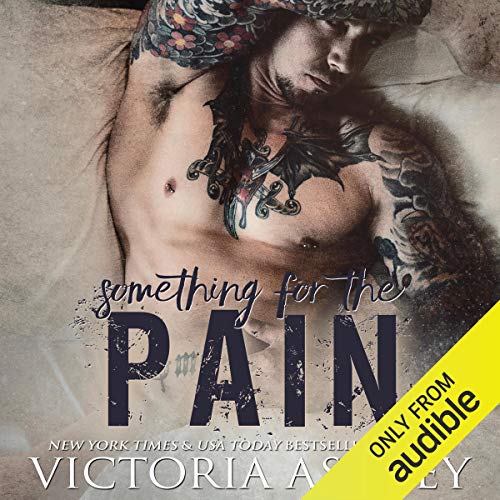 Something for the Pain

By: Victoria Ashley
Narrated by: Joe Arden,Maxine Mitchell
Try for £0.00

Tempting, inked, and highly addictive. Alex is all that and more....

I've made a lot of mistakes - ones I'm not proud of, and definitely ones that have left their marks both mentally and physically.

Things got lonely; I got lost in my own f--ked up mind and in the end it left me f--ked out of my mind and unable to fight - or at least win. That life's over for me and I've moved on.

Six months into tattooing at Blue's and already I'm the most wanted and sought-out tattooist. My biggest clientele consists of women. They come into the shop, end up in my bed, and we both come out happy. It's been my release since I've stopped fighting. It's become part of the "new" me. But when Tripp reappears in my life, I can't deny the fact that I would do anything for that girl.

So when she asks me to move in with her and her "boyfriend" - our other childhood friend - I never expected for things to get so f--ked up and twisted that I would find myself only more attracted to her by each passing second or wanting to protect her from everything that isn't me.

I have worked so hard over the years to suppress my feelings for her but when I find out that her and Lucas have been having an open relationship, I have the strong urge to rip his heart straight from his chest - to destroy the very thing that keeps him breathing.

What I didn't expect was for Lucas to ask what he did. For him to ask me to do the one thing I have secretly longed for since I was old enough to know what the need was. The second thing I never expected was the look of need that I saw in Tripp's eyes when he asked.

One night of free passion could change our lives forever. I never said that was a good thing either....

What listeners say about Something for the Pain

Alex & Tripp will leave a impression on your heart

What made the experience of listening to Something for the Pain the most enjoyable?

Feeling all of the love and emotion from the couple.

I loved when Alex and Tripp put their guards down and followed their hearts.

What about Joe Arden and Maxine Mitchell ’s performance did you like?

The really made the story flow well and gave it a added depth.

YES! Alex and Tripp left you wanting more and more!

The story was over all exciting and kept me wanting to keep listening. The performance by the narrators was not my favorite. I feel like their voices didn’t match up with the characters. Otherwise it was a good book.

This is a Firecracker

Loved this audible. Joe Arden and Maxine Mitchell told Alex and Tripps story well. Loved their voices, they were believable for the background of this story and their voices were great to listen to. I found myself swept away listening to them. I love all things Victoria Ashley so I knew I would love the story which I did. This is book 2 in the Pain Series and we get to learn Alex Carters story, Memphis's little brother from Get Off On The Pain, which is also fantastic. Alex and Tripp have been best friends for practically their entire lives and they love each other. What they find is they are also "In Love" with each other and both are afraid of losing their friendship so they choose to keep their feelings to themselves. Life has other plans for these two though. I highly recommend this audible book. Great story and narrated well.

Victoria was a new author for me to discover. I have enjoyed listening to Joe and Maxine for a long time so I knew this was going to be a perfect listen.

A love for the Ages

Something for the Pain is a beautiful love story. Don’t let some of the reviews or the description scare you, this is a love story for the ages. A bit of kink? Yes. Naughty, you bet! Deep, riveting and complex? Absolutely. I don’t do spoilers so let me just say that once you get into the story, you realize why Lucas (Tripp’s boyfriend) asks what he does of Alex, and the risk he took in asking. I have to say, I fell hard for Alex and Tripp. He is her everything and she is his. We should all have a love like theirs. This one checked off all the boxes for me and yes, it made me ugly cry. Well written with all the feels and fantastic narration, I’m glad I bought it and I will definitely listen again.

Took me a while to listen to this one and damn!!

🔥🔥🔥🔥🔥 talk about denying yourself what you know is true. Not a fan of all the awkward indecision, but whatevers, people lie to themselves all the time to validate their choices. I love Joe and Maxine together! ❤

When besties, since little kids - Tripp (h) & Alex (H), have been holding back their true feelings for well over a decade, you know when they finally get together it's going to be hot, intense, and sexy AF! This one def delivers. There is a ton of pent up tension between these "friends" and a lot of innuendoes as they have no boundaries because of the security in their friendship. This story starts at a slow simmer but quickly turns to high heat. 🥵 Phew. It's hot in here.
Here's the kicker: Tripp is in an open relationship and begs Alex to move in with her & her boyfriend, Lucas.
Joe Arden and Maxine Mitchell are a great duo and bring all the heat when telling this story.

The only way to describe this story is that is hot, hot, hot. Anything that Joe Arden narrates is an instant download for me. Maxine Mitchell is wonderful, per the usual. Looking for steamy scenes, a love story and a HEA, this book is for you.

I can't fault the narration - it's excellent. I just didn't connect with the story. Lots of repetition (good lord the excessive bottom lip biting). The main characters were just immature in many ways and I couldn't get into the alcohol sex party scene or the a**hole not-boyfriend or the reason Alex and Tripp were finally pushed together.