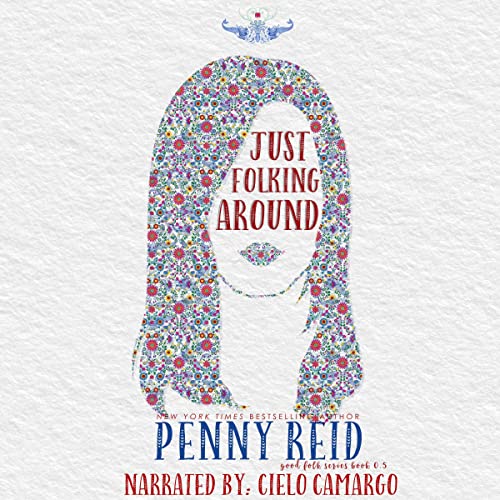 By: Penny Reid
Narrated by: Cielo Camargo
Try for £0.00

One night? No strings? A sexy game of chess? No problem.

If you've never read a Penny Reid book before, this is the place to start! An all new series starter snack from the author of the Winston Brothers and Knitting in the City series....

Raquel Ezra loves to fish. With so many fish in the sea, she’s never had a problem baiting the hook or reeling them in. Raquel is a good actress, she can be anyone’s fantasy for a single night as long as they agree to be hers. Which is why she doesn’t think twice about spending an evening in nowhere Tennessee with a smokin’ hot, well-mannered, and intriguing sheriff’s deputy by the name of Jackson James.

Except, when the time comes, Raquel discovers that reality might just be better than any fantasy, and maybe she’s not ready to release this catch.

Just Folking Around is a 16k words, contemporary romance, a complete stand-alone, and is the prequel to Totally Folked, Book 1 in the Good Folk: Modern Folktales series.

What listeners say about Just Folking Around

The narration is spot on

I love love love the narration, actors are perfect so happy to see them back! And the story was great but far too short

Fun seeing this side of Jackson, steamy little number! Anxious to see how the game of chess plays out… checkmate??

I was smiling the whole time with this story. Great narrator and building up story. I just wished it was a bit longer.

Hardly counts as even a short story. Heavy on the lewd and extremely short on plot.

Note that this is a 2 hour story before you waste a credit. What’s there is fine—there just wasn’t much of it.

I loved Penny Reid's the beard series and couldn't wait to read this one. It's like she wrote a couple of chapters and just quit mid story. I do see where there is a longer sequel to this but honestly she should have just made it one book. What she wrote was good it just felt very unfinished

I don’t get it

Voice narrator quality was fine, but they didn’t have much to work with. The character of Raquel is just.. meh. I honestly don’t feel any chemistry (and I’m 2 1/2 hours into Totally Folked now and feel the same way). I was mesmerized by the Winston brothers series and Green Valley depiction, but so far I am just not feeling this. The only thing I took out of this little prequel is that Jackson has an abnormally long tongue, and even that depiction here was just weird and not sexy. I know the character Raquel thought of herself as weird at times, but this whole thing was just awk-weird and didn’t flow. This won’t stop me from finishing the series, but I was happy to hear it was reduced from 7 to 3 books. Because if it’s more of the same, it’s going to be hard to finish. But please, oh please, try to not “Folk Up” Isaac’s book.

Super steamy (at times) but just plain fun! Definitely a lot of unanswered questions… which means it’s time to jump right into the next book in the series to get my answers.

This is only a sample. Do not waste money or a credit on it. Great story so just get the full book instead

Great little story but I don't appreciate not knowing it was a cliffhanger. This is just a tease.