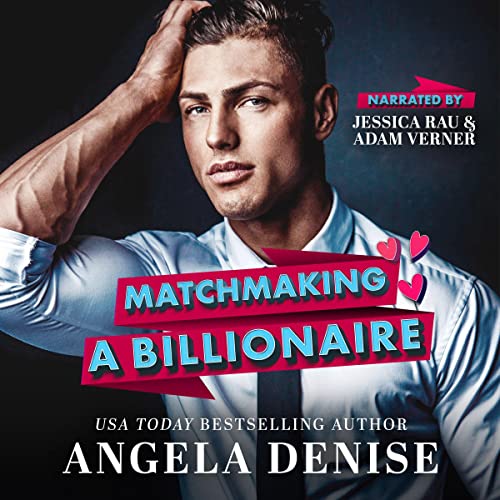 By: Angela Denise
Narrated by: Jessica Rau,Adam Verner
Try for £0.00

He’s everyone’s dream man but hers.

I used to believe in what we do at Mayberry Matchmakers, but now? Love is just another four-letter word.

Too bad my grandmother hasn’t gotten the memo. When tech billionaire Rory Byrne approaches us, wanting to develop the matchmaking app my sister and I dreamed up (and Nana shot down), she jumps at the chance. My grandmother is nothing if not opportunistic.

Of course, there’s a catch. She’ll only do it if Rory lets us matchmake him the old-fashioned way.

He’s going to say no.

Please God, let him say no.

The last thing I want to do is matchmake an entitled rich jerk...especially one who looks like sin and talks a good game.

I’ve screwed up in love a few times, but I never screw up in business. Mayberry Matchmakers has the idea for something amazing, and I have the money and the experience to make it come to life.

I should deny Nana Mayberry’s condition. If I let them matchmake me, it’ll be all over the news, and making headlines has never interested me…especially not after the personal betrayal that nearly broke me. But I’m having trouble caring about what I should do, because Bryn Mayberry is smart, snarky, and not the slightest bit impressed with me.

Actually, this may be Mayberry Matchmakers’ easiest job yet.

What listeners say about Matchmaking a Billionaire

Bryn runs Mayberry Matchmakers with her family but she doesn’t believe in love . Until she meets Rory who wants to make the app her and her Sister thought up . Bryn has to matchmaker Rory with 4 suitors but she’s falling for him can Rory feel the same about her . I really enjoyed listening to this and the narrators were perfect.

What a fantastic story this is. The Steam between Bryn and Rory surprised me 'kicking it up a notch." Adam and Jessica did a fabulous job bringing all of the characters to life. I highly recommend this audible.

HEA journey filled with all the emotions, the connections and the love

I really enjoyed Rory and Bryn’s love story. They are a bit of an odd match. Rory is a self-made tech billionaire who has relocated to small town Highland Hills, NC from New York City. Bryn is a third generation matchmaker who lives in Highland Hills and disillusioned with her family legacy. Rory wants to help Bryn and her sister with the AI for a matchmaking app they’re designing but as part of the deal he agrees for Bryn’s unpleasant grandmother to set him up on four matchmaker planned dates. The only problem is he is only interested in Bryn. On the way to their HEA there is growth for the characters especially for Bryn as she deals with her painful family and relationship baggage. The story included sweet moments, painful pasts, steamy scenes, quirky characters, supportive family and friends, character growth and missteps, heart clenches, fun, hilarity, healing, and love. I am excited to read more in this series.

Jessica Rau and Adam Verner did a phenomenal job narrating the story and characters into life with enough change of inflection, tone and cadence to voice multiple characters quite convincingly.

Excited for the next installment

I really enjoyed this match making story, Grandma is an awful person but I’m sure you knew that already. The female narrator did great, the male did good but was a Little to mellow for me , made me sleeping but he has a nice voice. Bryn and Rory

My First Book By This Author Qnd I Will Absolutely Read More! Outstanding Story With Great Characters!!!

I was beyond excited to see that the audiobook has two narrators!! Jessica Rau and and Adam Verner did a wonderful performance portraying Bryn and Rory. The variety of tones and inflections used for secondary characters were great too. I pictured Cole as a big ole teddy bear so his deep voice was spot on for me. The narrators elevated the story and I found myself giggling at a lot of hilarious scenes and swooning at the right moments.

Ohh!! You gotta meet Jane. She’s a handful and Jane is just a 8 year old kid! I can’t wait to see what the authors come up next in the Highland Hills series.
I would recommend this book to lovers of billionaire romance and romcoms. Such a great summer read too!