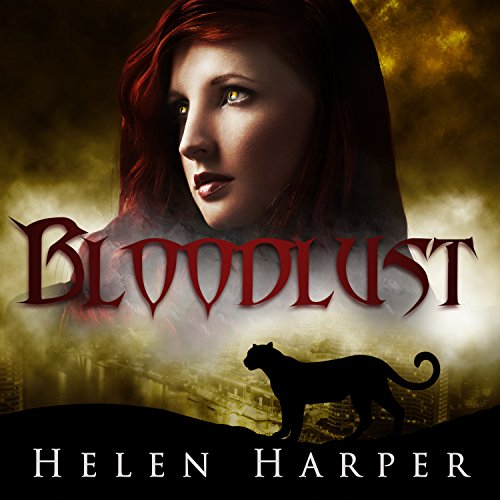 By: Helen Harper
Narrated by: Saskia Maarleveld
Try for £0.00

Life's no fun being a dragon, especially when you are forced into responsibilities that involve trying to keep the peace between an array of shifters, mages, and faeries in order to bring down the scariest and deadliest foe the Otherworld has ever seen. And that's not to mention the fact that your own soul mate hates your guts.

Mack Smith, a fiery Draco Wyr, is battling to come to terms with her emotions, her heritage, and her true capabilities. All she has to do is defeat Endor, win back Corrigan, and live happily ever after. From the streets of London and Russia to the beaches of Cornwall, will she ever be able to win the day?

What listeners say about Bloodlust

Brilliant, I've listened to the whole series. Loved it. The narrator was excellent, brought the characters to life. Definitely listening to more from this author. Now I'm gonna listen to Corrigan's half.
Oh no! Corrigan's half not available on Audible at the moment. Disappointed

Amazing and gutted it's the last book in the series

These books were very enjoyable. The narration was excellent. And so was the story, yes a little predictable but still great listening.

Yes, but I would suggest they need to listen to the whole series to get the most enjoyment.

Can't choose between Mack and Corrigan, they are both great characters and their relationship brings the series together.

What does Saskia Maarleveld bring to the story that you wouldn’t experience if you had only read the book?

It's nice to hear the characters brought to life.

Unfortunately, this final installment was a little bit of a dud for me. It started out alright, with some fun scenes that quickly deteriorated to the illogical. In a way, I was reminded of the first book a lot. Mack was obtuse in some seriously annoying and (to me) unrealistic ways, and the entire novel is centered around her anger and resentment at feeling like she has to be self-sacrificing. Added to this is the fact that, suddenly, she does not feel like it is appropriate to hold her friends accountable for their behavior! I don't know where this attitude came from, but she just kept rolling over for others and then complaining about it in her head the entire time. At one point, she justifies it because of her fear of being alone. That just DOES NOT wash with me. If she really felt concerned about being alone, she wouldn't have dropped her lifelong shifter friends (Tom, Betsy, Julia) without so much as a spare thought. Also .. Alex, Solus, Corrigan, Aubrey, the pink demon librarian, Mrs. Alcoon ... how is she alone?!

The bad guy is never really fleshed out this time around. He has got to be the least memorable of all the bad guys in this series, which is completely at odds with the fact that he's supposed to be the biggest nasty they've faced so far. What were his motives? He reminded me of a robot with no feelings that just went through the motions, as if he were just a vessel for someone else to work through.

Also, there are some very unnecessary scenes in this story, which is even more disappointing because of how well I thought the previous book was handled. There is a scene in an Unseelie club that just seems pointless, a sudden love interest for Solus that does not make any sense, and some random and sloppy gallivanting that could very well have happened behind the scenes.

I wanted to give the story 4 stars due to my relief at a happy ending ending and some closure on previously unexplored subjects, such as Mack's secret dragon nature and her mysteriously absent family. Honestly, with the way Harper had been increasing the severity of character deaths in the previous books, I wasn't expecting either Mack or Corrigan to be alive by the end of it all. Then again, maybe that's how it should have ended, because the bogus happy ending is really what dropped my rating down to 3 stars.

******Extreme Spoilers!!!!******
Before I address the ending, here's an example of Mack's rediscovered obtusity: after the first hour of this book, it will become painfully obvious to the reader that Mack is pregnant. In my experience, it is most definitely NOT the last thing on a woman's mind if she is a reproductively healthy female. Mack does not even admit to herself that there is a possibility she is pregnant, despite the fact that Mrs. Alcoon practically starts knitting baby booties and painting the spare bedroom in pastel colors. Barfing, stomach aches, detesting the smell of coffee, sudden uncontrollable shifting--come on! It would have been much more believable for Mack to recognize the possibility, then refuse to investigate out of fear or denial or putting it off because she's so busy being a martyr. Even in this scenario, we could have been introduced to her thoughts, worries, and curiosities on the subject. As it goes, Corrigan tells her she's pregnant in the last hour of the book--which I also find to be a ridiculous scenario--and she doesn't even have a "Holy crap, there's something invading my body and it's going to take over my life" moment. Her reaction is simply, "Oh, rats, I guess that makes sense! Babies are ... hmm. Well, time to go be badass again!"

Oh, and Corrigan! Talk about character backsliding! I know he was dumped publicly, but he becomes more of a hostile decoration in this book than anything. I can totally dig some good arguments, but he and Mack don't even have a real conversation until the big baby reveal at the end. Pardon me for not buying that for one second, by the way, seeing as how in the previous books they were drawn to each other like magnets and they are supposedly soul mates.

And the big happy ending? Yes, they fly off into the sunset together, but in doing so they abandon everyone they know and love. In what world is it better to leave everyone for the wolves and run away to live in hiding while simultaneously destroying your best friends' wedding? I never thought Mack and Corrigan would turn out to be cowards, but that's what this ending was. I wish they had found the inner strength to acknowledge that their own happiness was worth standing up for, even if it meant losing some political power or being criticized.

In fact, the ending doesn't make sense from any viewpoint to me. In the story, everyone depends on Mack uniting the races as a neutral power and Corrigan being a newer, gentler breed of Lord Alpha. With their faked deaths, the races will never remain united and the shifters may very well return to their old massacring ways. Despite their arrogant demands, there is no way the Summer Queen and the Arch Mage have the ability to force Mack to stay away from Corrigan--especially considering she's been pregnant with his babies the whole freaking time. That ship sailed waaaaay before they even got to the pier. As it stands, the pair end up leaving the world exactly as it was before their rise to power.

Why couldn't Corrigan just retire from being Lord Alpha and be Mack's right hand man? Why couldn't she marry Corrigan as Lord Alpha and have her children fostered in Fairyland every summer, then educated by the mages for the rest of the year in order to maintain a balanced relationship between the races? That little bit about dragonkind being cursed by auto assassins--well, there are ways to break a curse. If Mack could go off to Russia on the off chance of finding an almost extinct race of midget to get some precious metal that a friend of a friend read about in an old history document, then is it really so hard to believe in a happily married couple that kicks butt and saves the dragon race from genocide? Certainly not! Married couples can still have passion, witty dialogues, inner turmoil, and withstand hardships that separate family members under stressful circumstances. Just look at dual military families!

Helen Harper, if you read this, I hope you write one more book in which Corrigan and Mack return with some adorably chubby toddlers to fix these wrongs! BAH!

I loved the first two books in this series and was really disappointed with the 4th and 5th. I understand (I think) the reasons for the abrupt character changes, but there were too many and I ended up not liking Mac very much at the end. Such a shame because the series really started off great.

Great book that leaves you with a sense of satisfaction and happiness. I won't say more as I don't want to give any spoilers. just say this was a darn good read or listen as the case may be

I can't say enough about this looks serious. It's a must-read for everyone. I cried at the end when I read it and now and I listen to it. I am so happy Corrigan and Mack got their happy ever after. thank you Helen Harper for a fantastic book series and thank you Saskia for your unforgettable narration of this book series.

Helen Harper has outdone herself with her Blood Destiny series. I was not able to put each book down until I finished it. All her series are delightful- I very much look forward to more. Extremely creative!

I really enjoyed the last book!

I don’t understand why they were negative reviews about this book. I really enjoyed the whole series. ending was still great! All the authors books that I’ve read are great!

I was sad to have the story end with such a follow up possible with haw the story ends. What will the next series be, there kids or her brothers?

What a wonderful ending to a fantastic series!

Dragons, werepanthers, and others come to life as the tale is woven by Helen Harper. Extremely well worth the time to read any book by Harper, it's just that this series is so rich in everything that happens and who it may happen to.
Bravo HELEN HARPER!

Helen Harper is fantastic! Love this and her witch series. The humor and drama is well combined in a fantastically tough to turn off format.