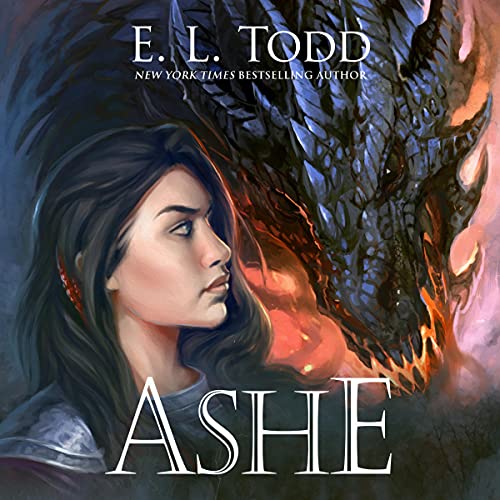 Cora's visit with the elves proves to be more than she bargained for. She learns her parentage, but it's the last thing she ever expected to hear. She came to the elves for help to defeat King Lux, to free the dragons still trapped in captivity, but she discovers a timeless place, where outside matters mean nothing. There's little chance to convince them of anything, especially when her human heritage has permanently marked her as an outsider.

Rush returns to Bridge to begin their plans, but there's also a fear in the back of his mind. Is she safe? Flare shares the same concern. Will they hurt Pretty?

Elven magic separates their borders, but perhaps the connection between Rush and Cora is enough to keep the channel open between them, to exchange thoughts and feelings, until she departs the forest and reunites with him once more.

Forces are moving in the world, and they have to move quickly before King Lux finds them both - and destroys them.

What listeners say about Ashe

I absolutely live this series. It has romance, adventure, fantasy, and surprises. I feel all the emotions of the characters so clearly!!!

Such a great world to tap into!!!! I am truly enjoying the ride.

I would have given 5 stars if Micheal Ferraiuolo would have and would read all the books. He is my most favorite narrator. The female narrator is not terrible but she is no where near as talented as Micheal F. The story is really good and interesting but MF makes it so much better. Also the writer needs to chill with all of the romance when the story is so good and we get how much they care about one another. It's a waste of space in the book.

I cannot wait for the next book to come out and come to audible. I will be counting down days until I can conclude this story and find out what happens between Rush and Cora!

I enjoyed the story a lot, but narrators were difficult for me and I almost quit a few times. Rush/Flare sound very feminine instead of majestic and masculine. Cora’s voice is whiny, almost petulant sounding like an immature teenager. I would have enjoyed the physical books more.

OMG this book was everything I dreamed of and more. I loved the character development. The plot thickens in the perfect way and E.L. Todd just weaves the perfect story. can not wait for the next and final installment of this series

Enjoyed having 2 readers. Story is fun! Can hardly wait for the next one, I've already pre-ordered

Then there was Dragons

Forget game of thrones. I love this series and can't wait for the next book. 😍

I love this story! I didn't want it to end and now I have to wait four book 3