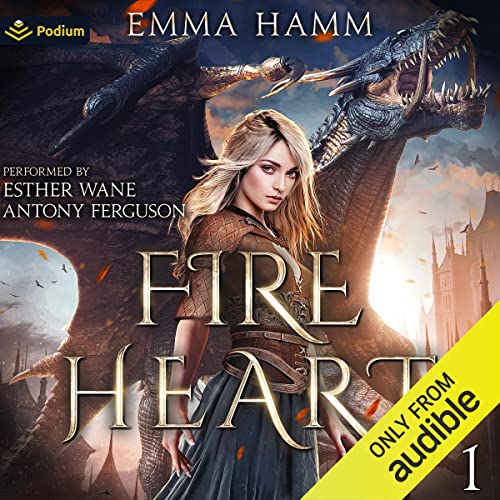 By: Emma Hamm
Narrated by: Antony Ferguson,Esther Wane
Try for £0.00

They handed her a sword and bid her to take a throne....

Lorelei is half elf in a kingdom where that bloodline is synonymous with "slave". The Umbra King holds everyone captive with his pet dragon who knows no mercy. She hides in the shadows and steals to stay alive, until a rebel group gives her an offer she can't refuse.

The King seeks a bride. If she can get close enough, she could drive a dagger into that wicked man's heart. But the bridal games are more difficult than most. Lorelei must prove herself not only beautiful, but talented, poised, and deadly as the king. However, the closer she gets to saving her kingdom, the more she realizes a singular problem stands in her way.

The King's bodyguard is more than a slathering beast. He's a man. And the longer she's near him, the more she realizes that perhaps the king isn't the most dangerous person in the kingdom. Perhaps she had to guard not only her body, but her heart. For a dragon mates for life, and they're hard pressed to give up their treasures.

What listeners say about Fire Heart

I really enjoyed this audio. Both narrators done a fantastic job getting the story across. They were very original and believable.
I got swept up in it and can't wait. Till. Next one

After finishing Heart of the Fae and Veins of Magic, I had to give Fire heart a read!

Absolutely fell in love with Emma’s work from the previous books I read, and this one has made me fall even more head over heels for her captivating writing and spell bounding stories!

The story of Lore and Abraxas was magnificent, and completely compelling. Lore, the heroine of the story, is an inspiration! Strong-willed and focused she marches through each chapter growing stronger than before. Abraxas, misunderstood and loving helps Lore to reach a common goal They both share. The slow burn between the two was excellent, and the characters introduced along the way absolutely helped to set the scene of the future books. I love how well written each character was, and how each of them was able to stand out amongst each other.

Eagerly waiting to read the next two books in the series!

A wonderful story with meh narration

This book wholeheartedly lived up to all the hype and my expectations going into it as a dragon loving Romantasy addict! I loved how both the story and romance unfolded. I fell hard for the MMC as both his story and the FMCs were never rushed, and their connection was really well fleshed out and believable. The lore weaved in is so well written and enchanting, I can’t wait to read the next one! I will say that the audiobook was a bit tough, it has two narrators and the female voice was great but the male reader lacked A LOT of inflection, almost like he didn’t read what he said so he didn’t know when to inflect? One of his voices was a bit over the top which was really distracting. I felt like his narration effected a lot of the story’s depth of emotion and that it was a much much better read without audiobook imo.

one that i will listen to many time's over

this was a very good story. this had everything.... but I male voice was a bit off I think. but I was still able to enjoy the story.

My goodness. It’s taken me weeks to get through this book. It’s not awful but it is not very good either. If I could do it all over again, I wouldn’t buy it. I feel bad writing this review bc I believe the author has talent.