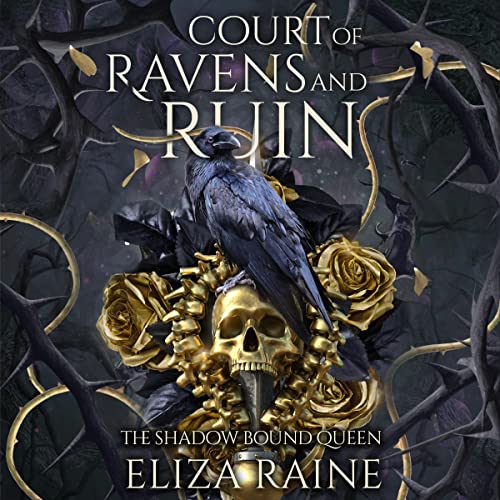 Court of Ravens and Ruin

By: Eliza Raine
Narrated by: Lia Holland
Try for £0.00

A defiant human woman. A dark fae Prince. Two enemies bound to a marriage that could destroy their world.

Reyna was born a valuable slave to the Gold Court, imprisoned her whole life in a glittering palace by sadistic, greedy fae.

When the palace is raided, she takes her opportunity to escape. But the raid is led by her worst nightmare. The Prince of the most feared fae of all; the Shadow Court. And he wants one thing.

Reyna doesn’t know why the Prince has kidnapped her. But when he announces her as his betrothed, she knows that she must escape before she is eternally bound to the monster behind the mask.

Only, when he takes the mask off, he isn’t what she expects. He’s lethal, beautiful and exudes sin. And he needs her.

Drawn into a deadly world shrouded in secrets, and desperate to keep her own hidden, Reyna must find a way out. If she doesn’t, she risks more than just death. She risks giving everything to her intoxicating captor.

This is the first book in the Shadow Bound Queen series, and is inspired by Norse mythology and Vikings. Sexy fae Vikings. It has Hades and Persephone, Beauty and the Beast vibes, and is slow-burn enemies to lovers fantasy romance with a burn-the-world-down-for-her hero. The series builds in steam and is filled with magic, myth, and delicious tension.

Brides of Mist and Fae is a brand new world from Eliza Raine, unconnected to the Dark Gods of Olympus.

What listeners say about Court of Ravens and Ruin

The lady reading the story had such a terrible narration that it literally out me to sleep every time I tried to listen. The book seemed like it was going to have a good story line but could not finish it. I returned the title.

The main female character is distrustful to the point of being annoying.

The MFC doesn’t weigh her pros and cons very well

Spoiler
Warding the headband, I think is dumb long term. Prince could rummage in her head or a psychotic queen could. - headbands fall off

Not wanting to confront the prince about her missing stuff, also silly.

I have more examples but that’s the gist.
Epitome of poor communication to make a story.

Great book, not my favorite narrator

I like the characters and the plot/world building the author gives us. I didn’t like how it just ended though, I’m a cliffhanger kinda girl!
The narrator isn’t so horrible that I couldn’t listen to her narrating the story she has a pleasant voice but her tone is the same though out the book, she didn’t give much of a performance which I would like to see if she narrates book 2. Overall, it is a great book and I will be on the lookout for book 2!