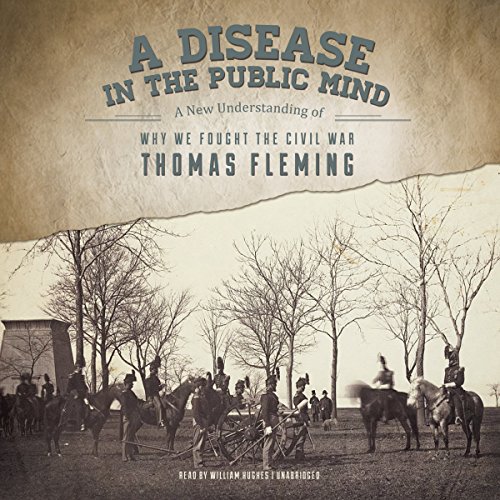 A Disease in the Public Mind

By: Thomas Fleming
Narrated by: William Hughes
Try for £0.00

By the time his body hung from the gallows for his crimes at Harper’s Ferry, abolitionists had made John Brown a "holy martyr" in the fight against Southern slave owners. But Northern hatred for Southerners had been long in the making. Northern rage was born of the conviction that New England, whose spokesmen and militia had begun the American Revolution, should have been the leader of the new nation. Instead, they had been displaced by Southern "slavocrats" like Thomas Jefferson. And Northern envy only exacerbated the South’s greatest fear: race war. In the 60 years preceding the outbreak of civil war, Northern and Southern fanatics ramped up the struggle over slavery. By the time they had become intractable enemies, only the tragedy of a bloody civil war could save the Union.

In this riveting and character-driven history, one of America’s most respected historians traces the "disease in the public mind" - distortions of reality that seized large numbers of Americans - in the decades-long run-up to the Civil War.

"The prolific Fleming, for decades a fixture among American historians, pinpoints public opinion as the proximate origin of the war.… Making a plausible presentation of antebellum attitudes and illusions, Fleming is sure to spark lively discussion about the Civil War." ( Booklist)

What listeners say about A Disease in the Public Mind

With Malice to none and charity to all.

A big thank you to author who through this book, has helped me, I think, to understand better the phenomenon of America.

This book highlights for me the rhythms and the rhymes in American history which resonate and continue even until today.

The very sad polarisation of the di-partite disease of the mind. The sanctimonious and vengeful on one side and the fearful of a race war on the other..

Abraham Lincoln, U.S. Grant, R.E. Lee and Oliver Wendall Holmes, among others, show us a spirit of malice to none and charity to all that we all need and have needed since the terrible inception of the peculiar institution. It should have never been allowed, but it was, and we are now left to grapple with how to deal with the fallout.

The book leaves us saddened and wondering how it might have been, at so many stages, if cooler, more forgiving and more moderate voices had prevailed on both sides at so many forks in our history. Perhaps, if Lincoln had lived to complete his second term and truly bring the nation back together.

Hopefully we live and learn to bring that kind of spirit to thr forefront in our national consciousness and conversation..

A warning for the United States today

This is a superb book that works at two levels. One is a history of the slavery issue from Independence until the end of the Civil War. The heroes are the people of goodwill, north and south (many of them slaveholders themselves) who saw the institution as an evil and sought ways to bring it to an end. The challenge was daunting if justice was to be done to all and would necessitate a gradual process that would depend on willingness to compromise. The villains were the extremists on both sides whose intransigence and willingness to resort to violence squeezed the moderate middle. In the end, the fanatics, North and South, made secession and war inevitable and the final resolution of the slavery issue proved less than satisfactory for both sides . At its deeper level this book is a warning about what happens when extremists demonize their opponent, are intransigent in their demands, reject conciliation and compromise, and push for confrontation. The parallels with what has happened in the US in the last two decades are terrifying. This book is a warning.

I do not share the author’s view of the abolitionists. Surely, they deserve better treatment than they get in this book.

That said, history is full of warring truths. This is not a lost cause polemic. Rather, it is a useful analysis of the evolution of what became an irrepressible conflict.

Slavery was a vast torture machine. It was also the foundation of enormous, historic wealth. And slavery was more than just a torture machine as the author asserts. It had many facets. Nevertheless, it was hideously cruel. The spiritual awakening that created abolitionism fixated in horror and righteous fury before this cruelty. It is fair to point out that fanaticism was also present in the abolitionist movement. John Brown was deranged. But to paint the abolitionists with broad stripes of fanaticism is unjust. The author flirts with this injustice. Remember the horror the abolitionists bore witness to. Their response was as intense as the horror.

But this gets to a key and vital point the author makes. The South lived in horror too. The slaughter of Haitian war with Napoleon felt like a real consequence to them should their slave system collapse - a vital reality to the southern white mind of that time. Combine that with the feared loss of the fabulous wealth of the slave plantation economy and therein lies a core of blood conflict.

I don’t buy into the author’s thesis. He blames the abolitionists mostly for the civil war. Wrong, but not crazy. I do believe he presents an important historic argument. Understanding it’s failings and strengths is why this book is worth a good listen.

The greatest weakness of this book is the lack of slave testimony. Slaves had agency. They fled cruel oppression. The North was flooded with their accounts. Such accounts were brutally suppressed in the South. But in the North normal people read the testimony, perceived the evil, and responded accordingly. I very much wish the author had wrestled with this issue. The slaves made their case and won. The slave masters made theirs and lost. Missing in this book.

I have read many books on the Civil War and its causes. It became obvious in the beginning of this book that the author does not take a neutral stance on the causes of the Civil War. Too much time is spent making excuses that many societies had slaves and trying to show that the North was not perfect. This is a flawed book that is pretty close to Lost Cause nonsense. Instead read The Apostles of Disunion.

While i found Fleming’s perspective of “Northern Aggression” interesting I also found it way too packed with his own opinion to think of this book as academically appropriate or even historically accurate. Yet i also think it’s important to get various opinions while trying to understand the wide scope of history. Read this with a skeptical eye.

What made the experience of listening to A Disease in the Public Mind the most enjoyable?

Well written history, told in a narrative form that is both insightful and interesting.

The context of the era helps to understand how the Civil War started and why it continued. A devastating series of events that we should be mindful of today.

Have you listened to any of William Hughes’s other performances before? How does this one compare?

It was a very thoughtful and sober analysis of the darkest period in our nations history.

I recommend this to anyone who was to understand the history of the US.

If you discuss 20th century diseases of the mind and not mention facism and nazism, there is something profoundly wrong with you.

What did you love best about A Disease in the Public Mind?

The reevaluation of Colonial thru Civil War history can never be over mined. Thomas Fleming deserves props for this refreshing examination of what was going on in America in regards to slavery. Many questions we face today including the politics of race are embedded in the discussion from this earlier period.

Thomas Jefferson was a compelling figure. A genuinely twisted individual.

The Haitian uprising and America's near hysterical silence on the matter.

Truly moment after moment the story was compelling. Reading about men moved from the colonial period to end slavery, and the end of slavery in the north. I was also surprised at how much history is neglected and forgotten in the modern narrative. When you finish this you realize that whole levels of understanding can be added to the Civil War and what it meant to American, then and now.

I had the pleasure of reading this, and then listening to it, both methods are satisfactory.

Review of A Disease in the Public Mind

Required reading in our time

The psychological atmosphere described herein is frighteningly familiar in the age of Trump. The whole idea of a "Disease in the public mind," which perceptive observers noted at the time of the civil war, seems to have infected us again.

His few examples of good masters can't save this w

If I were living in the south with a southern family history and I would agree with this history . But his poorly hidden few examples seem to be used as his support for slavery. But frankly honestly I have read many a book on this topic and I think it's mostly a misguided and dishonest work guided more by his personal beliefs then fact. Better to read the many other books like the pulitzer winning work by McPherson

One of the most important books I’ve ever read. It illustrates the importance of understanding and brotherhood over idealism and radicalism even in the face of insurmountable tragedy.