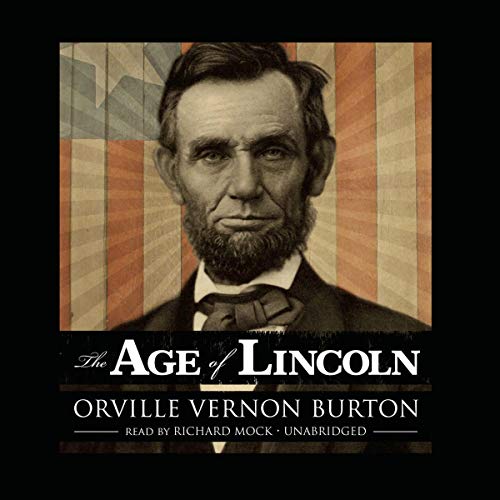 The Age of Lincoln

By: Orville Vernon Burton
Narrated by: Richard Mock
Try for £0.00

Distinguished historian Orville Vernon Burton suggests that, while abolishing slavery was the age's most extraordinary accomplishment, it was the inscribing of personal liberty into the nation's millennial aspirations that was its most profound achievement.

America had always perceived providence in its progress, but in the 1840s and 1850s, a pessimism accompanied a marked extremism. Even amidst historic political compromises, the middle ground collapsed.

Burton shows how the president's authentic Southerness empowered him to conduct a civil war that redefined freedom as a personal right to be expanded to all Americans. While the extent of that freedom would be contested in the violent decades to follow, its centrality to the definition of the country would not.

"For readers seeking to comprehend the sweeping social, religious and cultural backdrop to the Civil War, Burton's book is a worthy heir to Schlesinger's [The Age of Jackson]." (Publishers Weekly)

What listeners say about The Age of Lincoln

The Age of Lincoln is one of the most compelling and finely nuanced cultural histories of period. A master story teller, Burton weaves poignant stories of individuals and events that open up the complexity and texture of the period. Burton wonderfully captures the tensions created by slavery and freedom, territorial expansion and sectional conflict, economic realities and spiritual needs. Through deft portraits of individuals and events, he brings to life for the reader the promise of democracy, freedom, emancipation and Reconstruction as well as the horrors of war, Klan violence, lynchings, unchecked capitalism, and segregation.

Burton has the ability to explain complex social, economic and cultural tensions in elegant yet fast-paced prose. Perhaps the best example of this is his chapter on Reconstruction. I have not read a better or more cogent account of the Reconstruction era in one chapter. Burton takes a very complex historical era and makes it very clear and understandable without diminishing the complexity. This is a much needed book for our age since it helps us to understand the knotty and convoluted development of the American character and culture, woven from elements of both North and South, spiritual and commercial ventures, labor and agrarian unrest, immigration and industrialization.

If you want to understand Lincoln and enjoy a great narration, get this book.

One of the Best Civil War Books Available

This may be one of the best Civil War books I've ever read, simply because it deals with the culture surrounding the time period, not the war itself. Most Civil War books seem preoccupied with the battles and personalities. This book, however, deals with cultural, political and religious trends. By doing so it fleshes out the period much more vividly.

Late in the book, the author's bias comes into play regarding post Civil War industry. If it weren't for that as a disctraction, this would be a 5-star book. Consider this a 4.5 star, book, though. Well done overall.

This history places strong emphasis on the evils of slavery and the contribution of abolitionists and slaves in the war effort. There are many references to class struggle, but discussion of the Civil War is perfunctory. I would recommend reading Shelby Foote’s Civil War: A Narrative first (a book with an altogether different bias), using The Age of Lincoln as supplement. The book is well written, read and recorded.

This read and informed me like a tenth grade history textbook. OK for dry, superficial coverage.

This is a challenging book, hopeful, yet realistic in its view of America's progress after Lincoln. Did Lincoln set the stage for the rise of big business and monopoly? Have we failed to understand Lincoln's central vision of equal opportunity under the rule of law? Well-researched and written.