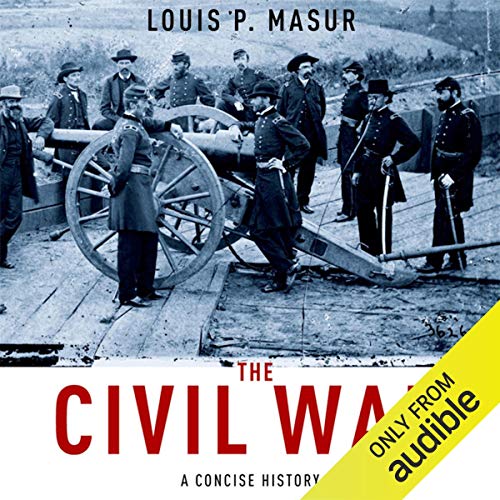 One hundred and fifty years after the first shots were fired on Fort Sumter, the Civil War still captures the American imagination, and its reverberations can still be felt throughout America's social and political landscape. Louis P. Masur's The Civil War: A Concise History offers a masterful and eminently listenable overview of the war's multiple causes and catastrophic effects.

Masur begins by examining the complex origins of the war, focusing on the pulsating tensions over states rights and slavery. The book then proceeds to cover, year by year, the major political, social, and military events, highlighting two important themes: how the war shifted from a limited conflict to restore the Union to an all-out war that would fundamentally transform Southern society, and the process by which the war ultimately became a battle to abolish slavery. Masur explains how the war turned what had been a loose collection of fiercely independent states into a nation, remaking its political, cultural, and social institutions. But he also focuses on the soldiers themselves, both Union and Confederate, whose stories constitute nothing less than America's Iliad.

In the final chapter, Masur considers the aftermath of the South's surrender at Appomattox and the clash over the policies of reconstruction that continued to divide president and Congress, conservatives and radicals, Southerners and Northerners for years to come.

In 1873, Mark Twain and Charles Dudley wrote that the war had "wrought so profoundly upon the entire national character that the influence cannot be measured short of two or three generations." From the vantage of the war's sesquicentennial, this concise history of the entire Civil War era offers an invaluable introduction to the dramatic events whose effects are still felt today.

"A short history of the Civil War is a daunting task to say the least, so complex and wide-ranging is the story, yet Louis P. Masur has accomplished the task not only with remarkable all-inclusiveness, but with considerable perception, and not a little genuine eloquence. The result is surely the finest account in brief compass that we have." (William C. Davis, Virginia Center for Civil War Studies, Virginia Tech)
"An ideal guide. Masur's deft touch is reflected in the judicious way he mines his material, which includes analysis for the set of illustrations included in the text. One finishes this book, whether read over the course of hours or months, with a sense of having traced the outlines of a vast historiographic territory." (History News Network)
"Masur performs a miracle by providing a concise but compelling narrative of the Civil War era, packing in the critical information to track the trajectory of secession, war, emancipation, and Reconstruction.... Highly recommended." ( Library Journal)

What listeners say about The Civil War

I'm not sure the author's focus is right with this one, as it's less a book about the war than a book about how the war changed America. That's fine, but isn't what I expect when I buy a book called "The Civil War".

I must say I found this book hard work. The narration is very flat and the text keeps going off-topic to a degree that, having listened to the whole book, I still don't know why the war started, what were the main events, and the key events that led to its' eventual conclusion.

As an example readers should check out "The Storm of War" which is an excellent production about WWII, and deals in depth, and very informatively, with the key events of that conflict.