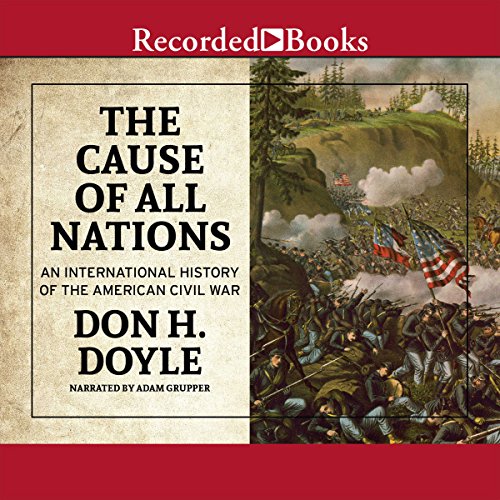 The Cause of All Nations

When Abraham Lincoln delivered the Gettysburg Address, he realized that the Civil War had taken on a wider significance - that in Europe and Latin America people were watching to see whether the democratic experiment in "government by the people" would "perish from the earth." In The Cause of All Nations, distinguished historian Don H. Doyle explains that the Civil War was more than an internal American conflict; it was a struggle that spanned the Atlantic Ocean. This audiobook follows the agents of the North and South who went abroad to tell the world what they were fighting for, and the foreign politicians, journalists, and intellectuals who told America and the world what they thought this war was really about - or ought to be about. Foreigners looked upon the American contest as an epic battle in a grand historic struggle that would decide the fate of democracy as well as slavery for generations to come. A bold account of the international dimensions of America's defining conflict, The Cause of All Nations frames the Civil War as a crucial turning point in the global struggle over the future of democracy.

What listeners say about The Cause of All Nations

Doyle meticulously uses a wealth of research to present the various international aspects of the US Civil War, from diplomatic maneuvering to public relations to military recruiting. All depended, in one form or another, on the arguments advanced by each side, and all played out, of course, within the specific contexts of the foreign audiences.

For European elites, especially Napoleon III and the Pope, who feared democracy, the South’s appeal to class and racial oligarchy was attractive. For the non-elites, most with fresh memories of the failed democratic movements of 1848, the North’s appeal to the rule of law and majority rule resonated deeply. When the North then combined that appeal with the goal of freedom, its appeal became overwhelming. Given that the major European powers had already abolished slavery, Confederate sympathizers could not risk being seen to support a revolt whose only purpose was the preservation of slavery.

Doyle’s international perspective sheds interesting light on the appeal of the early, and sometimes overly legalistic, arguments of the Union. The issue at stake was the principle of majority rule, which is why Lincoln spoke at Gettysburg about the survival of popular government on “the earth” and not just in the US. Doyle’s perspective also shows how this principle led to arguments for, and the acceptance of, abolition.

The Union’s success demonstrated the power and resilience of popular government, thereby giving encouragement to democratic movements throughout Europe.

Doyle’s book helps shed light on the ways in which the American War for Independence was, and was seen to be, a social as well as a political revolution. America not only shook off British rule, but also empowered the ordinary citizen, at least the ordinary white, male citizen. That move scared elitists, both abroad and in the South. It helped make the Civil War inevitable and created enduring tension with the European power structure. It also, as it was intended to do, provided inspiration to the unfranchised around the world.

A wonderful book on international reactions and issues pertaining to the American civil war, a must read for those seeking to understand the wider context of the war

An aspect of the Civil War that I was totally unaware.
Like Paul Harvey the journalist used to say “And that’s the rest of the story”.
The political and diplomatic battle between those of the North and that of the South trying to gain favor with the European countries to gain support and recognition of each position is story that is both complex and simple. It was slavery stupid!
Well written scholarly book we all should read lest our past needlessly repeat itself.