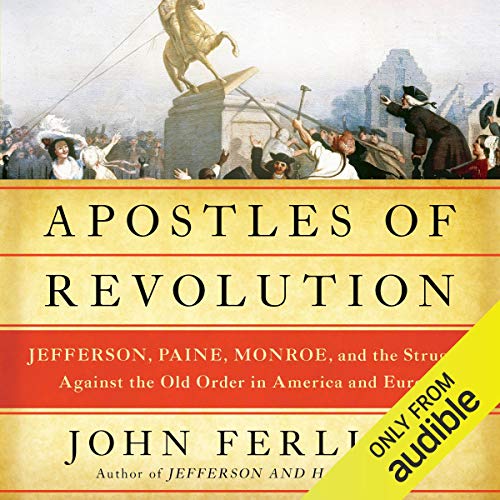 By: John Ferling
Narrated by: Noah Michael Levine
Try for £0.00

From acclaimed historian John Ferling, the story of Thomas Jefferson, Thomas Paine and James Monroe's championing of the most radical ideas of the American and French Revolutions.

Thomas Jefferson, Thomas Paine and James Monroe were in the vanguard of revolutionary ideas in the 18th century. As founding fathers, they risked their lives for American independence, but they also wanted more. Each wished for profound changes in the political and social fabric of pre-1776 America and hoped that the American Revolution would spark republican and egalitarian revolutions throughout Europe, sweeping away the old aristocratic order. Ultimately, each rejoiced at the opportunity to be a part of the French Revolution, a cause that became increasingly untenable as idealism gave way to the bloody terror.

Apostles of Revolution spans a crucial time in Western civilisation. The era ranged from the American insurgency against Great Britain to the Declaration of Independence, from desperate engagements on American battlefields to the threat posed to the young democracy by the Federalist's Tory leanings. With the French Revolution devolving into anarchy in the background, the story culminates with the tumultuous election of 1800, the outcome of which, Jefferson claimed, saved the American Revolution and assured that its most radical ideals would carry into the future.

Written as a sweeping narrative of a pivotal era, Apostles of Revolution captures the turbulent spirit of the times and reminds us that the liberty we take for granted is ours only because we, both champions and common citizens, have fought for it.

What listeners say about Apostles of Revolution

A bit of a challenging listen but well worth it

I’ve become more interested in what the founding father’s thought - what they ACTUALLY thought versus the Cereal Box versions that we get in school or through the enjoyable Hamilton musical. In fact, it’s interesting to learn more about Payne and even a bit more about Hamilton, who’s clearly a bit player in this drama. My favorite parts were about how much foresight these three had - especially about things like the ‘welfare state’ (not what they would have called it) and income inequality (again not what they were worried about). It appears that many of the problems we are still worried about today were on the minds of our Founders, and this story, as well researched as it seems to be is both enjoyable and educational.

Excellent Story of Three Great Men and Their Era

This book is an outstanding history. I have read it three times already. Ten stars!