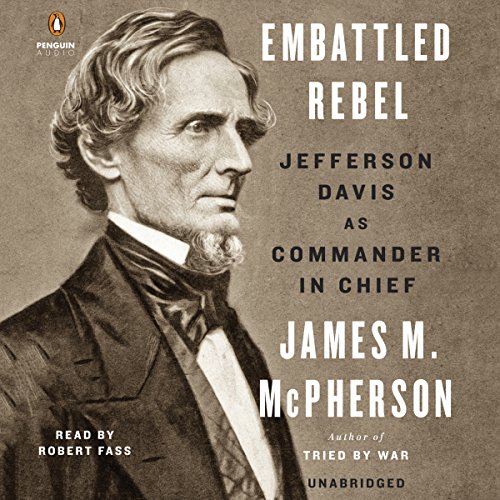 By: James M. McPherson
Narrated by: Robert Fass
Try for £0.00

From the Pulitzer Prize-winning author of Battle Cry of Freedom, a powerful new reckoning with Jefferson Davis as military commander of the Confederacy.

History has not been kind to Jefferson Davis. Many Americans of his own time and in later generations considered him an incompetent leader, not to mention a traitor. Not so, argues James M. McPherson. In Embattled Rebel, McPherson shows us that Davis might have been on the wrong side of history, but that it is too easy to diminish him because of his cause’s failure. Gravely ill throughout much of the Civil War, Davis nevertheless shaped and articulated the principal policy of the Confederacy - the quest for independent nationhood - with clarity and force. He exercised a tenacious hands-on influence in the shaping of military strategy, and his close relationship with Robert E. Lee was one of the most effective military-civilian partnerships in history.

Lucid and concise, Embattled Rebel presents a fresh perspective on the Civil War as seen from the desk of the South’s commander in chief.

What listeners say about Embattled Rebel

From the other side

What an excellent book. To see the south cave in on itself without harsly a mention of the north. The wsr only dragged on because the south didn't surrender in 1862 at the earliest and 1863 at the latest.

Civil War scholar and Pulitzer winning (“Battle Cry of Freedom” 1988) author James M McPherson has taken a fresh look at a subject with whom he is eminently familiar: the life and times of Confederate President Jefferson Davis. With open minds in short supply these days the author takes a big risk in challenging past postulations. Many still consider Davis a traitor.

McPherson has methodically, without emotions written this short book. It is obvious he has conducted an enormous amount of research in preparation to write this story of Davis. This is not a biography in the traditional since as details of Davis’s life before Secession and his fate during Reconstruction are not covered.

McPherson claims Davis was not an inept leader as many historians have claimed. Davis was a graduate of West Point and had served in the Mexican War. The author states that the south also had problems with its Generals. He compared the tentative George B. McClellan to the backpedaling Joseph E. Johnston. While he documents that Davis made his share of mistakes and was an impolitic politician, McPherson concludes that Davis devised a credible strategy for fight the war. The South’s material and manpower handicaps are well known, but McPherson list other obstacles such as the Southerners were anything but united. The “States Rights” mantra often inhibited coordinated military tactics. The author covers the 1862 threat by Arkansas to secede from the Confederacy and in 1863 North Carolina’s leaders favored negotiations. On top of this Rebel soldiers deserted in droves.

McPherson’s overall evaluation of Davis is fair-minded. He criticizes Davis but also points out some favorable points. The book’s worth a read particularly for those interested in the Civil war. Robert Fass did a good job narrating the book.

Jefferson Davis is a captivating figure. I have often wondered how I would feel about him if the South had won the war. I bought this book because I wanted to get a feel for Davis like I have for Lincoln; to see his personality and his relationships. I was a little disappointed in this book precisely because it largely ignores those aspects of his life. I need to curb my disappointment a little however, because it is clear that this was not the intention of the author. This book only covers Jefferson Davis as commander in chief, there is no biography about his life before or after the war. Neither does it delve into pressures outside of his office during the war; the death of his five year old son only gets a sentence and his wife is rarely mentioned. I didn't feel like there was a lot in this book that wasn't in battle cry of freedom, or other more general books about the civil war.

That said, I still enjoyed the book, and I would recommend it to anyone who knows little about the civil war, and is looking for a view of it from the South's perspective.

How McPherson Lost His Reader

More insight into Jefferson Davis as a person. This was not a biography so much as an overview of events.

Has Embattled Rebel turned you off from other books in this genre?

Not at all. I'm a history buff. Perhaps that's why this book didn't teach me anything new; the general overview of the war was too thin to educate anyone with a general sense of events, and also too thin as a biography. It was neither here nor there.

What does Robert Fass bring to the story that you wouldn’t experience if you just read the book?

He did a good job emphasizing key points, and kept me listening despite the lackluster text.

If you could play editor, what scene or scenes would you have cut from Embattled Rebel?

I'd cut a lot of the information on the war itself and replace it with more meaty information on the man Davis. Team of Rivals, for example, offers real insights into Lincoln's character while keeping the reader appraised of key events in the war.

Not a book for anyone hoping to get real insights into Jefferson Davis. That book is yet to be written, apparently.

There isn't much about Jeff Davis on Audible, which is a shame since he's such an interesting person and important person in American history.

The reader does a good job, fits the tone of the book.

BTW 4 stars means the book is enjoyable and good, but I can't really give it 5 stars since it doesn't cover enough material. If you're interested in Davis there is another full autobiography of Davis available on Audible, I'd highly recommend checking that out even if it's not written as well and the reader isn't very good.

A mile wide, an inch deep.

I thought this was going to be a biography, however it was simply an overview of the war from the south’s side. The author never actually analyzes Davis, he only tells us what he did, not why.
After reading many works on the civil war I thought this would be an interesting angle to explore. Unfortunately Jefferson Davis is as much a mystery to me now as before I listened.

All about battles, gets repetitive and boring, only read it for extra credit for school.

Does not provide much details of the battles but does an excellent job introducing the commitment and struggles of Davis. As a student of history for over 30 years I was surprised of the things that I did not know about Davis and his government that this book presented. Excellent Narration.

Not enough about Davis

The reviews relating to the book's focus on wartime strategies and less about Davis' personal life during the war have it right. For that reason its short lengthy make it worthwhile but a close call for individuals that want to learn something about Davis. For instance, the author spends two lines discussing the death of one of the Davis children during the war. Upon completing the book you would know nothing more about this child or the other Davis children.

A short and effective read of Davis

This work is not a biography of Jefferson Davis, but rather a treatment of Davis as commander in chief. It's a short read and a great introduction to the command structure of the Southern Army and Davis' relationship with many important generals.

First rate bio of an American traitor. 650000 dead. Why wasnt Jeff Davis hanged?
This book indicts but omits any explanation why he was set free.