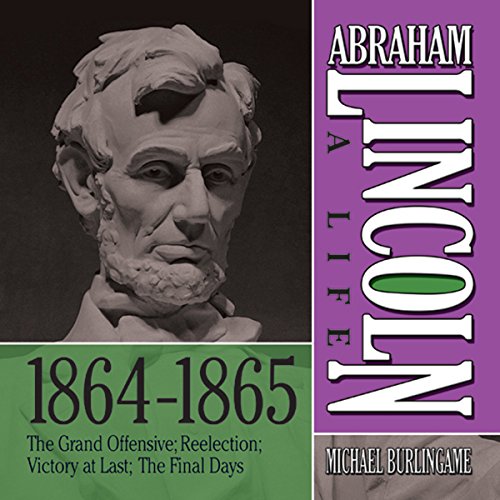 By: Michael Burlingame
Narrated by: Sean Pratt
Try for £0.00

"Hold On with a Bulldog Grip and Chew and Choke as Much as Possible": The Grand Offensive: (May–August 1864): The Spring Offensive is launched. A bogus presidential proclamation calling for volunteers and prayers causes panic throughout the North. Grant and Lee battle for six weeks until severe losses force them to a halt. Congressional Radicals pass a bill that will allow Southern States readmittance to the Union as long as they give an oath that they never supported the Confederacy. Southern leaders spread bogus peace overtures. Lincoln reaffirms his commitment to the Emancipation.

"The Wisest Radical of All": Reelection: (September–November 1864): McClellan is nominated by Democrats to run against Lincoln. Democrats launch a personal attack against Abraham and Mary Lincoln. The president defines the significance of the Union’s cause. Maryland celebrates the Emancipation. The national election is held despite the war. Lincoln wins a second term.

"Let the Thing Be Pressed": Victory at Last: (November 1864–April 1865): Chase is appointed Chief of Justice. The Bixby letter is written. Lincoln drafts his annual message to Congress. The president is hounded by office seekers, only finding solace in music dramas. Plans are made to secure the 13th amendment. The Hampton Roads Conference fails to negotiate an end to the war. Lincoln gives his second inaugural address and visits the army front. Richmond is captured and the rebels are finally defeated.

"I Feel a Presentiment That I Shall Not Outlast the Rebellion. When It Is Over, My Work Will Be Done." The Final Days: (April 9–15, 1865): Lincoln predicts that he will not live long after the war. He begins to deal with the issues of Reconstruction. The president carries out what is to be his last public speech and final cabinet meeting. White supremacist John Wilkes Booth is enraged at the proposal of blacks becoming citizen-voters. His belief in white superiority and hatred of Republicans drives him to conspire against the government. On April 14, 1865, Booth assassinates Lincoln in Ford’s Theater. The nation goes into mourning.

"Lincoln scholars have waited anxiously for this book for decades. Its triumphant publication proves it was well worth the wait. Few scholars have written with greater insight about the psychology of Lincoln. No one in recent history has uncovered more fresh sources than Michael Burlingame. This profound and masterful portrait will be read and studied for years to come." (Doris Kearns Goodwin)