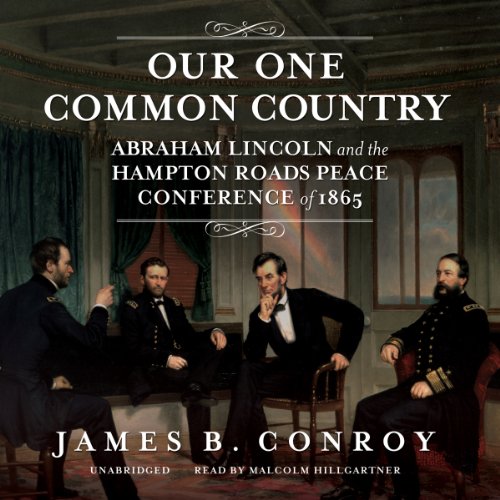 Our One Common Country

By: James B. Conroy
Narrated by: Malcolm Hillgartner
Try for £0.00

Our One Common Country explores the most critical meeting of the Civil War. Given short shrift or overlooked by many historians, the Hampton Roads Conference of 1865 was a crucial turning point in the War between the States. In this well written and highly documented book, James B. Conroy describes in fascinating detail what happened when leaders from both sides came together to try to end the hostilities. The meeting was meant to end the fighting on peaceful terms. It failed, however, and the war dragged on for two more bloody, destructive months.

Through meticulous research of both primary and secondary sources, Conroy tells the story of the doomed peace negotiations through the characters who lived it. With a fresh and immediate perspective, Our One Common Country offers a thrilling and eye-opening look into the inability of our nation's leaders to find a peaceful solution. The failure of the Hampton Roads Conference shaped the course of American history and the future of America's wars to come.

What listeners say about Our One Common Country

This is the first book written about the Hampton Road Peace Conference of the Civil War. President Abraham Lincoln and Secretary of State Seward met with three representatives of the South to negotiate a peace. The Confederate representatives were Confederate Vice President Alexander H. Stephens, Senator Robert Hunter and former U.S. Supreme Court Justice John A. Campbell.

Conroy details the events leading up to the conference, during the conference, and after the conference. The book illuminates the conflicting, passionate views on the Civil War.
Conroy’s research of the topic is quite impressive, he drew on private journals, official notes, and newspapers reports and archived documents. Conroy writes about the statistics but also mentions long forgotten soldiers, such as Pvt. George Deutzer of the 48th Pennsylvania Volunteers who lost his life, when one the cease fires attendant to the peace conference ended. Throughout the book Conroy has information on the common soldier and civilians, their names and what they were doing, to make the story come alive.

Conroy details how the conference was paralyzed by hyper-partisanship, zealotry, and personal pettiness. The author vividly captures the hope, weariness, despair, and anger and the complexity of feelings on both sides. The author gives most of the blame for the failure of the peace negotiation on the Confederate President Jefferson Davis.

I enjoyed this book in many ways it read like a novel. I think it would make a great movie. If you are interested in the Civil War this is a must read book. Malcohm Hillgartner did an excellent job narrating the story.