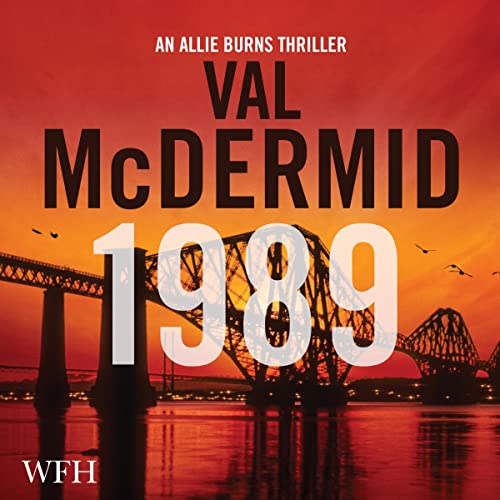 By: Val McDermid
Narrated by: Katie Leung
Try for £0.00

Older and maybe wiser, she's running the northern news operation of the Sunday Globe, chafing at losing her role in investigative journalism and at the descent into the gutter of the UK tabloid media.

But there's plenty to keep her occupied. The year begins with the memorial service to the victims of the bombing of Pan Am Flight 103, but Allie has barely filed her copy when she stumbles over a story about HIV/AIDS that will shock her into a major change of direction.

The world of newspapers is undergoing a revolution, there's skulduggery in the medical research labs and there are seismic rumblings behind the Iron Curtain. When kidnap and murder are added to this potent mix, Allie is forced to question all her old certainties.

"McDermid is at her considerable best." (Guardian)

"A brilliant novel by a supremo of the genre." (Peter James)

What listeners say about 1989

This is Val McDermid at her best and that is really saying something.
Excellent storyline and narration. One of the best books I’ve listened to in a very long time.

I really like the Ali Burns, journalist, character, and I am sure she will appeal in particular to many readers/listeners who were, like me, born around the same time. All the music references, and work practices from the period are so familiar. A good, entertaining story which perhaps involves the suspension of belief in parts, but then that’s what we are here for, aren’t we?
I was pleased to see the development of the relationship with girlfriend Rona, though I did feel she might need a bit of development as a character.
Katie Leung’s performance is good with the Ali and Rona voices, and other Scots characters. The accents needed for this book though I thought were disappointing. The “posh” older man Ace Lockhart, and his daughter were just about tolerable, but the (many) German characters were laugh out loud. My main criticism though is the very many, bizarre examples of emphasis being put in the wrong place. A lot were obviously expressions of the period, probably unknown to Leung. But some were perfectly normal expressions that left you baffled. For example someone was wearing a “crew neck sweater”. The emphasis was heavily placed on the word “neck” and I actually had to pause and ask myself “what is a neck sweater, and who are the crew?” There were so many examples of this that it became something you were listening out for, and thus distracting.
But I am already looking forward to the next Ali Burns.

Fantastic read again. Allie Burns is a fantastic character, the story, of course, so well written by Val McDermid. Taking me back to the 80s in a fresh way, keeping me guessing until the end. Thank you, can’t wait, but will have to, fir the next book!

Great story, brings back so many m memories of that time. Would be great if this and the previous book of the series were made into a TV series

Really enjoyed this blend of history and fiction

Not only was this well paced and a satisfying read, but it was highly credible and very nostalgic. It provides an interesting ‘what if’ as a footnote to a certain notorious media magnate. Excellent!
Also, well narrated.
Extra bonus for the playlist at the end!

Couldn't put it down!

Great narrator! Gripping story and really connected with the characters.
Really enjoyable, at times emotional, mix of fiction and fact, made the book difficult to pause. Every time I had to stop, I felt I was waiting for my next quiet moment to be able to pick it up again.

Seemed long at times and a bit slow to start but although I had an idea where the story was heading early on I couldn’t stop listening until it finished. I would enjoy reading more of the future of our heroine.

I really enjoyed this, meticulous research and reminder of the eighties. This book was not afraid of addressing complex issues and I love the character development.

The story is very predictable and quite boring. Big let down from the normal Val McDermot standard.

Kept me close throughout

Great story and narration. Looking forward to next book in the series. Coming from Glasgow, I could picture the scenes well.