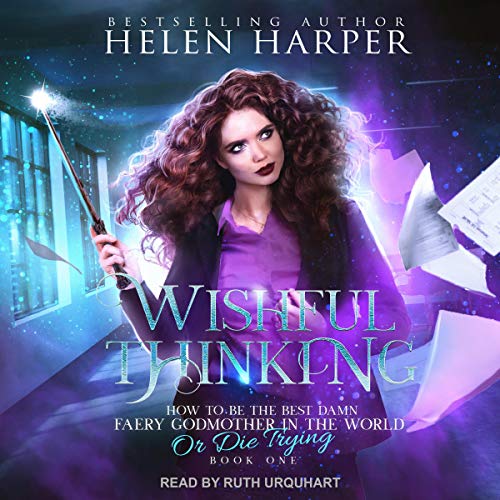 By: Helen Harper
Narrated by: Ruth Urquhart
Try for £0.00

Muddled magic. Missing faeries. She's having one spell of a day at work...

Saffron Sawyer aspires to rise from the magical world's bottom rung. But when her wish to join the renowned Office of Faery Godmothers is granted, bullies make her first day on the job unbearable. And to add to her misery, she discovers that someone is abducting her coworkers one-by-one.

Desperate to prevent another kidnapping, she scrambles to piece together the clues. After teaming up with the handsome and powerful Devil's Advocate, she uncovers a strange connection between the disappearances and her lowly former gig. But when Saffron learns her promotion was only a ploy, she vows to ruin the devious plan.

Can Saffron muster enough magic to trap the villain before she's sacked or stolen?

What listeners say about Wishful Thinking

I’m becoming a big Helen Harper fan. I like books that are fun, some mystery, magic, and a bit of romance. This book has it all.

Ruth Urquhart did a fine job.

On to book two.

I love all the works of Helen harper Great story as usual!
The story keeps you wanting more I hope there is a pt2

Love hellen's books they are all amazing and just enough steam love and darns and action to keep me going anting more.

Tropeless! The heroine is original and feels realistic. The whole thing is really fun and Really well written

Another good one from Helen Harper!

I've listen to this whole series now and it's another winner from Helen Harper. I really enjoyed this series. It has a lot of humor, suspense, and a nice romance between the main characters. The main character will make you laugh. I blew through all four of the books very quickly. Quite enjoyable!

Cute-ish start to a new series.
Saffron Sawyer is the best Dope Faery who has gotten her dream of becoming a Faery Godmother. Only problem is, she was hired as bait for whoever has been kidnapping godparents. She’s not a legacy hire from a wealthy or prominent family, so she’s considered expendable. What can a woman do but become the best darn faery ever? Things quickly start happening when Saffron steps on board. We get the thought of an attraction with Jasper, the Devils Advocate (?) keeping an eye on the situation using a department audit.
Urquhart does a decent job of narration.